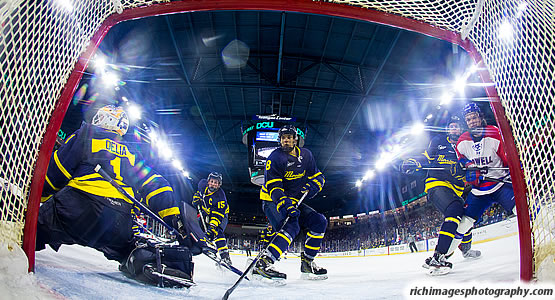 WAKEFIELD, Mass. - The Hockey East Association announced today the new playoff format for the 2018 Hockey East Tournament at the league's annual media day held at TD Garden. The playoffs will begin with two best-of-three series at campus sites before moving to the TD Garden for the 34th annual championship weekend March 16-17.

"We return to the format last used in 2014," said Hockey East commissioner Joe Bertagna. "It will create a number of late-season 'races,' for first, fourth, fifth and eighth, each with identifiable benefits."

All 11 teams will once again make the playoff tournament. The five highest seeds will all receive byes into the quarterfinal round, while seeds four and five will be guaranteed to play each other at the higher seed's arena on the second weekend of the playoffs. Seeds six, seven, and eight will host seeds nine, 10, and 11 in the opening round, March 2-4. The three winning teams will then be reseeded and travel to the top three seeds for quarterfinal match ups, March 9-11.

Semifinal tickets include admission to both semifinal games. Winn ers of the semifinals will advance to the Hockey East title game, set for 7:00 p.m. Saturday, March 17, to determine the winner of the Lamoriello Trophy. Student tickets, located in the upper balcony, will be made available for $10 when showing a valid student ID, either on campus or at the TD Garden Box Office. Groups of 15 or more are also eligible for a $5 discount on $17 balcony seats and a $7 discount on select loge seats. All discounted tickets must be purchased at the TD Garden Box Office. To take advantage of group discounted tickets, contact the TD Garden group sales department at 617-624-1805 or groupsales@tdgarden.com. Tickets will become available on school campuses beginning on Monday, March 12 when the four remaining schools are identified.

The Hockey East Association is an 11-team Division I college men's hockey conference founded in 1984 and a nine-team Division I women's league which began play in 2002-03. The men's league has won nine NCAA championships in the past 24 years including Providence College in 2015 at TD Garden in Boston. Since 1999, Hockey East has won seven NCAA Championships with 15 NCAA Championship Game appearances, while placing 25 teams in the Frozen Four and 65 teams in the NCAA Tournament during that time. Overall, Hockey East has sent 109 teams to the NCAA Tournament since its inaugural season, more than any other conference in that span.