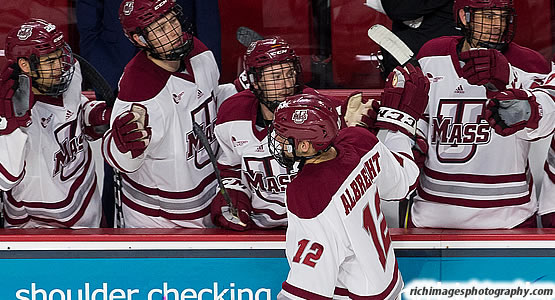 - Northeastern (14-5-3, 10-3-1 HEA) enters the weekend series with Massachusetts unbeaten in its last nine outings (7-0-2) while also riding a six-game win streak against the Minutemen. A win would put the Huskies back in the top spot in the Hockey East standings as Boston College (11-9-3, 11-4-0 HEA) is off this weekend.

- Northeastern forwards Adam Gaudette (Braintree, Mass./1.59) and Dylan Sikura (Aurora, Ontario/1.58) currently sit first and second in the NCAA in points-per-game and were both nominated for the Hobey Baker Memorial Award earlier this week. Gaudette currently holds the longest point streak in Hockey East, registering at least one point in his last eight games (9g, 8a).

- The Minutemen (10-10-1, 4-6-1 HEA) are 1-2-1 in Hockey East play in the new year after a capturing three points at Vermont last weekend. Freshman defenseman Cale Makar (Calgary, Alta.) scored in both games against the Catamounts and added one assist for three points. Makar also blocked four shots and tallied 12 shots on goal to end the weekend with a plus-two rating to claim Pro Ambitions Rookie of the Week honors.

- Goaltender Hayden Hawkey (Parker, Colo.) was named the Hockey East Defensive Player of the Week for the third time this season after backstopping the Friars to a 1-0-1 weekend, making 50 saves on the road.

- Providence forwards Erik Foley (Mansfield, Mass./13g, 15a) and Brian Pinho (North Andover, Mass./10g, 13a), who have led the team in scoring this season, were nominated for the Hobey Baker Memorial Award earlier this week.

- One of the longest-standing Hockey East rivalries is set to take place at Alfond Arena as the New Hampshire Wildcats (9-11-2, 4-7-1 HEA) venture north for a two-game series at Maine (12-9-2, 6-6-1 HEA). New Hampshire has won six straight in the series versus Maine, and have a 7-2-1 advantage over the last 10 meetings.

- The Wildcats are currently in a stretch where they have gone 0-6-1, although just three of those seven contests have come in Hockey East play (0-3-0).

- Last weekend, UNH goaltender Daniel Tirone (Trumbull, Conn.) became the Wildcats' all-time gamesplayed leader when he started his 113th game in between the pipes at Boston College on Sunday. He also leads all Hockey East goaltenders this year with four shut outs.

- The Black Bears were edged by Northeastern in a two-game series on the road last weekend, snapping a nine-game unbeaten streak for Maine and extending Northeastern's own unbeaten run to nine.

- Maine picked up a 3-1 win in a mid-week tilt at home against UMass, moving to within four points of fourth place in the Army ROTC Hockey East Standings.

- Boston University (9-11-2, 7-7-2 HEA) and Merrimack (7-11-4, 4-7-2 HEA) will meet for the first two of three regular season games scheduled for this season. The teams meet again on Feb. 17. The Warriors swept the Terriers in two outings last year and are 4-2-2 in their last eight against Boston University.

- Merrimack has had a strong run of late, going 5-2-1 in its last eight outings dating back to Dec. 8. Brett Seney (London, Ont.) has nine points in that span (2g, 7a) and has factored in on all five game-winning goals for the Warriors during the recent run, scoring one and setting up the other four.

- After a three-point weekend in league play last weekend, BU sits tied for fourth in the Hockey East standings. Bobo Carpenter (North Reading, Mass.), tied for third in league scoring (10g, 5a), scored both Terriers goals in a 2-2 draw with Providence on Saturday. The goals pushed his team-leading total to 11 on the season.

- UMass Lowell (13-10-0, 8-6-0 HEA) and Vermont (4-14-4, 1-8-3 HEA) will close a three-game regular season series this weekend with two tilts at Gutterson Fieldhouse. The teams met at the Tsongas Center Jan. 5, where the River Hawks blanked the Catamounts, 6-0. The outing marked goaltender Christoffer Hernberg's (Espoo, Finland) third shutout on the season.

- The River Hawks return to Hockey East play after a non-conference split at Arizona State last weekend. Ten out of the final 11 regular season match ups will be in league play for UMass Lowell, with only a Feb. 6 date with American International remaining on the season slate.

- The Catamounts wrap a four-game home stand this weekend after earning one point against Massachusetts in a two-game set last weekend. In a 2-2 draw against the Minutemen, Vermont got a pair of third period goals from Derek Lodermeier (Brooklyn Center, Minn.) and Matt O'Donnell (Fountain Valley, Calif.).