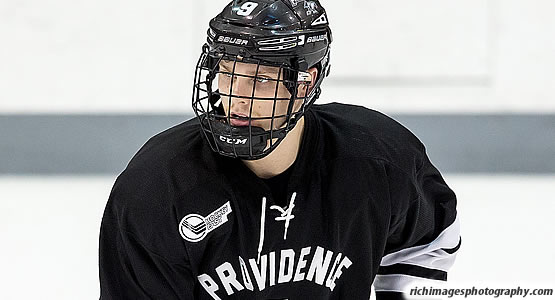 AROUND HOCKEY EAST: UMass started the 2015-16 season with a bang, taking two games from Colorado College at World Arena. Minutemen rookie Austin Plevy poured in four goals, including a hat trick and two game-winners, and added an assist in an explosive weekend for the freshman. His game-winning strike with 3:07 left in the third period Saturday night completed a four-goal rally to lift UMass over the Tigers, 4-3. UMass senior forward Shane Walsh also netted three goals on the weekend as part of a five-point road trip, scoring two of his goals within 2:07 of the third period to spark UMass's four-goal rally ... UConn freshman Max Letunov recorded a hat trick in his collegiate debut to help UConn to a 5-2 win over Alabama-Huntsville Friday night, including the game-winner ... No. 2 Boston University freshmen Charlie McAvoy and Ryan Cloonan each scored the first goal of his collegiate career in Saturday's loss to Union ... Defending NCAA champion No. 7 Providence opened the year by taking three points from Miami on the road. Senior forward Trevor Mingoia recorded six points (2g, 4a) in the two games while sophomore defenseman Jake Walman registered three points (1g, 2a) in the two games. The series was a rematch of last season's NCAA East regional semifinal ... UMass Lowell head coach Norm Bazin picked up his 100th career win as a head coach Friday night as the River Hawks defeated RPI. Junior forward Evan Campbell recorded two points (1g, 1a) in the 3-0 shutout win as senior goaltender Kevin Boyle kicked out all 27 shots he faced ... Northeastern's Nolan Stevens scored a highlight-reel, game-winning tally to help the Huskies over No. 20 Colgate Saturday night. Junior goaltender Derick Roy stopped 16 of 17 shots faced in the victory ... No. 1 Boston College bested Army, 5-1, before falling to RPI, 2-1. Sophomore forward Zach Sanford notched a power-play goal in each game for the Eagles, while freshman forward Miles Wood scored a goal and added two assists in his first game with BC ... New Hampshire picked up a 7-3 win over American International Saturday night behind a four-point outing from junior forward Tyler Kelleher (2g, 2a). Sophomore goaltender Danny Tirone stopped 26 of 29 shots to backstop the Wildcats to their first win of 2015-16 ... Vermont kicked off 2015-16 at the U.S. Hockey Hall of Fame game, traveling to play No. 8 Minnesota. Catamount junior goaltender Mike Santaguida stopped all 24 shots to record a shutout on the road, while junior forward Mario Puskarich netted a pair of goals at Mariucci Arena. 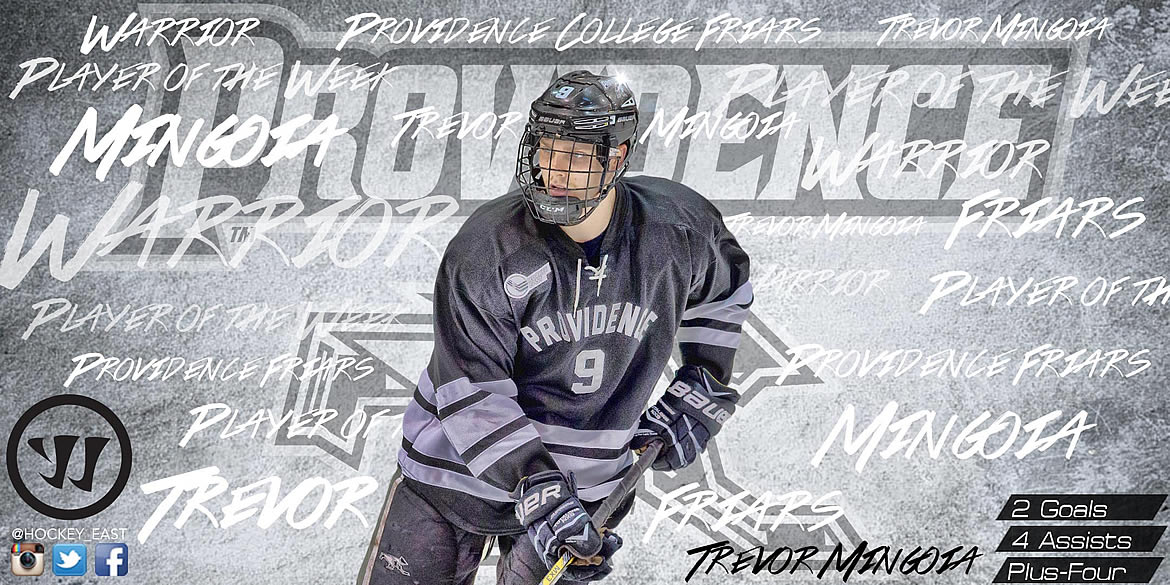 Mingoia began his 2015-16 campaign by racking up six points (2g, 4a) in two games at No. 11 Miami, including converting on a penalty shot Friday night. His four points Friday (2g, 2a) were a career high, while he assisted on both Friar goals Saturday in a 2-2 tie. He finished plus-four with eight shots on net. 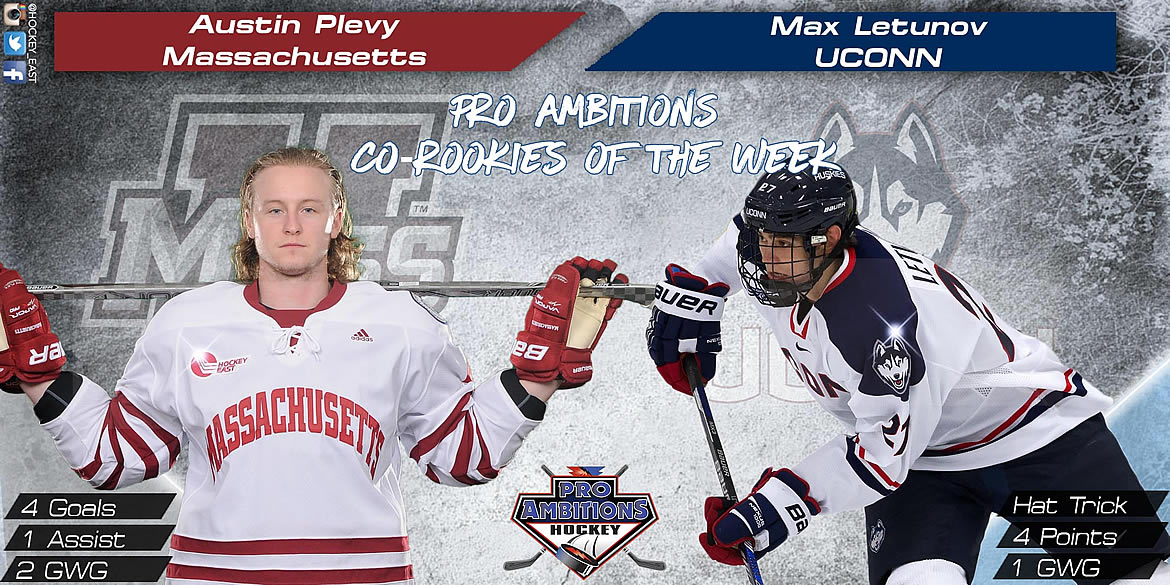 Plevy registered five points, including four goals, a hat trick, and two game-winning strikes, in two games at Colorado College. He capped a UMass rally with a GWG with 3:07 remaining in the game Saturday night.

Letunov kicked off his Husky career with a four-point weekend, scoring a hat trick in his UConn debut. He added an assist in the second game to help his team to a weekend split at Alabama-Huntsville. 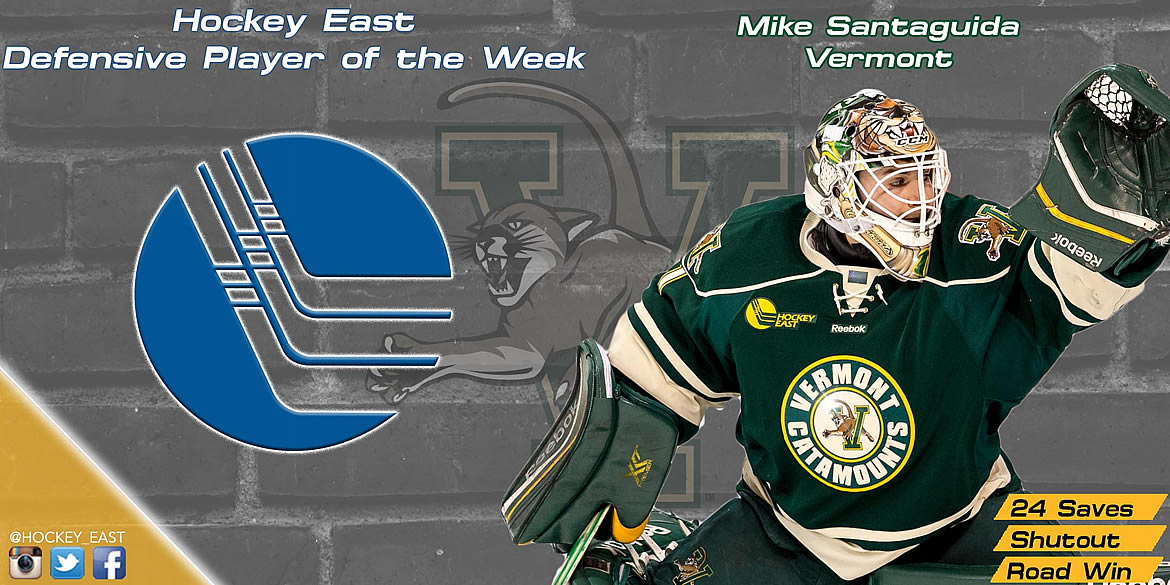 Santaguida stopped all 24 shots he faced on the road at No. 8 Minnesota to backstop the Catamounts to a 3-0 victory in the U.S. Hockey Hall of Fame game at Mariucci Arena. It was the fifth shutout of the junior goaltender's career as he denied each of the Gophers' four powerplay opportunities.

Casey Fitzgerald, BC (Fr., D; N. Reading, MA) Scored a power-play goal and dished out an assist in his first game as an Eagle.

Nic Reynard, UMass (Fr., G; Victoria, B.C.) Kicked out 45 shots and recorded an assist in his college debut, picking up a win at CC.

Matt Dawson, UNH (Fr., D; Delta, B.C.) In his debut, scored a goal and added an assist to finish plus-two on the night.