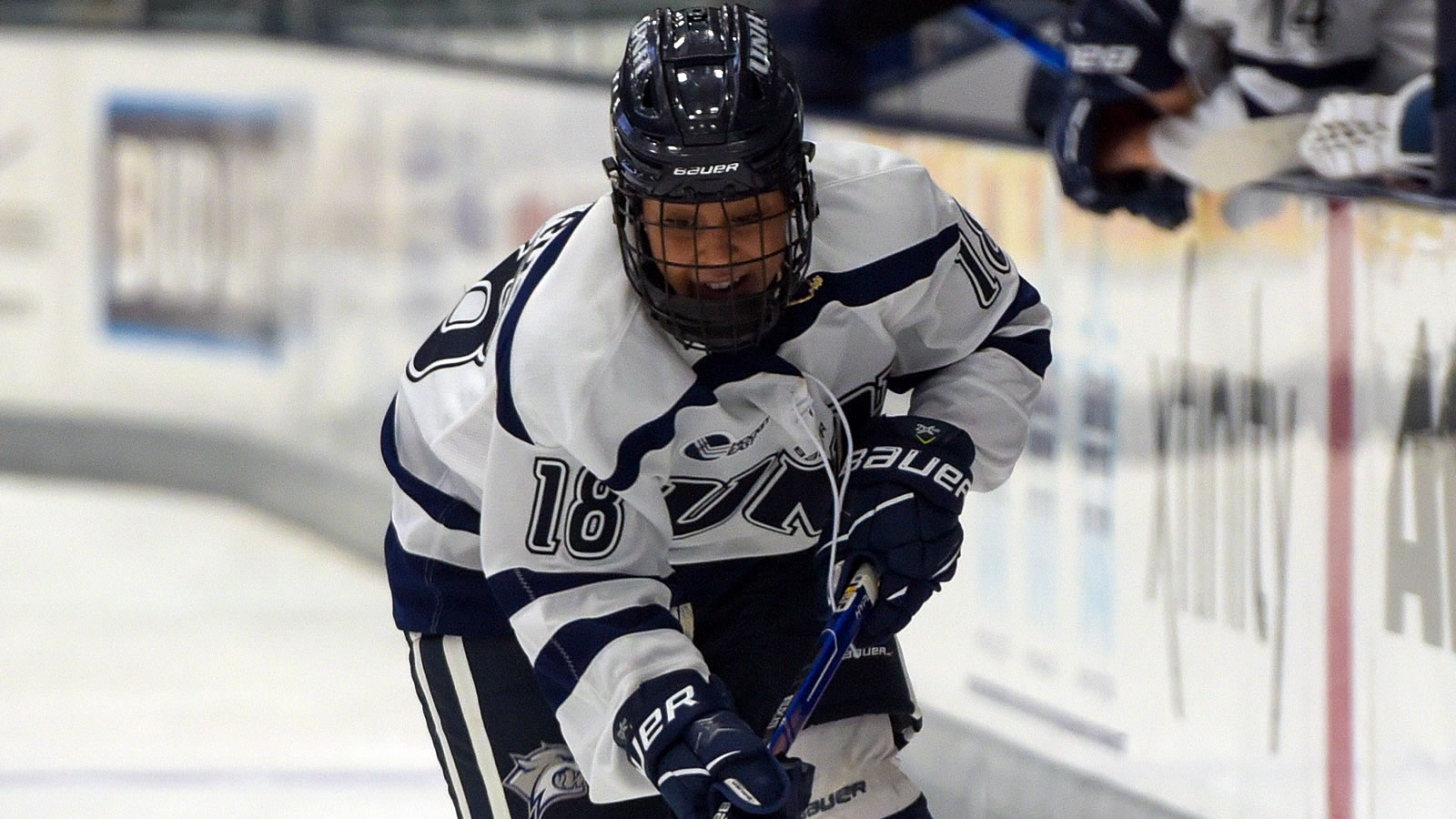 FPU goalie Suzette Faucher finished with 38 saves and Jenna Ruiz netted a pair of third-period goals to rally the Ravens from a 3-1 deficit.

- UNH's Kacey Bellamy Day is Nov. 13 (2 p.m.) vs. Merrimack. The UNH alum and three-time Olympian will be in attendance at the Whittemore Center. Fans will have the opportunity to meet Bellamy during the first intermission autograph signing.

- UNH pressured in the opening minute but Faucher set the tone for the game by denying both senior Paige Rynne (Ancaster, Ontario) and reigning Hockey East Rookie of the Month Kira Juodikis (LaSalle, Ontario).

- The Ravens went on the power play at 4:42, but it was the Wildcats who were quick to strike and take a 1-0 lead. Sophomore Brianna Brooks (Whitby, Ontario) won the defensive zone faceoff and Thiérus chipped the puck off the boards to the neutral zone. She advanced into the right circle and, while fending off an FPU skater, pushed a shot on goal. Faucher made the save, but Thiérus followed the rebound and jammed the puck inside the post at 4:54.

- In the closing minute, Thewes stopped the initial shot by Ruiz, but Brooke Remington scored from the scrum in front of the net to tie the score, 1-1, with 23 seconds on the clock.

- New Hampshire recorded an 11-4 shot advantage in the second stanza and built a 3-1 lead.

- The 'Cats regained the lead at 11:03 when Truter snapped a rising wrister from the slot into the cage. Sophomore Kyla Bent (Halifax, Nova Scotia), who stole the puck in the left circle and left if there for Truter, was credited with the assist.

- UNH continued to pressure but Faucher turned aside all three Wildcat shots in the next three minutes.

- Thewes then faced a flurry of three shots in 20 seconds, but she stopped the attempts by Cassidy Jones and Geno Hendrickson - twice-to preserve UNH's one-goal advantage.

- Kelly extended UNH's lead to 3-1 at 15:21. Senior captain Lauren Martin (Cambridge, Ontario) initiated the scoring sequence when she pokechecked the puck from the left circle toward the slot. Kelly skated onto the loose puck and deked at the top of the crease before depositing a shot inside the right post.

- Franklin Pierce netted a pair of early goals to tie the score and the Ravens recorded a 10-8 shot advantage in the final frame.

- Thewes stopped the first three shots in a span of seven seconds, but Ruiz shoved the puck in at the right post to lift the home team within 3-2 at 1:20.

- UNH outshot the Ravens 4-2 the remainder of regulation.

- New Hampshire controlled possession a majority of the five-minute extra session to produce an 11-1 shot advantage in OT.

- Brooks had another dangerous chance with one minute elapsed.

- Senior defenseman and captain Maddie Truax (Gardner, Mass.) ripped a wrist shot from the slot that beat Faucher but caromed off the crossbar at 1:41.

- With 1:30 to play, Faucher turned aside Truax's initial shot as well as the one off the rebound by junior Annie Berry (Milton, Mass.).

- UNH sustained pressure in the zone but Faucher stopped one shot by sophomore Brianna Legros (New Liskeard, Ontario) and two more by Brooks.

- Rynne led a 2-on-1 rush down the right wing in the closing seconds, but she was tripped and Faucher made the save.

- Brooks won the ensuing faceoff to Fausher's right, and Rickwood sent a shot wide of the net as time expired.

- New Hampshire finished the game with a 41-22 shot advantage.

- Truax, who entered the weekend as the national leader in blocks, blocked a team-high two shots.

- Thiérus extended her point streak to six games with the shorthanded goal. She has 10 points (four goals, six assists) during the streak, and those 10 points are a team high.

- Her assist streak ended at five games, as did the point streak for Juodikis.

- Brooks also extended her point streak to six games with the assist on Thiérus shorthanded tally.

- Brooks ranks second on the team in assists (five) and third in points (eight); all eight points have come during the point streak.

- It was the first goal and point of the season for both Truter and Kelly.

- It was the first assist and point of the season for both Bent and Martin.

- UNH has scored two shorthanded goals this season. The other was by Berry at Providence College on Oct. 8.

- This was the first start of the season for Thewes, who previously had a 55-second relief stint Oct. 2 at Boston University.

- The Wildcats have scored eight goals during the three-game unbeaten streak; they netted nine goals in the opening six games.

- UNH has a 1-0-1 lifetime record against Franklin Pierce.