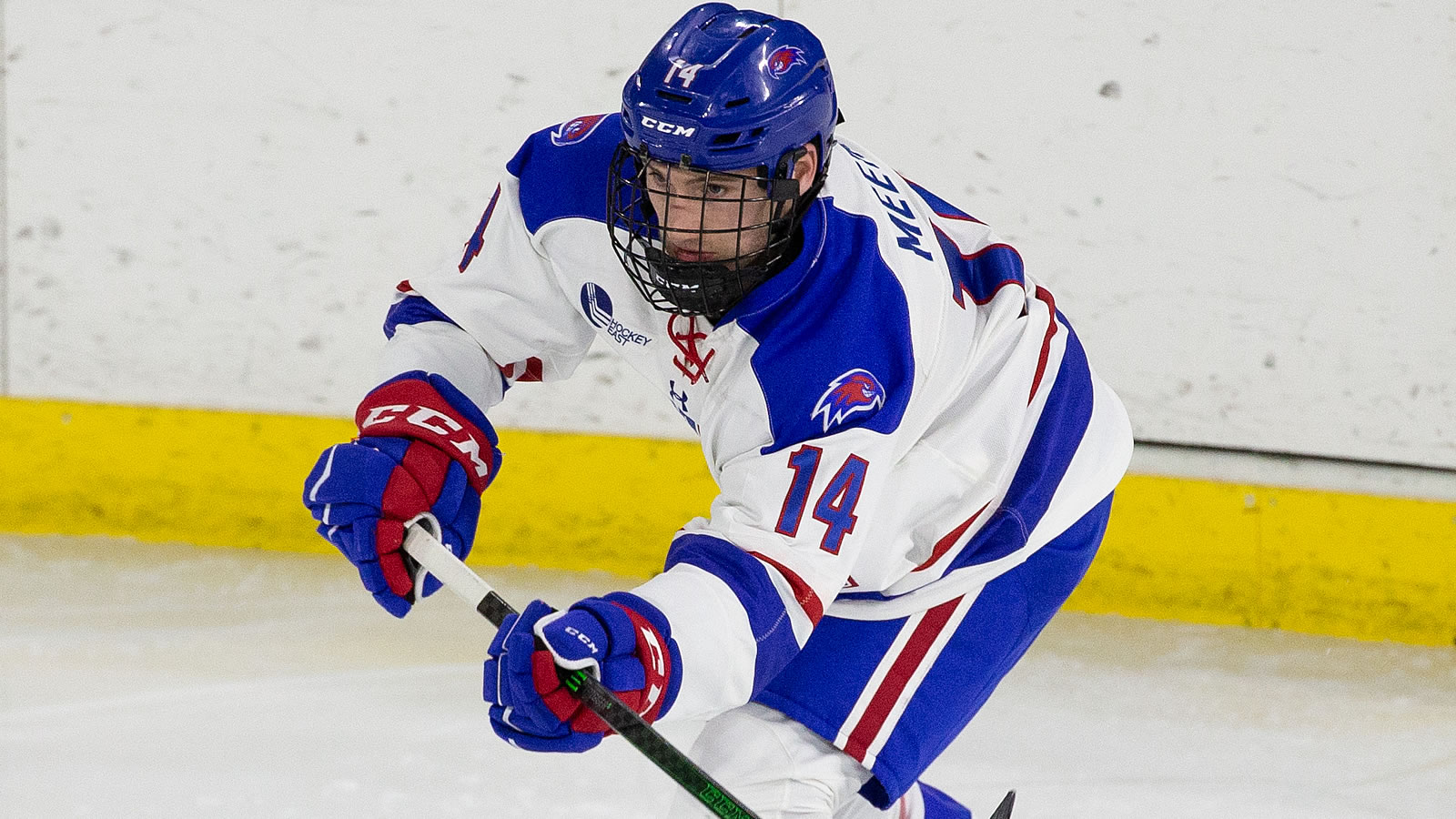 With tonight's win, the River Hawks shattered the Huskies' five-game winning streak to move to 5-1-9 in their last 15 overtime contests and remain undefeated in conference action.

"Overall, we're very pleased. I thought we started off a little sluggish. Maybe it's the nine days off. We got a little better as the game went on, and we were able to capitalize on the power play there," said Head Coach Norm Bazin.

Meehan finished the night with a team-high two points off his game-winning goal and an assist. The sophomore blueliner now leads the River Hawks defense in scoring with four points off two goals and two assists. Joining Meehan in the scoring column, senior Lucas Condotta (Georgetown, Ontario) notched his second power play goal of the season to tie the game with just over five minutes left in regulation.

Between the pipes, senior Owen Savory (Cambridge, Ontario) continued his impressive start to the season, stopping 16 shots and allowing just one goal to keep the River Hawks in the win column.

"At the end of the day, we put out four trios. The four scored. But, all four units created some tempo and had some good puck possession. I'm happy with that element," remarked Bazin.

The first frame marked a heavily defensive 20 minutes for the River Hawks. Led by Savory, UMass Lowell fought off a high-pressure Huskies offense, successfully stopping all six shot attempts. Despite a late period press by the River Hawks that resulted in eight shots on goal, neither team was able to break through the blueline as the first intermission approached.

The Huskies struck first in the highly contested conference battle, scoring on the power play at 13:49 in the second period. Less than a minute later, a loose puck in the neutral zone gave Condotta nothing but open ice as he charged towards the Huskies net. Tripped up at the last second, the River Hawks were awarded a penalty shot with 6:31 left in the period. Condotta tried to outsmart Northeastern's Devon Levi but was swatted away, sending the River Hawks to the locker room down 1-0 heading into the third.

After controlling possession for most of the match, the River Hawks unrelenting offense finally broke through the Huskies backline with just over five minutes left to play. With Northeastern heading to the box, the River Hawks went to the extra-man opportunity. Off the first faceoff in the power play, senior Jon McDonald (Livonia, Mich.) controlled the draw and sent the pass across to Meehan, who fired it towards the net. Set in front of the net, Condotta tipped the puck over the shoulder of Levi to send the teams to a bonus frame.

The Huskies earned an early opportunity on the 3-on-3 as Aidan McDonough barreled down the ice on the breakaway. A broken stick and strong backchecking by junior Carl Berglund (Hammaro, Sweden) kept the puck in play as Berglund launched the puck towards the Huskies' defensive zone. Setting up the play, junior Zach Kaiser (Orangeville, Ontario) sent a quick feed to Meehan, who one-timed the puck over the glove of Levi to earn the 2-1 win.

The River Hawks return to the Tsongas Center tomorrow night to face off a new opponent in No. 16 Boston College. Puck drop is set for 6 p.m.