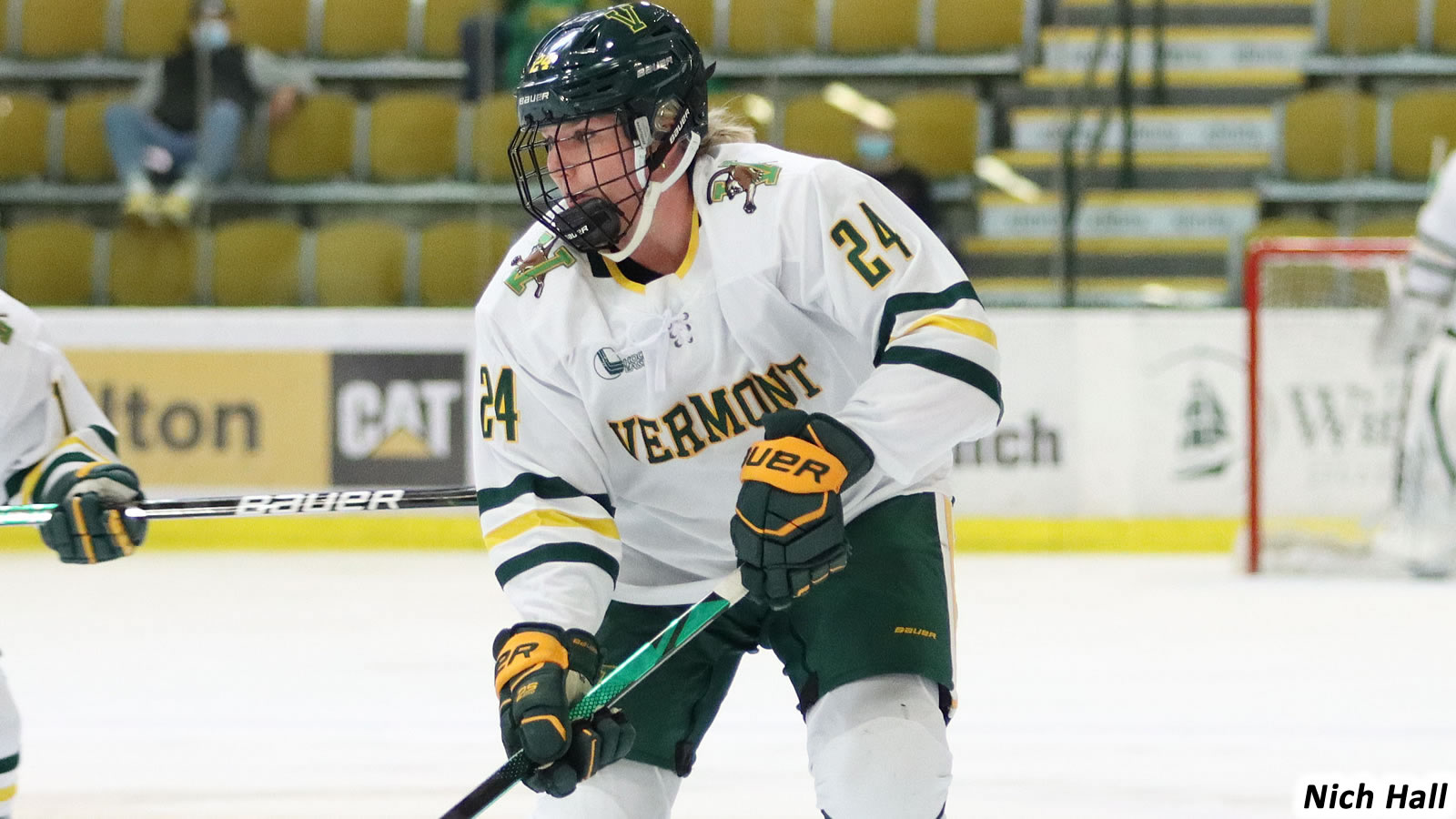 BURLINGTON, Vt. - Five different Catamounts found the back of the net Saturday night as Vermont used a three-goal second period to pull away from Syracuse in a 5-1 win Saturday night at Gutterson Fieldhouse. With the win Vermont improved to 7-6-2 on the season while the Orange fell to 5-7-3.

"Honestly, the score didn't reflect the flow of the play but this was a day when the pucks were going in for us," Head Coach Jim Plumer said. "I'm very pleased that we were able to close out this win and it was a successful weekend against a very good Syracuse team. Jessie McPherson was outstanding in net and we got excellent goaltending this weekend as Blanka Škodová was excellent last night as well. I am excited for us to close out the semester with three very important Hockey East games."

- Vermont's Jessie McPherson was sharp early for the Catamounts. On Vermont's first power play of the contest she robbed Syracuse's Shelby Calof on a breakaway and made another stop on a partial breakaway to keep the game scoreless.

- The Orange's Abby Moloughney and Theresha Schafzahl hit the post within 45 seconds of each other late in the first period before Kristina Shanahan opened the scoring. With 1:27 left in the opening frame Alyssa Holmes fed a perfect pass to Shanahan in front of the Cuse net and Shanahan tapped it home for her fifth goal of the season.

- Schafzahl doubled the Vermont advantage early in the second period just after coming out of the penalty box. Lilly Holmes sprung her out of the box and Schafzahl made two quick moves from her left to her right before tucking the puck past Syracuse's Allison Small for her fourth of the year 3:24 in the middle period.

- Lily Humphrey made it a three-goal lead with her second of the season on the power play. Cutting down the middle Corrine McCool spotted her down low at the side of the net. Humphrey redirected McCool's pass on net and a diving Small made the initial save but Humphrey tapped home the rebound.

- Syracuse pulled the momentum back in its favor with a shorthanded tally with 32 seconds left in the second period as Rayla Clemons converted in transition for the Orange. The momentum was short lived though. McCool converted on the power play with four seconds left in the period to regain UVM's three-goal cushion. In transition McCool skated to her right and fired a perfect low shot to her left for her third of the season.

- After a tight defensive third from the Catamounts Evelyne Blais-Savoie closed out the scoring with a wonderful individual effort in the final minute of regulation. Blais-Savoie knocked down a clearance attempt in the Cuse zone and skated into the slot before wiring a shot of the post and in for her second of the year with just 21 seconds remaining.

- The Catamounts won 58.7 percent of the draws Saturday. Alyssa Holmes led the way for UVM with 10 wins.

- In her four games since returning from Olympic qualifying Theresa Schafzahl has three goals and six assists for nine points.

The Catamounts hit the road next weekend in Hockey East play as they travel to the Whittemore Center to face New Hampshire in a two-game series. The teams will faceoff at 6 p.m. on Friday, December 3 and then again on Saturday at 2 p.m. Both games will air for free on CollegeSportsLive.