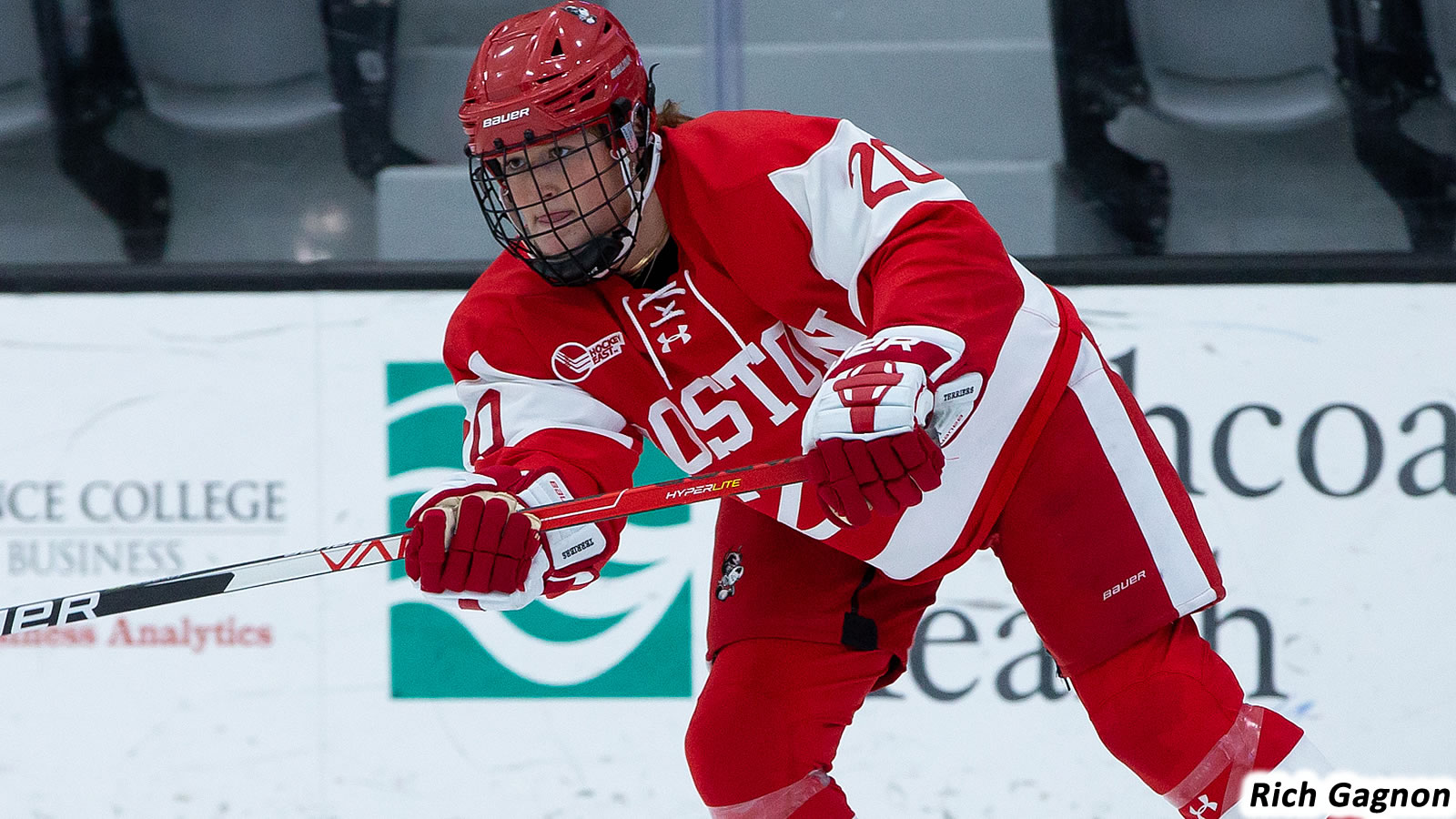 Merrimack broke a scoreless tie 4:14 into the third period before Correia forced overtime. Freshman Callie Shanahan turned in a 31-save performance, including a stop on a penalty shot in the second period.

- Goals were at a premium all contest as the teams went back and forth for the first two periods without a goal.

- BU got an early power play two minutes into the game and put three shots on goal during the advantage but couldn't get one past Merrimack netminder Emma Gorksi.

- Soon after getting back to full strength, Merrimack controlled the play for an extended period of time and tested Shanahan but the freshman kept the Warriors off the board.

- Shanahan got help later in the opening period when a Merrimack shot glazed off the pipe and redirected to the far corner.

- The Terriers were presented with a great opportunity to break the deadlock as they drew another Merrimack penalty as the first period expired to get a power play on a fresh sheet to start the second and then earned another power play just 12 seconds after the first one expired.

- Neither chance was successful, however, and the Terriers' penalty kill had to make their debut quickly after.

- Back-to-back BU penalties took place and the latter resulted in a penalty shot at the 3:31 mark.

- Shanahan turned aside the try by Ally Qualley with her left pad to keep it a 0-0 contest.

- BU was shorthanded late in the second and once again got back to full strength successfully.

- A goal finally came in the early stages of the third as Merrimack's Hannah Corneliusen scored in tight off assists from Emily Oosterveld and Julia MacLean at 4:14.

- The teams traded penalties midway through the third, resulting in 4-on-4 play for the second time in the game.

- The Terriers would get their equalizer skating 5-on-5 as graduate student Ellie Larson won a puck behind the Merrimack goal and got it to Correia, who backhanded it in at the left post to make it 1-1 with 3:59 left in regulation.

- With just 59 seconds left in regulation, the momentum quickly shifted in BU's favor when Merrimack's Dominika Laskova was issued a major and game misconduct for hitting from behind, giving the Terriers an advantage for the remainder of the third and the vast majority of overtime.

- BU would need only 41 seconds in the extra session to produce the winner.

- The Terriers cycled the puck before junior Nadia Mattivi took a one-timer from the center point that was stopped but she got it back off a pass from Correia and then set up Shaunessy for a decisive one-timer from the left circle.

- Shanahan's 31 saves were one off her season high that she set in BU's previous game, a 5-4 win over Boston College on Nov. 21.

- Each team had 13 blocked shots and four Terriers had two apiece.

- The two teams will meet again on Saturday (Dec. 4) for the back end of the home-and-home series at Walter Brown Arena.