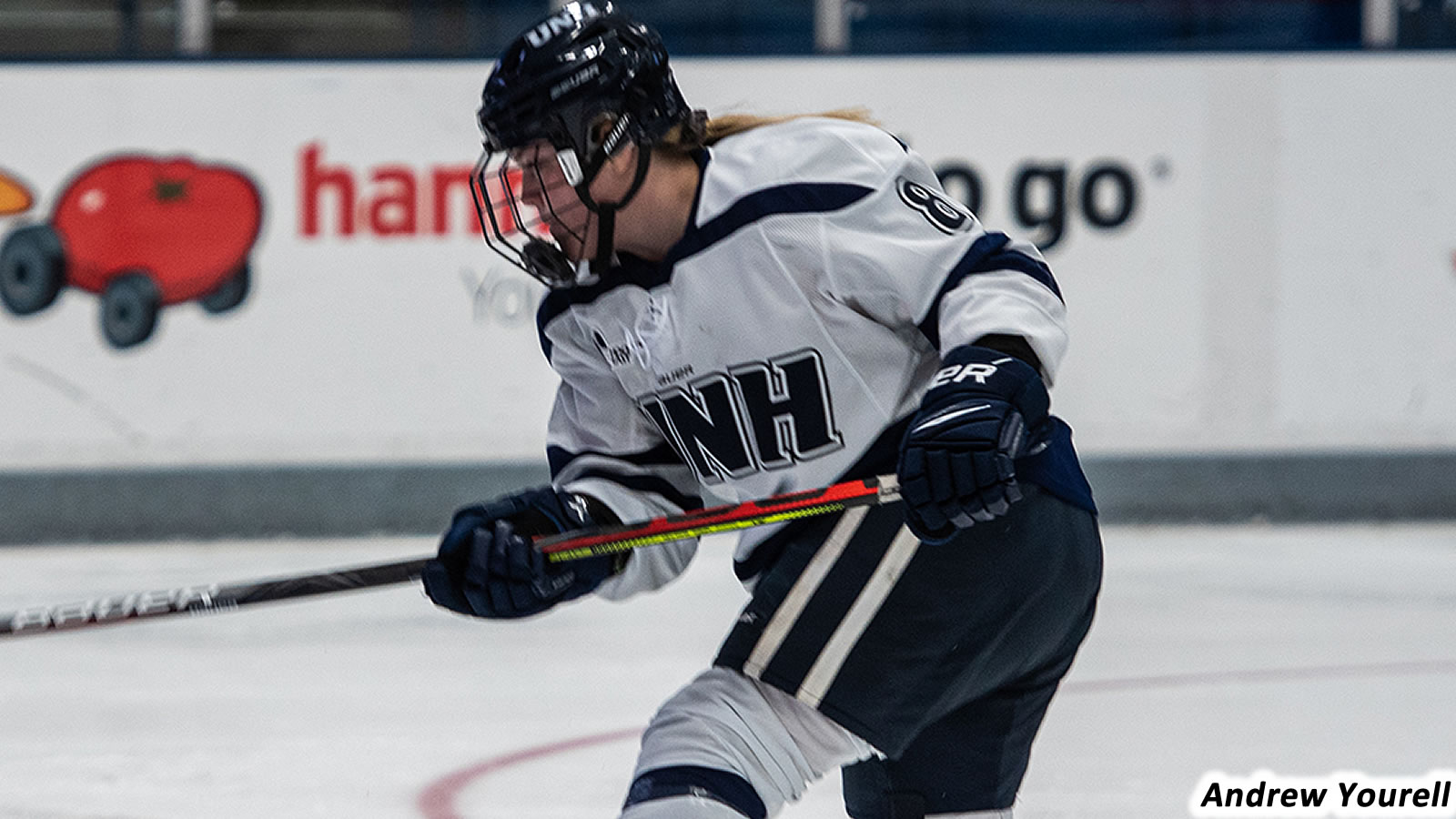 Kelly finished with two goals and an assist to match her career high in goals and establish a personal best in points. Christian tallied three assists to record her first career multiple-assist game and a personal-best three points.

Senior goalie and captain Ava Boutilier (Charlottetown, Prince Edward Island) saved 25 of 27 shots on goal with 11 stops in the third period. Vermont counterpart Jessie McPherson was credited with 18 saves, including 11 in the first period.

New Hampshire returns to action Dec. 4 (2 p.m.) at home for the two-game series finale against UVM.

- The Wildcats' recorded a 12-7 shot advantage as the teams skated to a 1-1 tie through the first 20 minutes of play.

- Vermont converted an early power play into a 1-0 lead on Theresa Schafzahl's goal at 8:22.

- UNH responded with a goal to tie the game at 17:39. After applying pressure on the goalie from Christian and Legros, Kelly fired a shot deep on the right wing off the crossbar into the back of the net to make it 1-1.

- Vermont recorded a 9-7 shot advantage although UNH outscored the Catamounts 2-1 in the middle stanza.

- The Wildcats netted the first goal of the second period at 4:02. From the left circle, Kelly made a diagonal pass to Berry for the Wildcats' second goal of the game and 2-1 lead. Christian, who advanced the puck to Kelly, was also credited with an assist.

- UNH took the lead 2 minutes, 21 seconds later. Brooks had a beautiful pass to Kelly on the left side and she deked McPherson at the doorstep to put the Wildcats up 3-2 at 10:31. Christian, with the outlet pass through the neutral zone, earned the secondary assist.

- Vermont recorded a shot advantage of 11-4 but UNH netted the only two goals of the final frame.

- The Wildcats tallied their fourth goal at 10:40. A shot by junior Rae Breton (Brighton, Ontario) from the high slot bounced off the end boards to the other side of the net, where Brooks finish off the goal with a backhander into the open left side of the net to put UNH up 4-2.

- UNH put the Catamounts away with an empty-net goal with 37.6 seconds remaining. Legros corralled a loose puck at the blue line and shot the puck through the neutral zone into the open cage.

- Vermont finished with a 27-23 shot advantage.

- Vermont had the edge on faceoffs, winning 28-17 in the faceoff circle.

- Senior captain Maddie Truax (Gardner, Mass.), who entered the game atop the Hockey East leaderboard in blocks, led all skaters with five blocks.

- Brooks recorded a goal and an assist for the third consecutive game to extend her goal, assist and point streaks all to three games.

- Brooks has five multiple-point games this season and six career.

- Brooks leads the team in both assists (nine) and points (15) this season.

- Christian recorded her second multiple-point game of the season and fourth career.

- She has three career multiple-goal efforts (first this season).

- Legros scored her first career goal with the empty-net tally. She also recorded her second career multiple-point game (both in the past three games).

- Christian finished with a +5 rating and Kelly was at +4. Breton, Brooks and Kettyle were all +3.

- The Wildcats have won two straight in the series for the first time since the 2014-15 season.