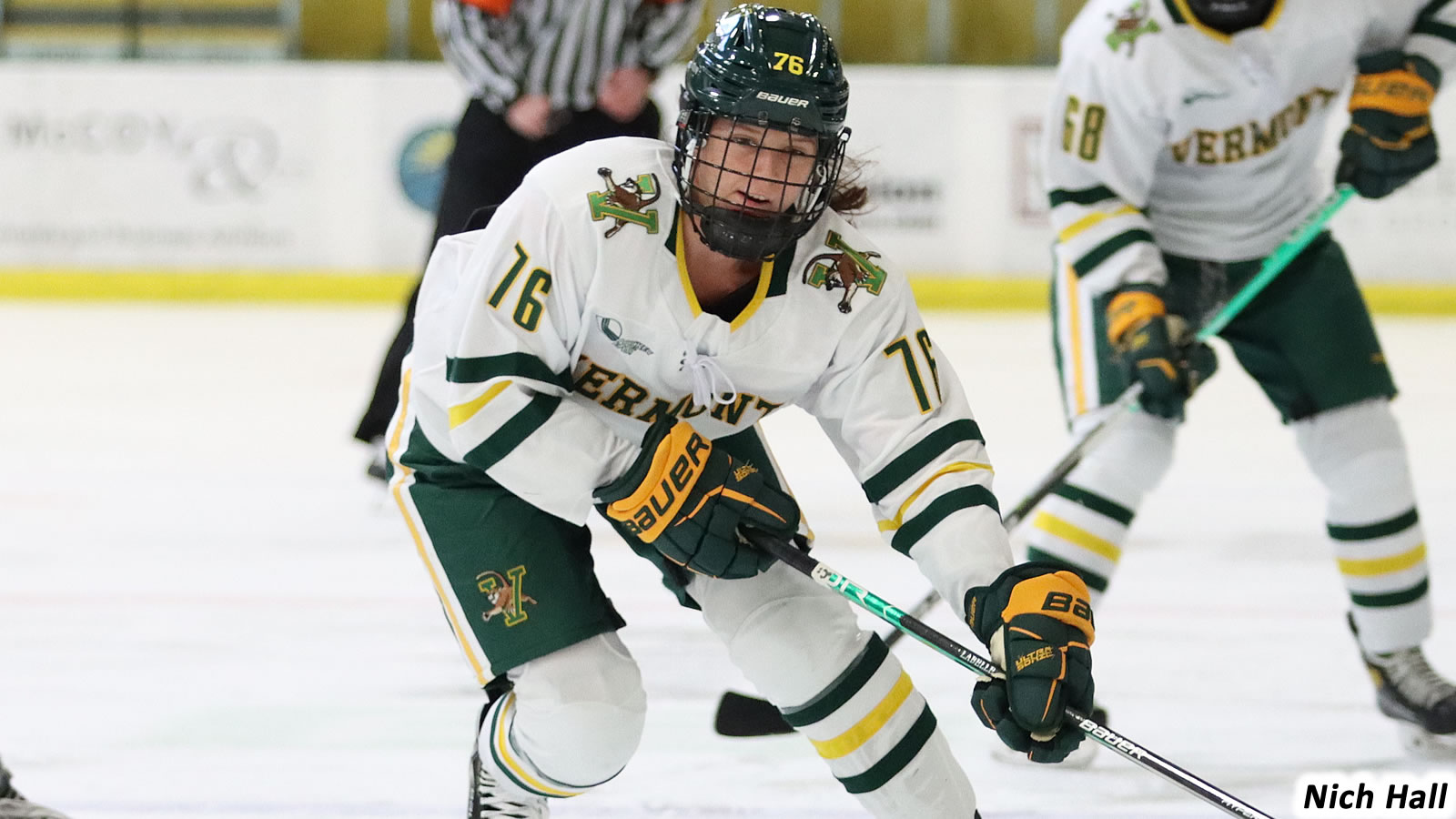 DURHAM, N.H. - Kristina Shanahan scored twice and she was one of five Catamounts to find the scoresheet as they defeated UNH 6-3 Saturday afternoon in Hockey East action from the Whittemore Center. With the win Vermont improved to 8-7-2 on the season while the Wildcats fell to 6-9-2.

"Great bounce back win for us today against a tough UNH team," Head Coach Jim Plumer said. "I'm so proud of this team for their heart and their resilience as we continue to learn how to win consistently. We played excellent hockey at both ends of the ice and got timely scoring and it's a recipe for success. We are looking forward to our last game of the semester and going into the break with momentum."

- Shanahan opened the scoring for the Catamounts with 7:10 left in the first period on UVM's first power play opportunity of the contest. On a passing play Bella Parento fed over to Hailey Burns in the faceoff circle and she quickly got a feed to Shanahan alone in the slot and she one-timed it home for her sixth goal of the season.

- The Wildcats equalized with 2:40 left in the opening frame. In alone on UVM's Blanka Škodová Kira Juodikis slipped a shot just under Škodová's arm that trickled into the net. Initially it was ruled no goal as the officials blew the play dead, but upon review Juodikis' eighth goal of the season was allowed.

- UVM regained its lead 4:33 into the second period. On a mad scramble in front of UNH's net with nine players at or in the crease Maude Poulin-Labelle stashed it home for sixth of the season.

- Just 26 seconds later New Hampshire's Juodikis tied it back up at two. She collected a rebound and squeaked a shot past Škodová at the far post.

- In transition Lily Humphrey reestablished the UVM lead with 6:43 left in the second period. Humphrey fired a high snap shot that was stopped by UNH's Ava Boutilier but Humphrey followed her shot and tucked the rebound home for her third goal of the campaign.

- 57 seconds later UVM doubled its advantage. Poulin-Labelle pinched down from the blue line and forced a turnover along the boards, she gathered the puck and found Maddy Skelton alone in the slot. She fired a shot off the post and in for her first goal of the season.

- UNH's Nicole Kelly cut the lead back to one 9:06 into the third period. Charli Kettyle fired a shot in transition that was blocked by a UVM forward but it came right to Kelly who beat Škodová with a quick shot before she could reset.

- Schafzahl reestablished the two-goal cushion 77 seconds later for the Catamounts. After a series of difficult saves by Boutilier Poulin-Labelle found Schafzahl alone in the slot and she fired a perfect shot just under the post to make it 5-3. Sini Karjalainen earned the secondary assist on the play.

- Shanahan sealed the win with an empty net tally with 1:25 left in the contest. Alyssa Holmes and Alex Gray earned assists on Shanahan's second of the game.

- In her six games since returning from Olympic qualifying Theresa Schafzahl has six goals and seven assists for 13 points. Over that same six-game stretch Maude Poulin-Labelle has four goals and eight assists for 12 points.

- Vermont won 56.8% of the draws Saturday - Hailey Burns, Alyssa Holmes and Theresa Schafzahl all won 64% or better of the faceoffs they took.

- In its last six games Vermont has scored 24 goals, an average of four goals per game.

The Catamounts return to action on Friday, December 10 for its final contest of the semester. Vermont will host Boston College in their first meeting of the season at 2 p.m. The game will be broadcast for free on CollegeSportsLive. During the game on Friday we will be collecting diapers for the 2021 Dee PT Great Diaper Dump in support of VT Kids. Please consider donating diapers to help local families.