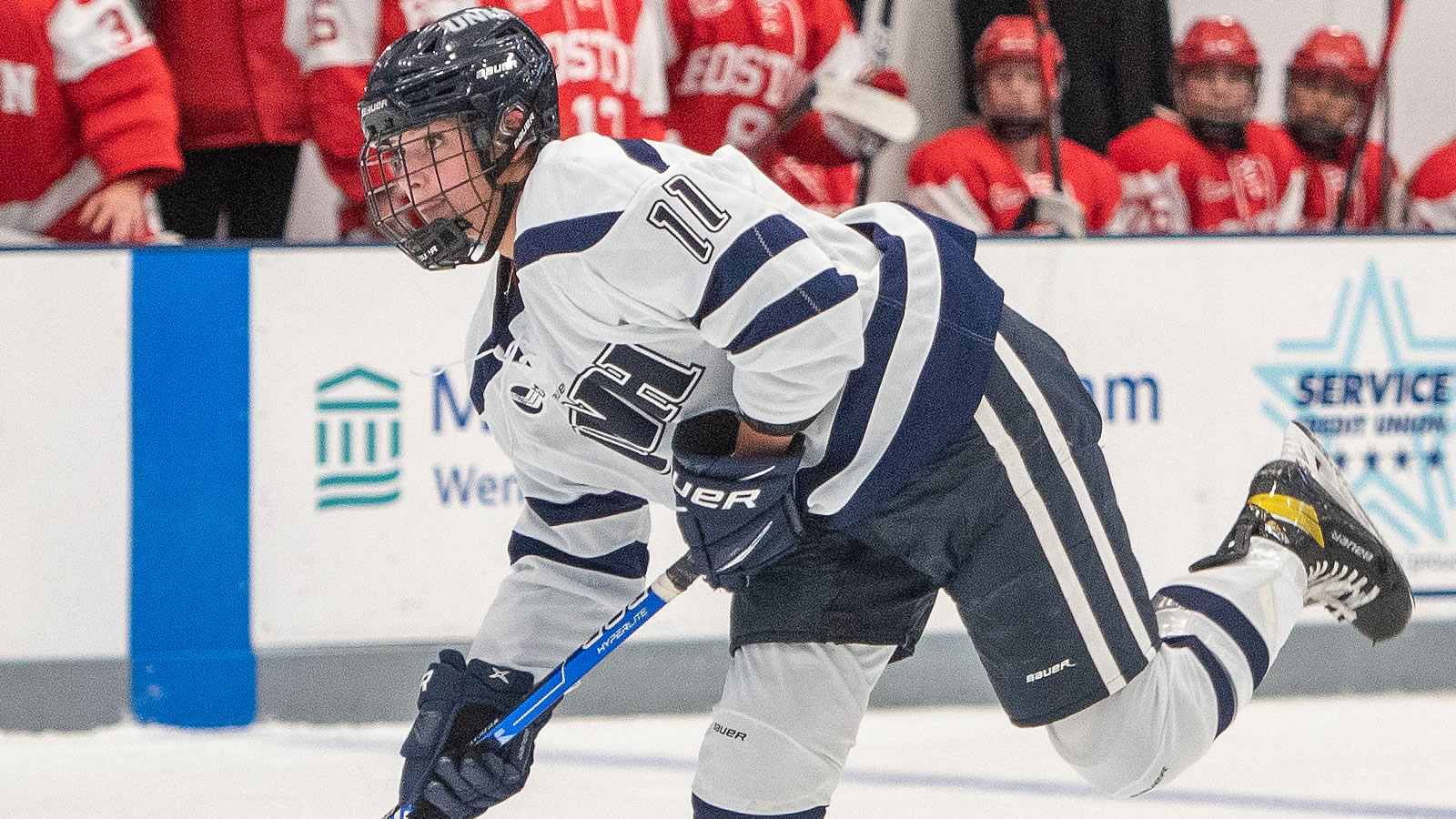 HANOVER, N.H. - Sophomore Chavonne Truter (Uxbridge, Ontario) scored a pair of third-period goals to erase a two-goal deficit, but the University of New Hampshire women's hockey team was upended 4-3 in overtime by Dartmouth College at Thompson Arena on Sunday afternoon.

CC Bowlby scored the game-winning goal at 3:43 of OT and also tallied an assist to finish as the only Big Green skater with multiple points.

- UNH returns to action for a two-game home series against Providence College on Jan. 7-8. Friday's start time is 2 p.m. and Saturday's game time is 3 p.m.

- Dartmouth recorded a 15-7 shot advantage and outscored UNH 2-1 in the opening 20 minutes.

- Boutilier made the first save by denying Brooke Schroeder two minutes into the game.

- New Hampshire pulled even one minute later when Christian scored at 3:50. Martin was credited with the lone assist on the tally.

- Boutilier made three saves in the next two minutes to keep the score deadlocked.

- Boutilier turned aside Lauren Messier on back-to-back shots midway through the stanza.

- The home team recorded a 9-7 edge in shots and scored the only goal of the second stanza.

- In the sixth minute, the 'Cats survived a flurry of five Dartmouth shot attempts within 17 seconds on three saves by Boutilier and a pair of blocks by senior Lindsey Dumond (Hampton, N.H.).

- DC extended the advantage to 3-1 at 8:05 on an unassisted goal by Jenna Donohue.

- UNH went on the first power play of the game at 12:11, but a shot by sophomore Nicole Kelly (Brantford, Ontario) rang off the post and then Emerson stopped a shot by Martin and denied Truter off the rebound to keep the margin at two goals.

- One minute after the power play ended, the Wildcats pressured in the offensive zone with shots by sophomores Brianna Brooks (Whitby, Ontario) and Kelly that tested Emerson.

- New Hampshire went back on the power play at 16:23 but did not record a shot before being called for a tripping penalty at 17:08 to end the skater advantage.

- The Wildcats recorded a 16-10 shot advantage in the final frame to erase the two-goal deficit.

- UNH pressured early with four shots on goal in the opening two minutes.

- Boutilier made three saves within 45 seconds of the sixth minute to keep the 'Cats within a goal.

- Emerson stopped four UNH chances within a two-minute span to preserve the 3-2 lead midway through the third period.

- Dartmouth went on its second power play of the game at 12:19, but Boutilier denied both Gabby Billing and Abby Grexton to backbone a successful UNH penalty kill.

- Truter's second goal of the period tied the score, 3-3, at 17:25. Martin picked up her second assist of the day and sophomore Charli Kettyle (Perth, Ontario) was also credited with a helper.

- Boutilier made three more saves the rest of regulation to send the game into overtime.

- Dartmouth had a 5-2 shot advantage in the extra session.

- Dartmouth finished the game with a 39-32 advantage in shots on goal.

- Truter matched her career highs in both goals (two) and points (two).

- Christian scored her seventh goal of the season on the first-period tally. She finished the game with a +3 plus/minus rating.

- This marked the seventh time this season Boutilier finished with 30+ saves.

- Truter and Brooks tied for the team lead with five shots on goal.

- Prior to last year's COVID-abbreviated schedule, these programs faced off every year since the 1981-82 season