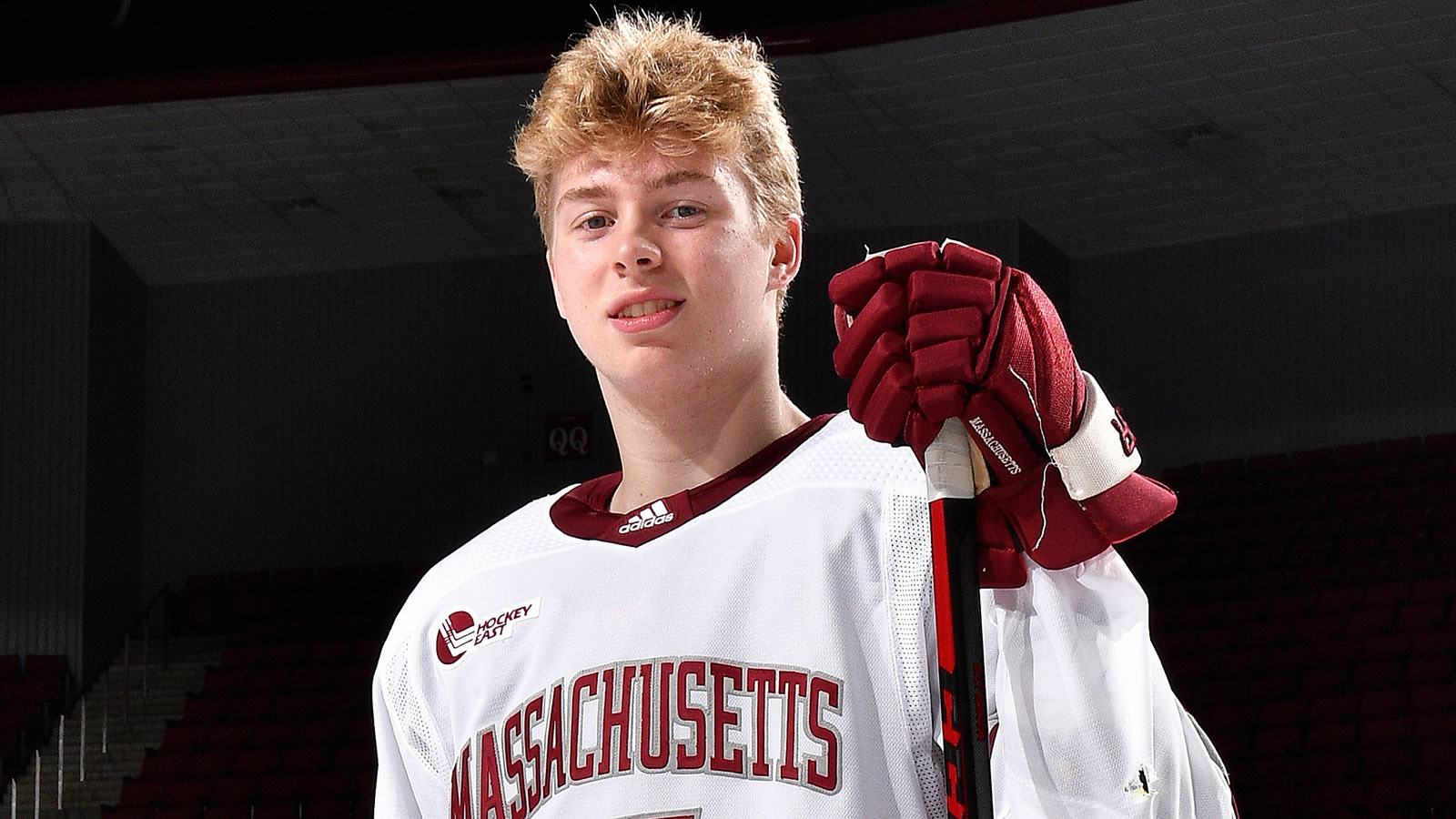 AMHERST, Mass. - No. 10/9 University of Massachusetts hockey scored twice in the third period to top Merrimack, 4-3 in non-league action at the Mullins Center on Monday night. With the win, the Minutemen improve to 10-4-2 on the season, while the Warriors fall to 7-10-1 on the year.

"We've played that team four times and it's basically been the same game four times in a row, we've had to fight from behind," said UMass head coach Greg Carvel. "I thought we played pretty well tonight considering we haven't played in a long time. I thought in the second period we were starting to take the game over and then we take two penalties and that really got them back on their feet. I give our kids a lot of credit. We came out in the third period and played really well. It's the first time I've coached a team that's come from behind so many times to win games and that's a good sign."

Freshman Scott Morrow opened the scoring at the 11:45 mark of the first period, picking up the puck from classmate Lucas Mercuri and dancing his way around several Warriors to collect his seventh tally of the season.

Merrimack tied the score at 1-1, 17:45 into the stanza. Matt Copponi and Christian Felton won battles along the wall before dishing to Logan Drevitch who drove to the net and potted the equalizer.

The Warriors then pulled in front, 2-1, at the 5:14 mark of the second period as Filip Forsmark finished off a pass from Liam Walsh in close on netminder Matt Murray.

Reed Lebster responded to level things at 2-2, 13:40 into the frame. Senior Ty Farmer skated the puck the length of the ice and into the corner with sophomore Ryan Sullivan redirecting the centering pass to Lebster's tape for the quick strike from the slot.

Before the close of the second, Merrimack went back on top, 3-2, with Max Newton converting on a 5-on-3 from Zach Vinnell and Alex Jeffries at 18:02.

Morrow netted his second of the night on a 2-on-1 from freshman Ryan Lautenbach and Farmer at 5:14 of the third period to knot the score at 3-3.

Lautenbach later added the game-winner as his shot off a feed from Morrow and Farmer redirected into the net off a Warrior's stick at the 14:56 mark.

Morrow and Farmer both finished the contest with three points apiece on two goals and an assist and three helpers, respectively, each setting career single-game highs in points. Lautenbach posted his second career multi-point game with a goal and an assist.

UMass ended the night with a 34-26 shot advantage and was 0-for-1 on the power play while the Warriors were 1-for-4.

Murray (10-4-2) totaled 23 saves for the Minutemen and Zachary Borgiel logged 30 stops for Merrimack.

UMass will be back in action on Saturday, January 8, when the squad will open its weekend series against No. 6/7 Michigan in Ann Arbor at 5 p.m.