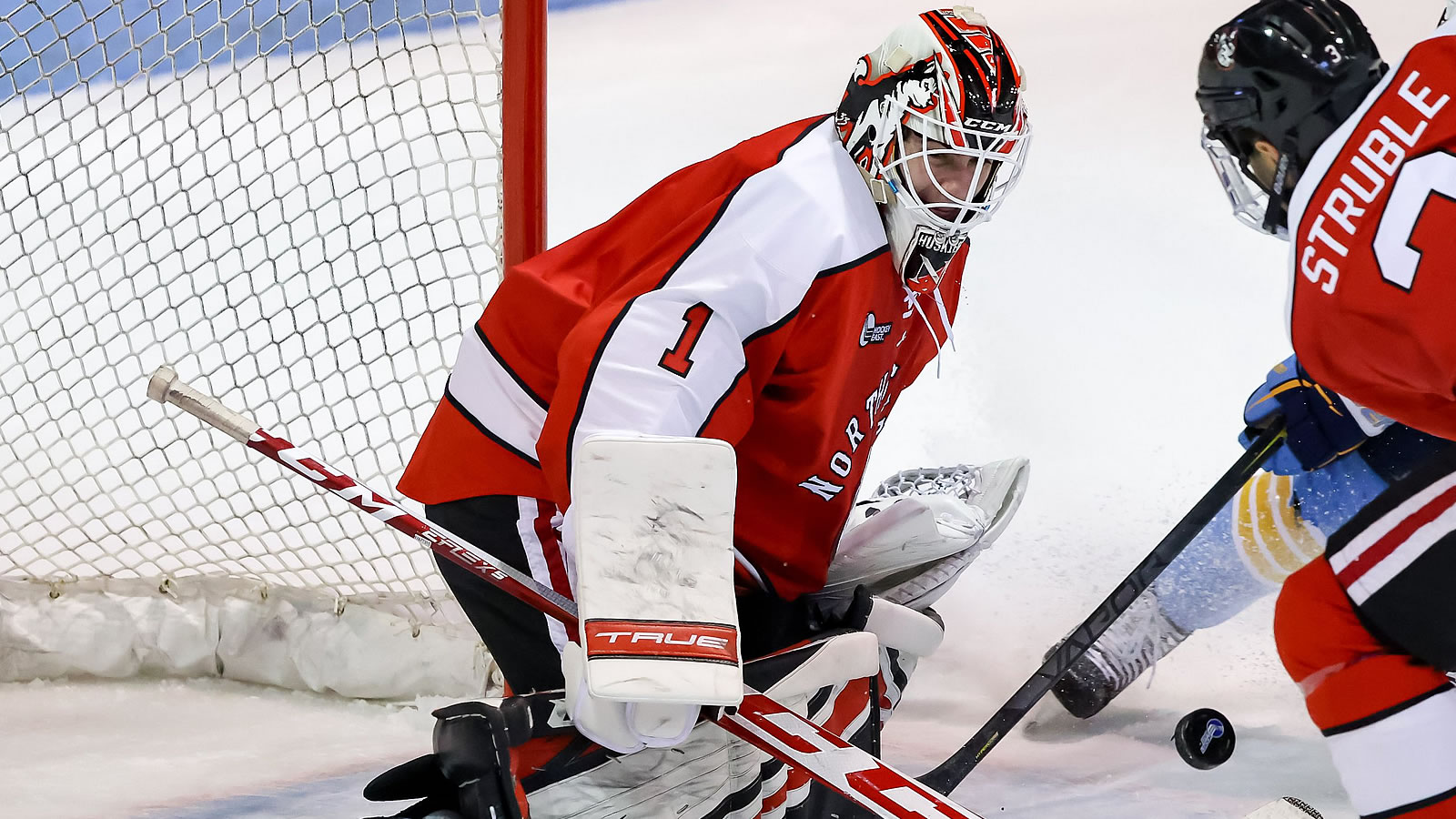 BOSTON - The no. 10/11-ranked Northeastern men's ice hockey team (15-4-1) completed a weekend sweep over Long Island University (4-14-3) with a 6-0 victory on Saturday afternoon at Matthews Arena.

The Huskies were led by sophomore winger Sam Colangelo who posted a team-high three points with the game-winning goal and two assists, while sophomore netminder Devon Levi posted his second consecutive shutout, his eighth on the year. - Colangelo (3) got the scoring started early with a power play goal 9:18 into the game; Colangelo sat to the LIU goaltender's right and put home a quick pass from Justin Hryckowian (8) from in front of the crease.

- It only took 18 seconds of game time for the Huskies to strike again as it was Jakov Novak (6) extending the lead on a rush; Riley Hughes (6) broke up a play in the neutral zone and then got the puck back after a pass from Jeremie Bucheler (6) from the Northeastern defensive zone. Hughes' initial shot was saved but Novak followed the play to poke home the rebound.

- Northeastern notched another in the first period on a similar play when Gunnarwolfe Fontaine (8) started the rush up-ice; though his shot was saved, Colangelo (3) was there for the rebound and snuck a back-hand pass to Ty Jackson (3) who found the back of the net.

- The Huskies' lone goal of the second came 9:05 into the period as Jayden Struble (4) rushed up ice and gave the puck to Matt Choupani (5) on the left side who finished a tough back-hand shot over the goalie's shoulder.

- Northeastern capped on two quick goals in the first five minutes of the final frame from junior winger Aidan McDonough (14, 15) on an accurate wrist-shot from the near-side faceoff dot 22 seconds in, and a tough-angle shot from nearly behind the goal 2:58 into the period.

- McDonough's 15 goals are good for second-best in the NCAA.

- In all, 12 separate Huskies found the score sheet in the contest.

- Devon Levi blanked the Sharks for the second straight game, stopping all 26 attempts faced. That now ties him for 8th place in the NCAA record books for shut outs in a single season. The record is 12 shutouts in a season set by Greg Gardner of Niagra in the year 2000.

A quick turnaround for Northeastern as the Huskies will host Arizona State this coming Tuesday, January 11 at Matthews Arena. Puck drop is slated for 7 p.m. on CollegeSportsLive.