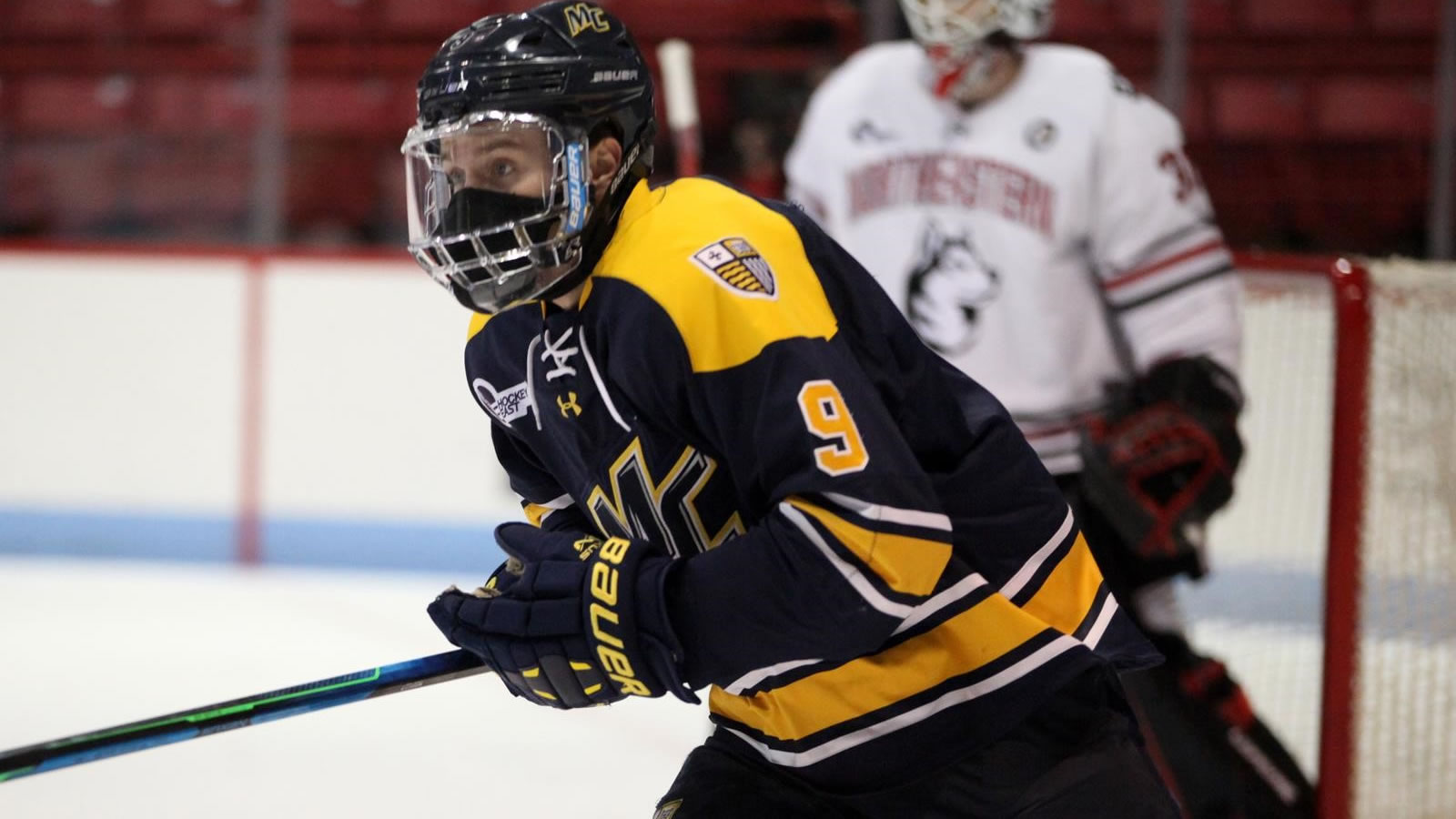 NORTH ANDOVER, Mass. - Hugo Ollas was clutch all game long, including 17 saves in the third period, to lift the Merrimack College men's hockey team to a 3-2 win over #17/RV Providence Friday night at Lawler Rink.

Ollas made a career-high 34 saves in the game to earn his fifth win of the season. Merrimack was also energized by a pair of goals from Filip Karlsson-Tagtstrom and Liam Walsh just under two minutes apart in the second period to take a lead it would not relinquish.

Declan Carlile scored what turned out to be the game-winning goal just over five minutes into the third period on a tremendous individual effort from the neutral zone. Max Newton also continued his monster campaign with a pair of assists for his sixth multi-point game of the season.

It helped the Warriors earn their fifth win of the season against a team that either is ranked or receiving votes in the national polls.

- The sides only mounted a combined 13 shots on goal in the opening stanza and seemed destined to be scoreless after 20 minutes, but the Friars scored on the power play with just four seconds to go in the frame to snare the lead heading into the first break.

- Merrimack has had its struggles this season during the second period, but that was not the story in this one. The Warriors built some chances and offensive territory, then capitalized six and a half minutes in.

- After Filip Forsmark was high sticked to create a delayed penalty, Merrimack pulled the netminder for an extra skater. Forsmark swung a feed to the right wing for Newton, who had space and fired a centering feed to Karlsson-Tagtstrom. The sophomore got a piece of it, but it trickled forward for Walsh, who had a whack, but could not finish. Karlsson-Tagtstrom swooped in and jammed the loose puck in to tie the game.

- On Merrimack's ensuing power play, Zach Uens held the point with time winding down on the man advantage. Ben Brar controlled a loose puck, cut to the middle, then swung a feed back to left of the cage for Walsh, who one-timed it home for his second point in just moments.

- Ollas held the fort on the other end of the ice and held off the Friars' high-powered power play twice in the frame to keep Merrimack in the lead after 40 minutes.

- Dueling roughing penalties sent the teams to 4-on-4 play just over five minutes into the third and it opened up the ice for Carlile to do some magic. Newton found Alex Jefferies in the neutral zone, who left the puck for a streaking Carlile. The defenseman flew around a defender and stopped in front of the net for a shot, that was stopped, then tiptoed around the Friar goalie, as he jammed it home.

- The Friars mounted their comeback effort on the Warriors and Ollas with 18 shots in the closing stanza. Providence added one with 2:36 to play, but did not get anything else, as Merrimack secured the victory.

- Newton and Carlile both led the team with +2 rating. Carlile continues to lead the Warriors in the category with a +16 rating.

- Newton and Mike Brown tied for the team-high with three blocked shots.

- Walsh now has four points in his last four games.

- Ollas has now won three straight starts and has a 2.47 goals against average and .908 save percentage on the year.

The teams complete the weekend series Saturday in Providence. Puck drop is set for 7:00 at Schneider Arena.