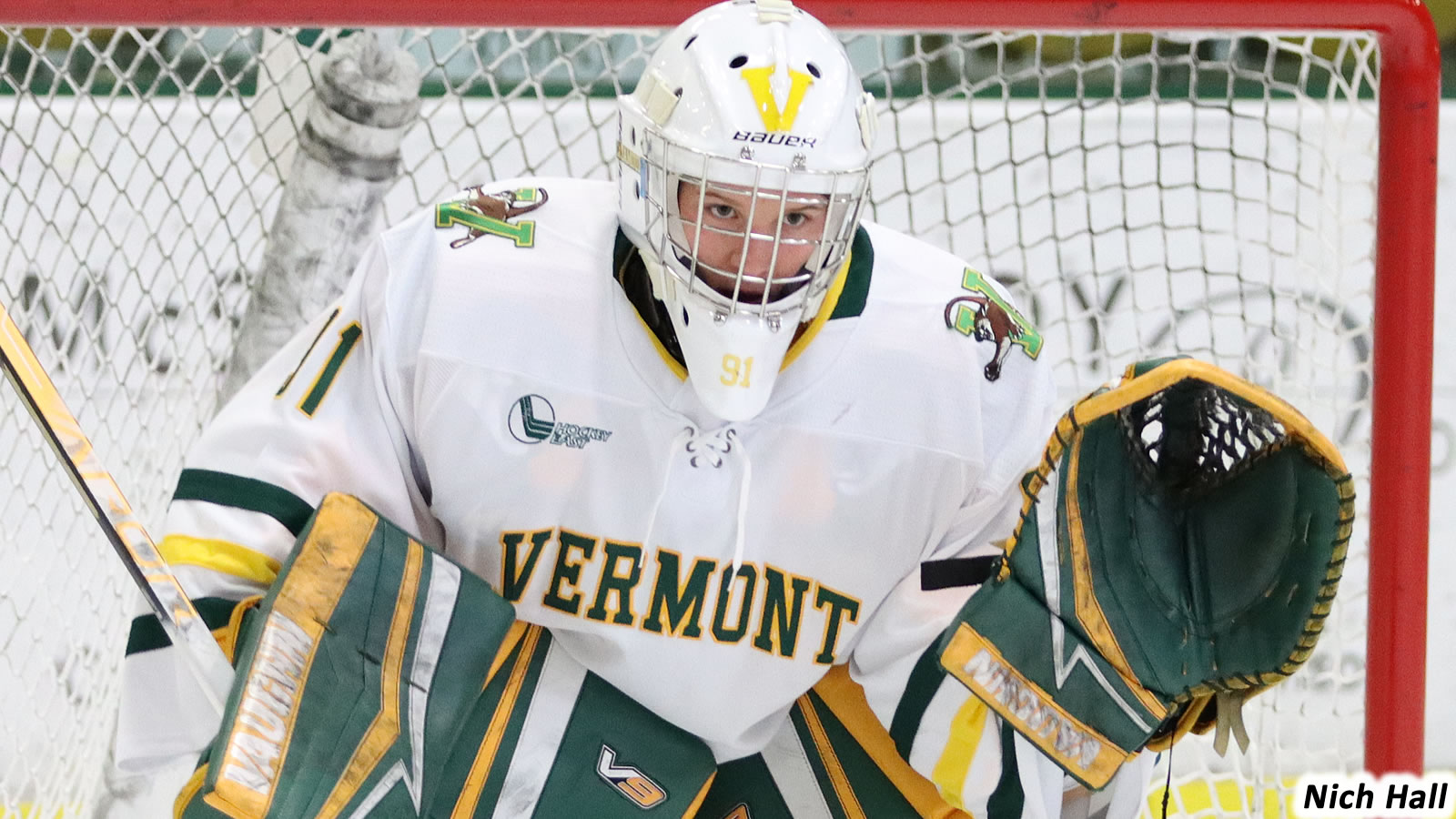 BOSTON, Mass. - Bella Parento notched her second game-winning goal of the season 6:15 into the third period as the Catamounts ended No. 1 Northeastern's 13-game winning streak Friday afternoon with a 2-1 win at Matthews Arena. Vermont's sixth straight win moved the Catamounts back into second place in Hockey East with a record of 13-6-1 and a points percentage of .667.

"Just an absolutely amazing performance by so many people today and an amazing feeling to finish this game," said Head Coach Jim Plumer. "First, Jessie McPherson was simply outstanding. Captain Shanahan got us going early and gave us the confidence to be able to play our game. And our penalty kill came through in the clutch. Northeastern is a great team and it took our absolute best effort to beat them today. Now we have to play this way through the homestretch of the season."

- For the third straight game Shanahan opened the scoring for the Catamounts with 8:01 left in the first period. Theresa Schafzahl blocked a Northeastern shot and set the Catamounts off in transition. Alyssa Holmes passed it back to Schafzahl and she fed Shanahan as she entered the Northeastern zone. Shanahan cut to the middle and rifled a shot under the bar for her 12th goal of the season.

- Midway through the second period Chloe Aurard broke in on a shorthanded breakaway for Northeastern. Aurard made three moves before trying to beat UVM's Jessie McPherson to the post with a backhand. McPherson was equal to the task and preserved UVM's lead.

- The Huskies equalized with 7:06 left in the second period. Skylar Irving knocked down a UVM clearing attempt and Maddie Mills was able to cut down the wing. She fired a shot that Maureen Murphy redirected past McPherson for her team-leading 15th goal of the season.

- Parento regained the lead for the Catamounts on their fourth power play of the game. In the corner Alyssa Holmes won a puck battle and fed a pass to Shanahan at the top of the faceoff circle. Shanahan skated into the slot and then fed a cross-ice feed to Parento. Parento placed a perfect wrist shot in the corner for her second goal of the season.

- With 3:58 to go the Huskies went to the power play for the third time in the game. The Catamounts penalty kill, ranked fifth in the NCAA, held the Huskies to just two shots. Vermont's Sara Levesque blocked three shots on the kill.

- With 37.6 seconds left in regulation McPherson made the save of the year to keep the UVM lead. In scramble mode in front of the Vermont net Katy Knoll fed a cross-ice pass to Aurard on the doorstep. She had space to shoot but a diving McPherson flashed her glove stunning Aurard and the Huskies.

- The Catamounts blocked a season-high 38 shots Friday afternoon. Sara Levesque led the way for Vermont blocking eight shots. She has blocked 13 shots for Vermont over the last two games.

The Catamounts return home on Sunday afternoon to host New Hampshire at 2 p.m. at Gutterson Fieldhouse.