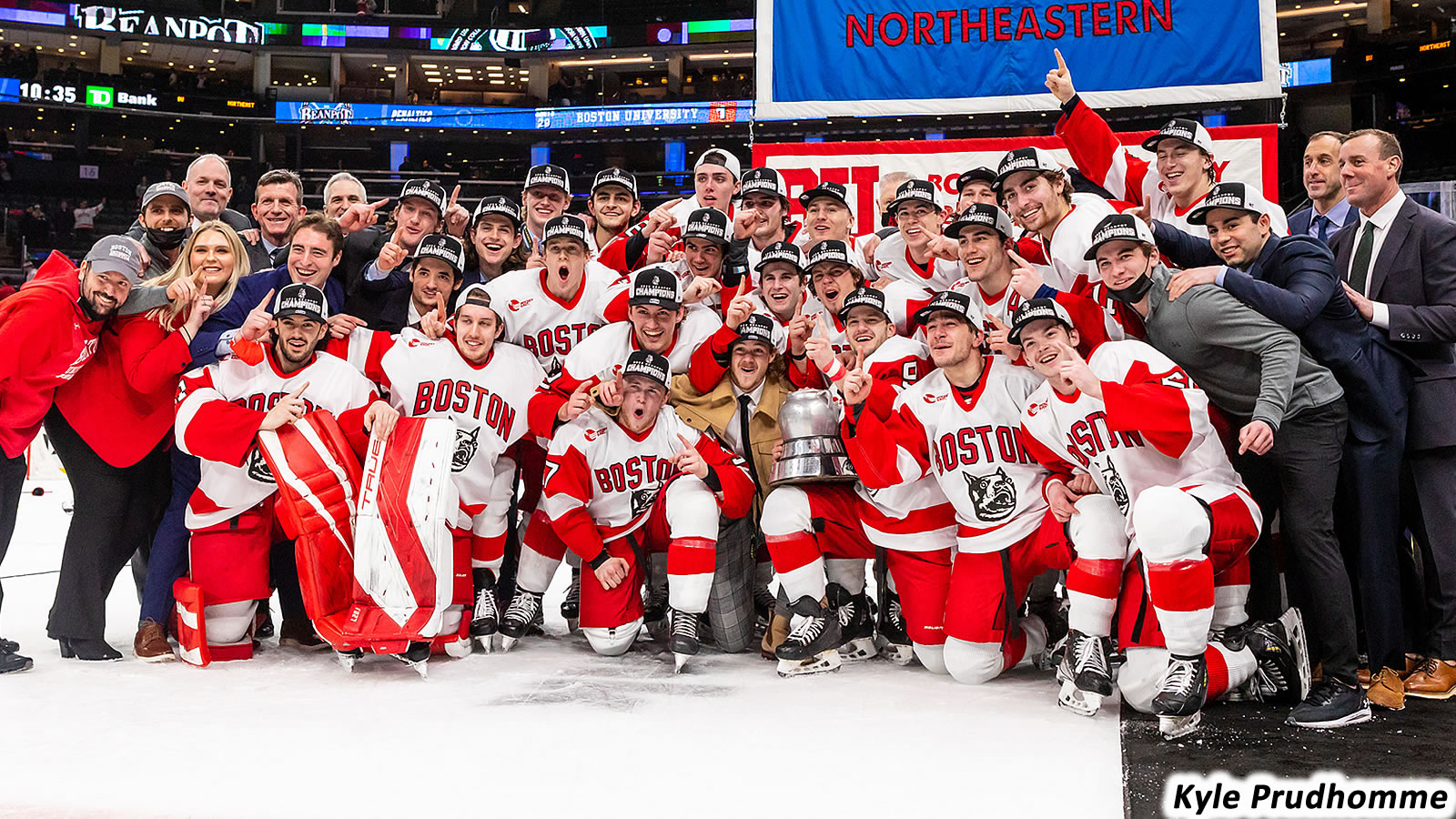 BOSTON - Sophomore Dylan Peterson scored the game's lone goal with 2:46 to play, pushing the No. 17 Boston University men's ice hockey team to a thrilling 1-0 victory over No. 13 Northeastern to win the program's 31st Beanpot title on Monday evening at TD Garden.

Sophomore Vinny Duplessis posted a 19-save shutout to help the Terriers extend their win streak to seven games and claim the Beanpot for the first time since 2015. The Terriers snapped Northeastern's run of three straight Beanpot crowns.

Peterson, the Beanpot MVP, finished off a rush at the right post following a pass by junior Jamie Armstrong to break the scoreless deadlock. Junior Domenick Fensore also assisted on the goal to push his point streak to five games.

- Duplessis made an outstanding stop early in the game when he kicked out his right pad to deny a Jakov Novak chance.

- O'Brien then came up with a critical blocked shot on what looked to be a sure Northeastern goal, as he dove to his left to get his stick on a shot that was destined for the back of the net.

- The Terriers finished the first period with a flurry of chances during 4-on-4 action, but T.J. Semptimphelter stopped a pair of bids from junior Matt Brown to send the teams to the first intermission deadlocked.

- BU began the period with an abbreviated power play but was unable to score on its only man advantage of the contest.

- Both teams continued to get strong goaltending and team defense in the second stanza, but BU controlled the play and held an 18-9 shot advantage entering the final frame.

- With 2:46 remaining in regulation, Peterson sent the Terrier faithful into a frenzy with his heroics.

- Fensore began the sequence when he knocked the puck along the left wall and out of the zone. Armstrong won the race to the puck and carried it into the NU zone, creating a 2-on-1 with Peterson. A defender went to the ground to try and block the pass, but Armstrong waited until he got to the goal line before firing a pass across the crease to Peterson for the finish.

- The Huskies pressed for an equalizer and pulled their goalie in favor of an extra attacker, but Duplessis was fantastic in those final moments to turn aside every chance he faced to seal the victory.

- The Terriers' last three Beanpot titles have all been won against Northeastern.

- BU improved to 34-11 all-time against the Huskies in the Beanpot, including a 10-5 record against them in title tilts.

- Associate head coach Jay Pandolfo and director of hockey operations Doug Friedman won their first Beanpot as a member of the coaching staff after each winning two titles as players in the 1990s.

- The Terriers last played in a Valentine's Day Beanpot final in 2005, defeating Northeastern in overtime, 3-2.

- Duplessis recorded his second shutout over his last four starts; he also blanked Maine, 4-0, on Feb. 4.

- The program's only other shutout victory in a Beanpot title game was a 4-0 win to claim the 1967 Beanpot.

- Peterson is the first Terrier since Sean Maguire in 2016 to be named Beanpot MVP and the 33rd overall Beanpot MVP from Boston University.

- Each team committed just one penalty on Monday, and both power plays lasted exactly 23 seconds.

- BU will enjoy an extended break before traveling to Chestnut Hill to begin a weekend series with Boston College on Friday, Feb. 25.