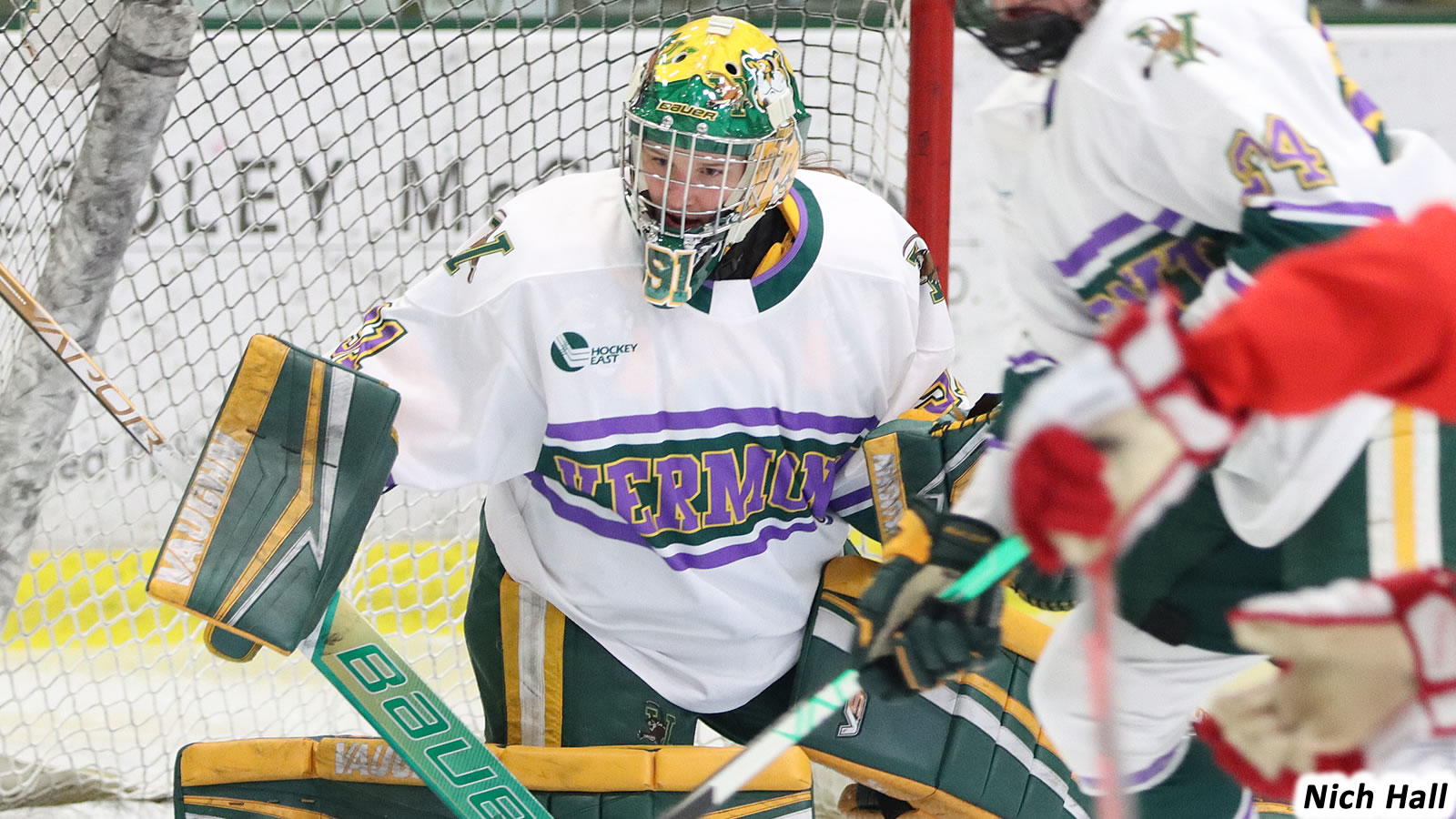 CHESTNUT HILL, Mass. - Cam Morrissey and Theresa Schafzahl scored in the shootout for the Catamounts delivering two points in the Hockey East standings and clinching the two-seed in the upcoming Hockey East Tournament. Boston College and Vermont played to a 3-3 tie through 65 minutes of game-action. Vermont improves to 17-7-2 in league play this season, the two-seed is Vermont's best-ever finish in Hockey East.

"A very hard-fought game tonight by two teams playing with playoff intensity," said Head Coach Jim Plumer. "Credit to BC for consistently coming back and not letting us be comfortable. Jessie McPherson was huge for us and we got some highlight reel goals from Shanahan, Schafzahl, and Poulin-Labelle. This team has earned everything they've gotten and it's a different era when we are able to win a season series against BC. One of our goals this season was to finish in second place and I am so proud of everyone in our program for making that a reality. It's taken a village for us to get to this point and I am excited to see how far we can go in the playoffs."

- The scoreless first period featured two of the best goalies in Hockey East. Jessie McPherson made 11 saves while her BC counterpart Abigail Levy stopped 12 attempts. With 6:37 left in the first period McPherson stopped BC's Hannah Bilka on a breakaway. Bilka went to her backhand and tried to beat McPherson through her legs but UVM's sophomore was up to the task.

- Kristina Shanahan opened the scoring for the Catamounts 2:38 into the second period. In transition Shanahan cut down the wing, faked a shot, and then deftly deked around Levy and tucked it home for her 16th goal of the season. Theresa Schafzahl earned an assist on the tally.

- Just under four minutes later Bilka equalized for the Eagles. BC's forecheck forced a turnover in the Vermont zone and Bilka took a feed at the side of the net from Olivia Finocchiaro. Bilka was able to beat McPherson with a quick backhand shot that bounced off her shoulder and in.

- Schafzahl put the Catamounts back out in front with 10:08 left in the second period. In transition and facing a one-on-one with a BC defender she pushed the puck to the middle of the ice, regathered it and ripped a shot over Levy's shoulder for her 21st goal of the season. With 21 goals, she matched Amanda Pelkey's single-season record set during the 2013-14 campaign. It was also her 40th point of the season matching Pelkey's single-season record for points from 2013-14.

- The Eagles equalized again 48 seconds into the third period. On a two-on-two down low Caroline Goffrodo was able to redirect a puck over McPherson's pad for 11th goal of the season.

- Maude Poulin-Labelle reestablished the UVM lead 5:29 into the third period. Kristina Shanahan kept a puck in at the BC blue line firing it towards the corner, the puck deflected off Alyssa Holmes and fortuitously kicked into the slot. Poulin-Labelle skated onto the puck and was able to score her 13th of the season with a low hard shot.

- Bilka struck again for the Eagles with 10:14 to go to tie things up again. Cutting down the wing with speed she labeled a shot to the top corner from a tight angle to make it 3-3.

- The teams headed to an extra session where BC's Levy put on a show. She made eight saves in the overtime period. With 22 seconds left she absolutely robbed Shanahan after she one-timed a feed from Schafzahl.

- Morrissey and Schafzahl scored for Vermont in the shootout and McPherson stopped Bilka and Alexie Guay to earn the additional point.

The Catamounts will close out the regular season tomorrow afternoon at 2 p.m. as they face Boston College once again. Saturday afternoon's contest will air live on NESN.