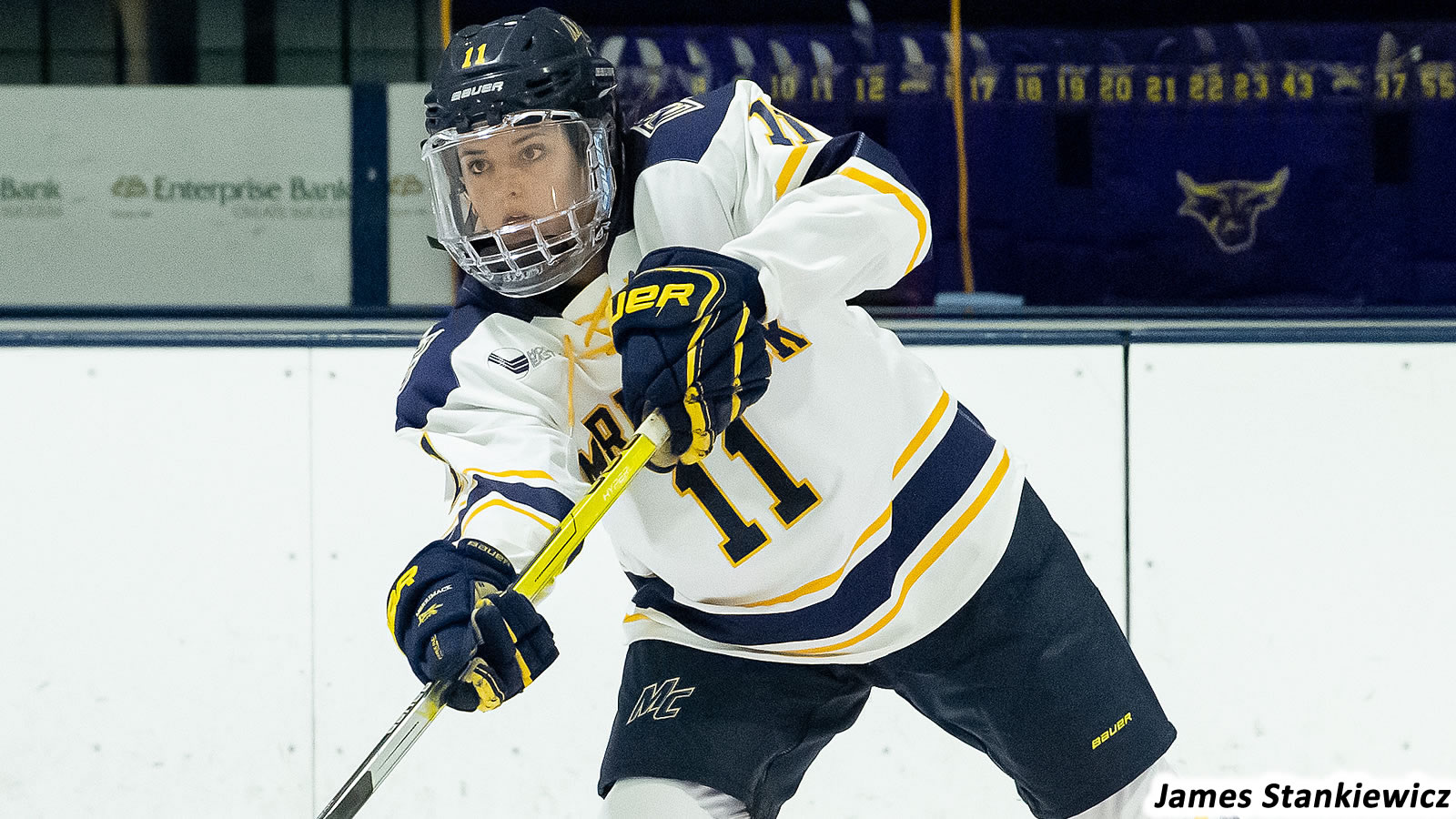 NORTH ANDOVER, Mass.- Senior Julia MacLean notched Merrimack's game winner with aplomb on Saturday, finishing on a 2-on-1 break in overtime to win the game with her first career goal, as the Warriors defeated the Holy Cross Crusaders in the regular season finale.

- For the second time in the series, Merrimack scored the opening goal of the game. The Warriors started from the jump with offensive pressure, capitalizing on their offensive momentum early. With a persistent forecheck leading the way, Hannah Corneliusen worked in the corner to grab the puck and send it out to the slot. Senior Gabby Jones made a beeline for the paint, where she sent in a crisp one timer for her second of the season.

- Holy Cross countered with a goal at 10:30, but the Warriors worked to return pressure quickly. Late in the first, Merrimack jumped in through the defense as Sam Lessick cut in on goal from her zone entry to get an initial shot and an opportunity on a rebound. With the puck still kicking loose, Teghan Inglis got a shot on target but couldn't break the line.

- The Warriors continued their offensive charge in the beginning of the second period, working on a quick give-and-go play with the cycle down low. Katie Kaufman carried the puck in on the break into the zone, dishing to a charging Emily Oosterveld for a shot on goal. The Crusaders' netminder kicked out a heavy rebound where Madison Oelkers got another chance on for Merrimack before Holy Cross' defense stepped in to break up the play.

- Continuing to pressure with odd-number breaks, the Warriors cashed in at 9:01 of the second. Sam Lessick brought the puck into the zone, with Katie Kaufman pulling the defender in for the 2-on-1 as she closed in on the paint. Lessick held the puck, taking the open ice to walk in and fire a wrist shot in to retake the lead.

- The Crusaders responded a minute later, sending in a wobbling puck that got through to tie the game up once again. Offenses upped the ante in the third period, as the Warriors posted 16 shots on goal working to break through once again. Goaltenders locked it down, with Gorski making 12 saves to force the game into extras.

- In overtime, the Warriors took advantage of the open ice in the 3-on-3 setup. Oosterveld worked a quick rush up the wing, pulling the defender in to cover her before she sent the pass over to an unmarked Julia MacLean. The defender walked in and fired between the glove and post to win the game for Merrimack.

- Merrimack has swept the season series against Holy Cross, winning 5-3 on Nov. 6 before taking the Crusaders down on Feb. 18 by a 3-1 margin.

- Inglis notched three points on the weekend, adding an assist to her two goal performance on Friday.

- MacLean is now one of eight Warriors who have notched their first goal with Merrimack this season.

- This is the second game the Warriors have won in overtime, with the first coming by the same 3-2 margin against New Hampshire on Nov. 12 at Lawler Rink.

The Warriors will be set for the Opening Round of the Women's Hockey East playoffs on Wednesday, Feb. 23 with time and opponent to be announced by the league.