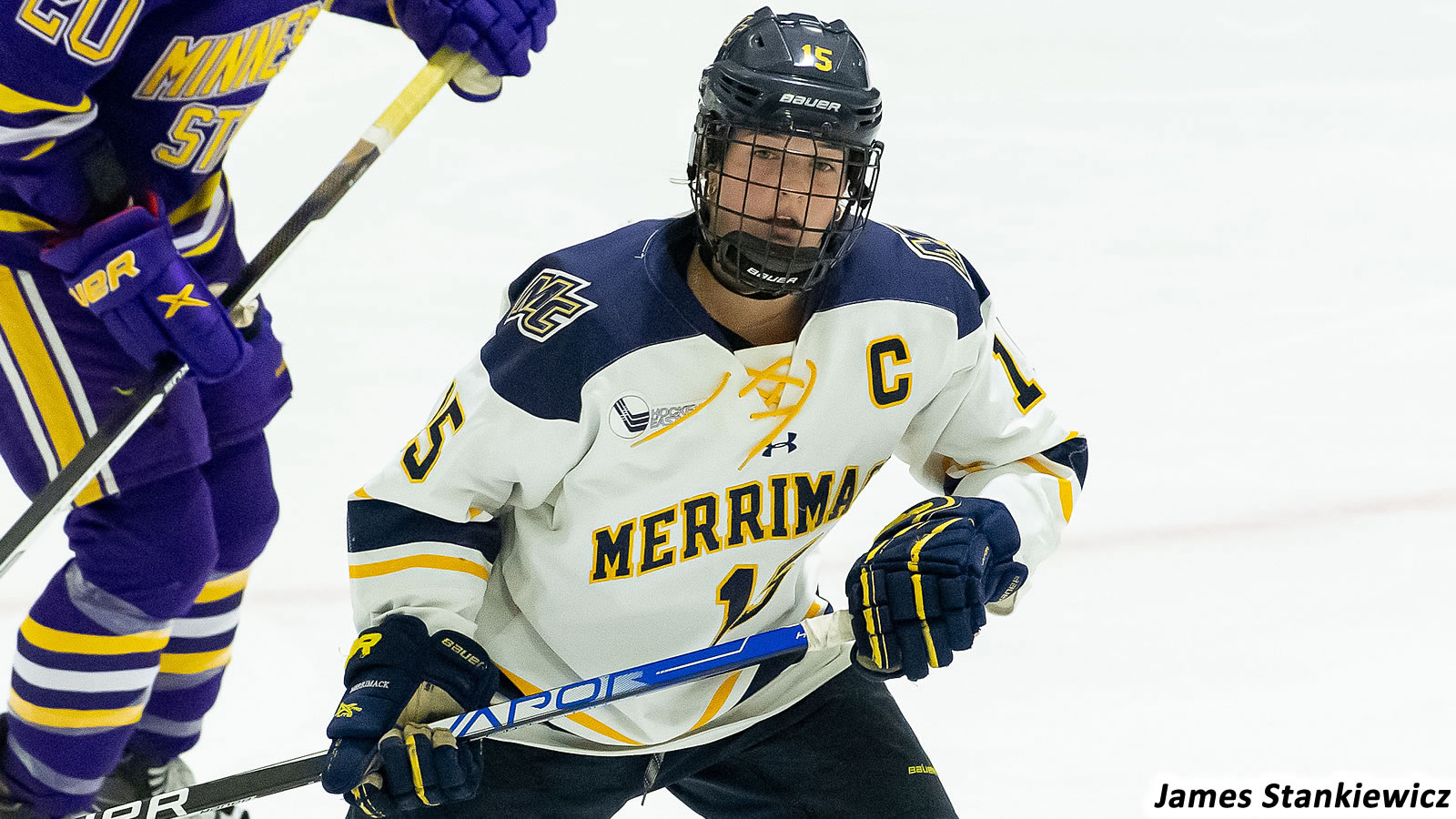 DURHAM, N.H.- In a dominating performance at the University of New Hampshire, the Merrimack women's ice hockey team earned the program's first-ever playoff win in the Women's Hockey East Playoffs Opening Round. Four goals as well as lock-down defense propelled the Warriors to a 4-1 win over the Wildcats on Wednesday night.

- On a delayed penalty, the Warriors worked the perimeter to open a shooting lane with six skaters on. Teghan Inglis handled the puck in space, sending it to Katie Kaufman at the point where she looked to set up the play. Kaufman dished over to Jullia MacLean at the top of the circle. MacLean sent the puck in with her head up, where Sam Lessick got her stick for a rising deflection for her second goal in as many games.

- With open space on a 4-on-4, Kaufman carried the puck into the zone, curling in the faceoff circle before working a give-and-go with Gabby Jones. Kaufman kept her head up, driving to the net to get her defender to over commit, leaving a lane for Jones to break through to double the Warriors lead.

- On a power play following their second opportunity, the Warriors sprinted for a quick 3-on-2 rush, with Sam Lessick putting a dangerous opportunity on goal, with Teghan Inglis chasing for the rebound for another challenging look before the puck skipped to the corner.

- Goaltender Emma Gorski continued to anchor the Warriors 200 feet away. The Wildcats looked to drive their offense in the final period to put a dent in the Warriors lead but were staved off by Gorski. One of the biggest saves for the junior came with 13 minutes to play in the game as UNH broke in with numbers, trying to catch the backdoor option before getting stuffed by Gorski's quick moves to the opposite post.

- Merrimack struck again on the power play, working to overload the UNH penalty killers to open up a lane in the slot. Julia MacLean quarterbacked the play, passing between Allison Reeb at the points. The defender, seeing the option open, passed to Gabby Jones sitting in the high slot, who rifled a shot on goal. Her initial shot was saved, but a patient Courtney Maud was waiting in the crease to put the rebound home.

- The Wildcats still had a bit of life late in the third period, getting on the board after a puck pinballed down low and deflected in.

- On the penalty kill, the Warriors continued their lethal defensive attack. Combining Gorski's 30 saves with 15 blocked shots on the night, the penalty kill went 4-for-4 to negate chances for the Wildcats.

- While shorthanded to close out the game, defender Teghan Inglis cemented the final goal of the night with a long clearing shot from deep in the zone into the empty net for her 13th goal of the season.

- The Warriors' offense has continued to ride the hot hand, with Teghan Inglis scoring her fourth point in three games.

- Both Gabby Jones and Sam Lessick have scored goals in back-to-back games for the Warriors.

- Katie Kaufman added two assists on the night for her fifth two-point game of the season.

- None of the Warriors goals came at even strength on the night, with tallies coming with an extra attacker for a 6-on-5, a 4-on-4, a power play and shorthanded.

- This is the Warriors' first playoff victory in program history. The team's previous appearance was in 2018, when the Warriors faced off against the Providence Friars in a best-of-three series.

The Warriors will continue on in the Hockey East playoffs, taking on the No. 1 overall seeded Northeastern Huskies on Saturday, Feb. 26 at 7:30 p.m. with the battle featured on NESN+ from Matthews Arena.