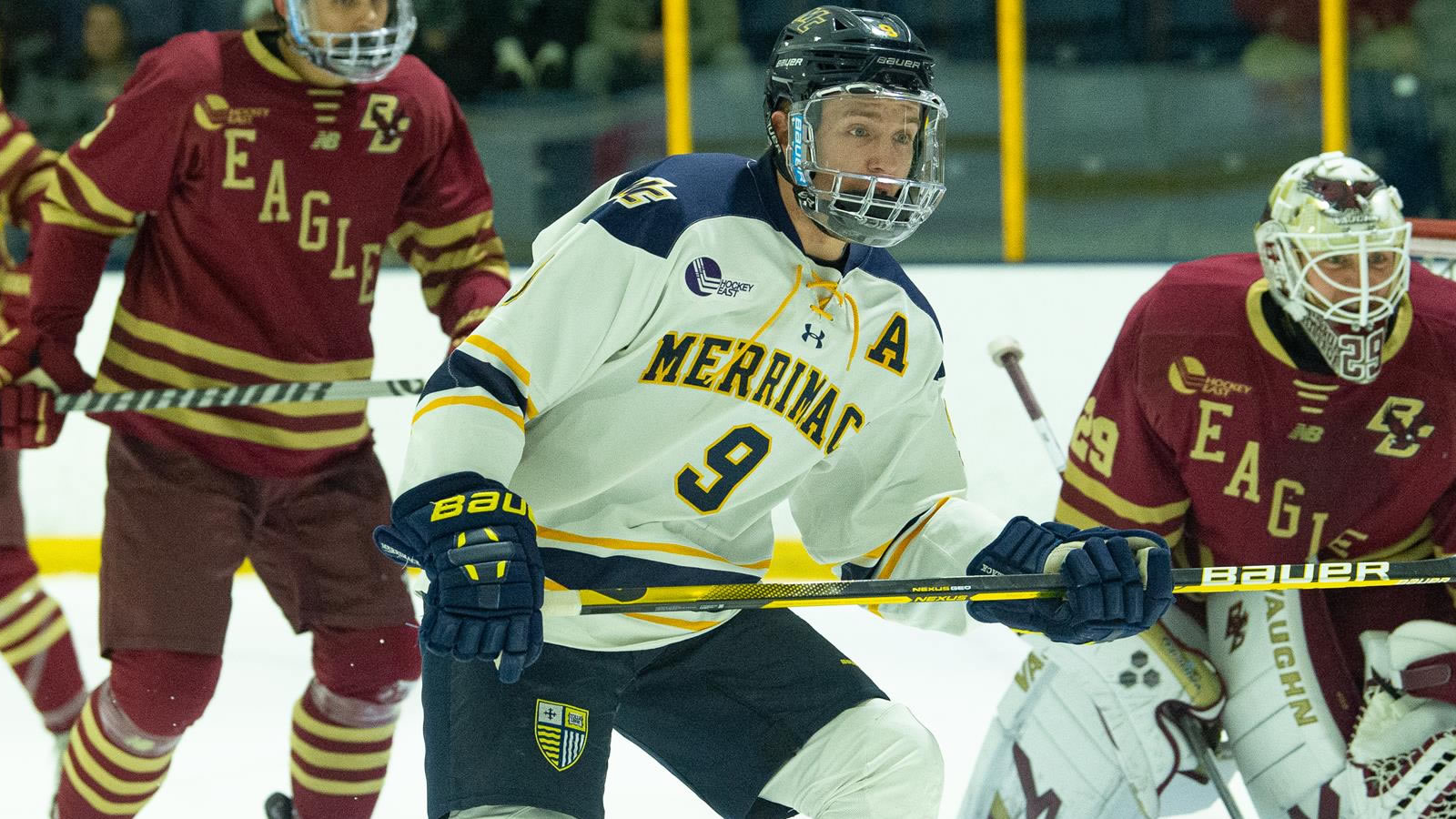 DURHAM, N.H. - Ben Brar's out of this world power play goal in the third period was potentially the highlight of the season, as the Merrimack College men's hockey team topped New Hampshire, 4-3, Saturday night at Whittemore Center.

Brar and Liam Walsh combined on an incredible play when Walsh was behind the attacking net and faked as if he was going to pick the puck up on his stick and tuck it into the top corner. Instead, Walsh left the puck for Brar, who swooped through and wrapped it around into the net past the unsuspecting goalie.

Filip Forsmark and Christian Felton also lit the lamp and Walsh scored a goal of his own a minute and a half after the amazing tally to notch the eventual game-winner. Zach Uens had a pair of assists and Walsh and Brar also had multi-point games. Walsh led all scorers on the evening with a trio of points.

Zachary Borgiel made his second straight start in net and earned his second consecutive win with 25 saves on the evening.

Merrimack continues its incredible run in 2022 and has now won 11 of its last 13 games to creep up into a tie for second place in the Hockey East standings at the end of the night.

- Borgiel was sharp in the early stages of the game and kept the Wildcats at bay. New Hampshire did eventually break through with just under nine minutes to play in the frame to take a 1-0 lead.

- Merrimack seemed destined to be down after 20 minutes of play when the teams lined up for a faceoff with 35 seconds remaining, but it took just a moment to change the direction of the game. Walsh dug in at the left dot and won the draw cleanly back to Forsmark, who unloaded and sniped to the far side of the net to tie the game.

- The Warriors came out a rejuvenated team in the second thanks to the late goal and cashed in because of it just under seven minutes into the frame. After Merrimack won a loose puck battle, Max Newton shoveled the puck to the near point for Declan Carlile. The defenseman walked to center point, then left a pass for Alex Jefferies at the top of the right faceoff circle. Jefferies opted not to shoot, but instead slid a pass through the slot for Felton, who gathered the puck and ripped one to the top of the net for Merrimack's first lead of the game.

- New Hampshire had a pair of chances in the latter stages of the frame, but Borgiel was up to the task and stopped all six shots he faced to make it 19 on the evening after 40 minutes.

- Merrimack went to the man advantage early in the third, which set the stage for Brar and Walsh. Uens started the play when he sent the puck down low to Brar, who fed Walsh behind the net before they completed the incredible play. It marked the 14th game in a row where the power play unit had scored at least one goal.

- With the crowd stunned, the Warriors stretched the lead to three just 90 seconds later. While the teams skated 4-on-4, Uens headed towards the left side of the offensive zone, but left a drop pass for Brar at center point. The junior slid it to the top of the right faceoff circle for his classmate, Walsh, who bombed one home to the near side.

- New Hampshire made things interesting in the final eight minutes of the game, as it netted a shorthanded goal, then jammed one home with 2:14 to play.

- In the final moments, the Wildcats had a couple more opportunities, but Borgiel came in clutch, including a ten bell glove save to help secure the win.

- Brar continues to lead the Warriors in power play goals with six on the season.

- Carlile sacrificed the body all night to the tune of a game-high six blocked shots. His 72 blocked shots for the year rank him seventh in the nation and first in Hockey East.

- Walsh topped the team with a +2 rating.

- Mick Messner had the best effort at the faceoff dot with seven wins on 10 chances.

- Following results from this weekend, Merrimack is now guaranteed a top-6 slot in the upcoming Hockey East tournament.

- The three points tied a single game career-high for Walsh and marked his fifth multi-point game on the campaign.

Merrimack closes the regular season next weekend with a home-and-home set against Northeastern. The teams meet Friday in Boston, then match up Saturday at Lawler Rink with both times set for 7:00 pm.