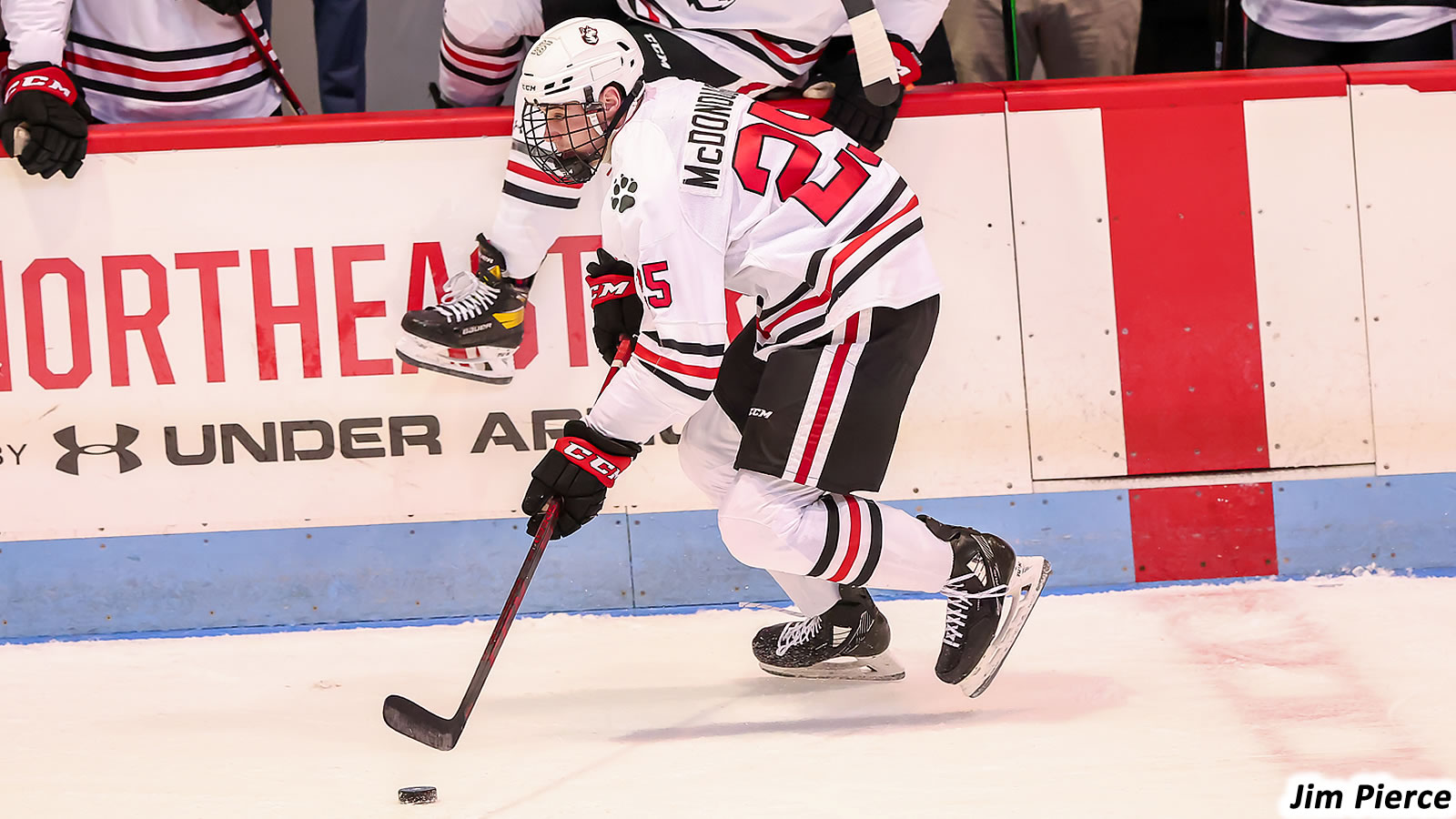 Trailing 2-1 entering the third period, Northeastern notched four goals in the final frame, two from junior Aidan McDonough, to complete a big comeback win on the road. McDonough tallied another goal in the second, giving him the Huskies' first hat-trick of the season. UConn got on the board late in the first period with a power play goal with 10 seconds remaining on the clock. A UConn shot bounced off a Northeastern defender and Jake Flynn tucked it in. Connecticut followed up with a goal early in the second from Jachym Kandelik, 1:33 into the frame for a quick 2-0 lead.

Northeastern answered back midway through the period on a two-on-one from the Huskies' top line; McDonough (20) had the option to pass but fired a shot top shelf from the near-side faceoff circle to chip away at the UConn lead.

Northeastern found itself down two players on a 5-on-3 penalty kill to start the third period but killed off the penalty. They used that momentum to tally the tying goal 3:33 into the frame - Jack Hughes (6) parked himself between the faceoff circles on an offensive rush while his brother Riley Hughes (10) skated up the right-side boards. Riley passed it back to Jack who settled the pass and quickly fired a slapshot to tie the game.

UConn attempted to answer back on a quick power play goal just four seconds into the chance but the goal was called back as the potential goal-scorer, Carter Turnbull, interfered with NU's Devon Levi before the shot.

McDonough (21) tallied his second of the night 11:40 into the third; a breakout pass from Jayden Struble (9) found Sam Colangelo () in the neutral zone. McDonough cut through and was met with Colangelo's pass and he flicked the puck past the left pad of Darion Hansen. Northeastern led 3-2 after being down 0-2.

Just minutes later Ty Jackson (6) who had been all over the ice finally got on the scoresheet as he put home a rebound off a Gunnarwolfe Fontaine (15) shot, to extend the lead to 4-2. McDonough (22) completed his hat trick on an empty-net bid from his own defensive zone, assist to Jackson (14).

Sophomore netminder Devon Levi followed up his 60 save performance on Friday by stopping 40 of 42 UConn shots on the afternoon, putting his total to 100 saves on the weekend. His record on the season is now 18-7-1.

The sweep is just the first weekend sweep of UConn by Northeastern since the 2016-17 season, when NU swept UConn twice, first in the regular season, and then in the Hockey East opening round. Since then, UConn held a 6-3-0 record against Northeastern.

Northeastern finishes their February schedule with a record of 6-2-0.

Quick turnaround for Northeastern, who travel to Burlington, Vermont early next week to wrap up the season series with the Vermont Catamounts next Tuesday, March 1, at 5:30 p.m. The game will be streamed on CollegeSportsLive.