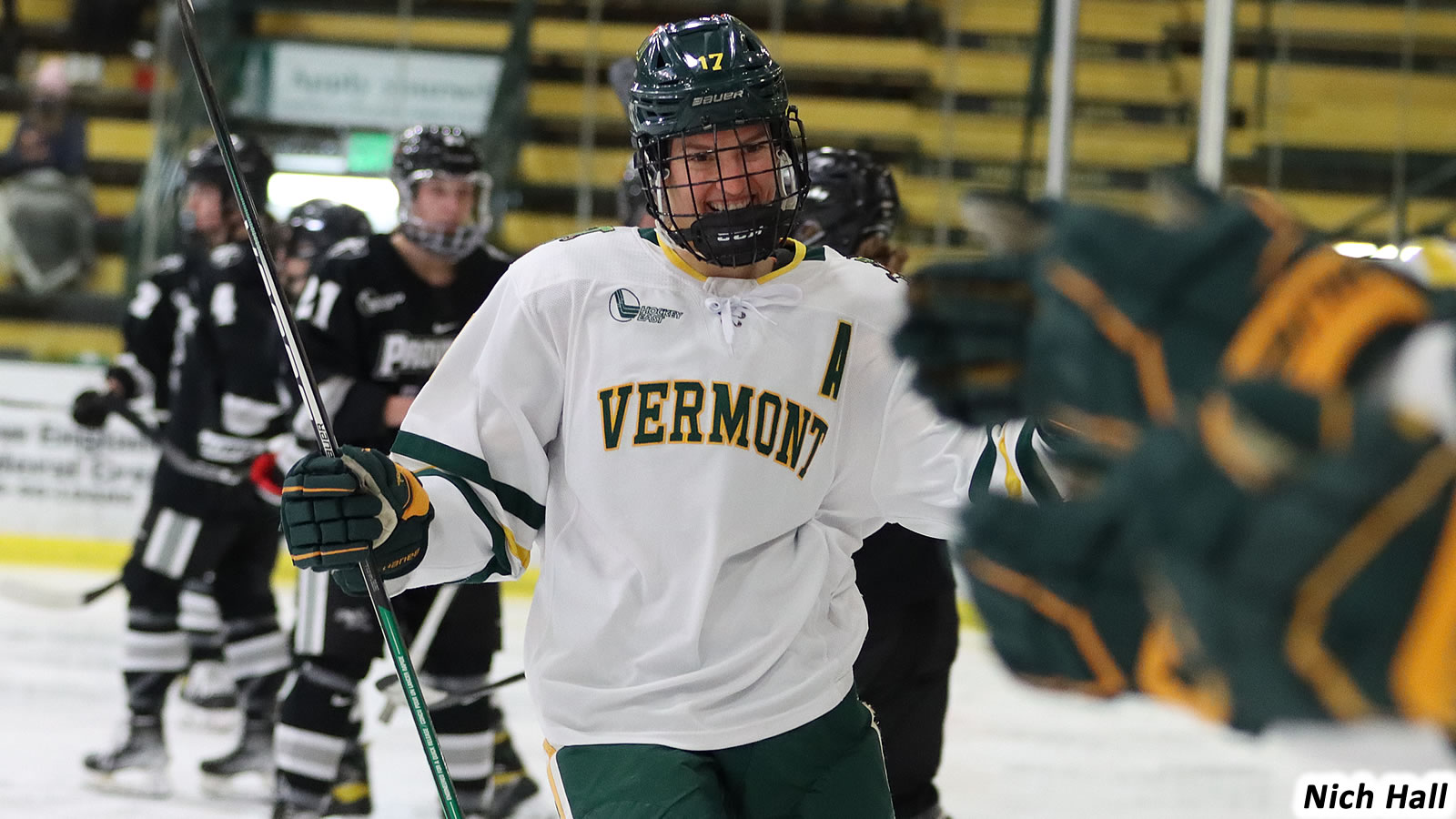 BURLINGTON, Vt. - The tenth-ranked Vermont women's hockey team advanced to the Hockey East Semifinals for the third time in program history with a 4-1 win over Providence Saturday afternoon from Gutterson Fieldhouse.

"First, I want to thank the fans that came out and supported us today," said Head Coach Jim Plumer. "It was a great atmosphere and really made the game feel extra special. This was a classic team win for us, with contributions up and down the lineup. It started with a great save by Jessie McPherson in the first 30 seconds or so, and with Schafzahl getting the early goal it gave us the chance to seize the early momentum. I love the way we got better as the game went on and thought we really got in rhythm in the second period. It was great to get the first playoff win in five years and I am looking forward to us hosting a semifinal game on Wednesday evening in front of an equally enthusiastic crowd."

- The Hockey East scoring champion Theresa Schafzahl started the Catamounts postseason run with a goal just 1:58 into the contest. Schafzahl cut out front from the corner and beat Providence's Sandra Abstreiter under her arm for her 24th goal of the season. Alyssa Holmes assisted the tally setting a new program record for single-season assists with 23.

- Antonia Matzka doubled the Vermont lead with 3:54 left in the first with her first goal as a Catamount. She found the back of the net with a wrist shot from the point through traffic that Abstreiter never saw. Reagan Miller and Lilly Holmes assisted on the tally.

- The Catamounts made it 3-0 on the power play 4:18 into the second period. Maude Poulin-Labelle centered a pass in front of the net and it deflected off Lily Humphrey's skate and in. Schafzahl picked up an assist on the goal as well.

- Providence's Lily Hendrikson pulled the Friars back within two with a power play goal with 5:41 left in regulation. Hendrikson picked up her third goal of the season in the midst of an extended goalmouth scramble.

- Schafzahl closed out the win with an empty-netter for her 25th goal of the year, extending her own UVM single-season record.

- Theresa Schafzahl had her fifth straight multi-point game this afternoon. In the last five games, she has eight goals and three assists.

- With the win Jessie McPherson set a new program record with 15 wins this year.

The Catamounts return to action Wednesday for the Hockey East Semifinals. Game time is set for 6 p.m. It will be Vermont's first-ever home semifinal game. Vermont will either host the three-seed UConn or the nine-seed Merrimack if they're able to upset Northeastern later tonight.