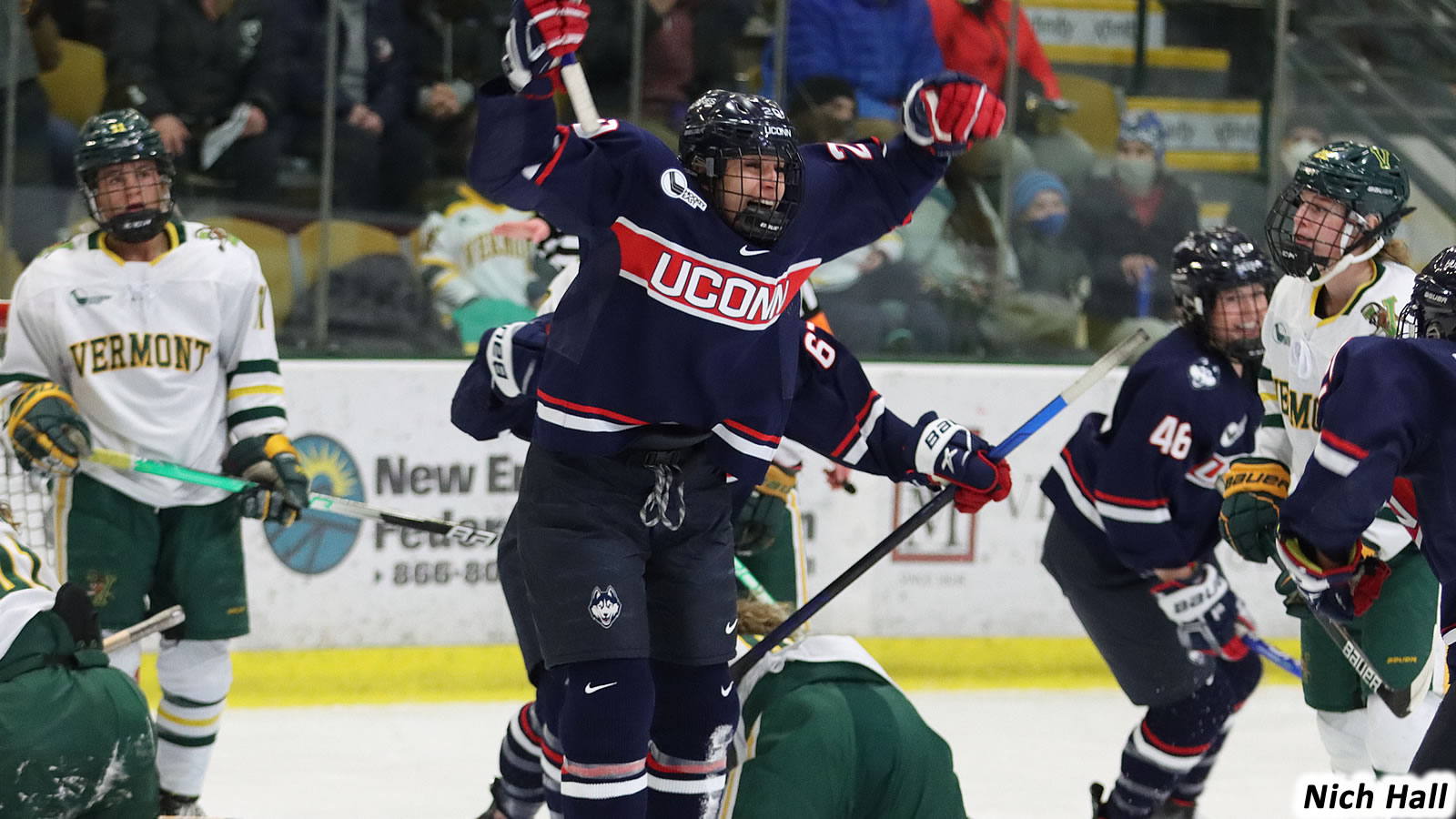 Burlington, Vermont - The University of Connecticut women's hockey team is headed to the Hockey East Championship game following a 3-1 defeat of the University of Vermont. UConn was propelled to victory by freshman Megan Warrener who recorded 30 saves while allowing only one goal.

The first period began with both teams pushing the pace. Vermont and UConn both traded blows early, as both teams looked to get on the board first. Vermont would have multiple chances to break open the scoring as three of their shots would ring off the post and just bounce wide. Meanwhile the Huskies would suffer the same fate as two of their tips would ring off the pipe or be saved. UConn would look to capitalize on the power play midway through the first period however, Vermont would prevent any real scoring chances. Vermont would respond by drawing a power play of their own, trying to break open the scoring. Following an impressive penalty kill by the Huskies, UConn would enter the Vermont zone, and eventually score as a puck would bounce around in front of the net and find the stick of junior Clair Peterson who would score to give UConn the 1-0 lead heading into the break.

UConn would use the momentum gained from the first period goal and never look back. The defense and freshman goaltender Megan Warrener would prevent any hopes of a Catamount equalizer as they would make save after save and block after block. Midway through the second period, on a Huskies power play, graduate student Taylor Wabick would find her sister and fellow graduate student Morgan Wabick who would fire the puck from the point and score to give UConn the 2-0 lead. With time running down in the second period, a tripping penalty on UConn would give Vermont the man advantage heading into the third period.

In the third period, UConn's penalty kill would once again step up to the task and prevent Vermont's power play from cutting the Huskies lead in half. Once again in a back and forth third period, UConn would not let up as the Huskies would continue to pressure the Vermont puck handlers and create turnovers. With under 5 minutes left to play, senior Viki Harkness would force a turnover and find a streaking Jada Habisch who would score to give UConn the 3-0 lead. The job was not finished as freshman Megan Warrener would once again step up making big save after big save. With the goalie pulled and under ten seconds left, Vermont would score. On the following faceoff, time would run out and the Huskies would come away with the 3-1 victory.

With the win, UConn advances to their third Hockey East championship game in the last five years and will play Northeastern on Saturday March 5. 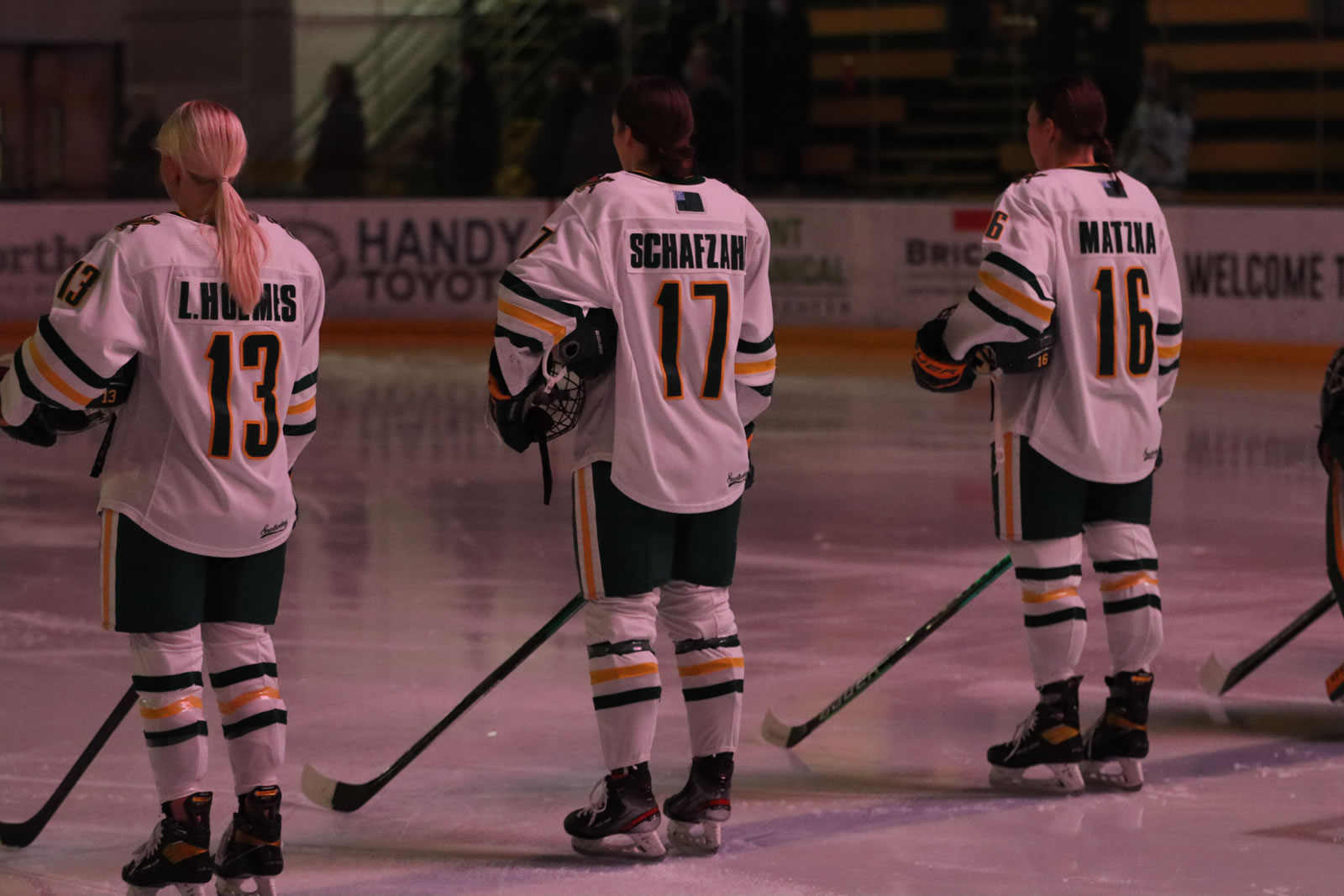 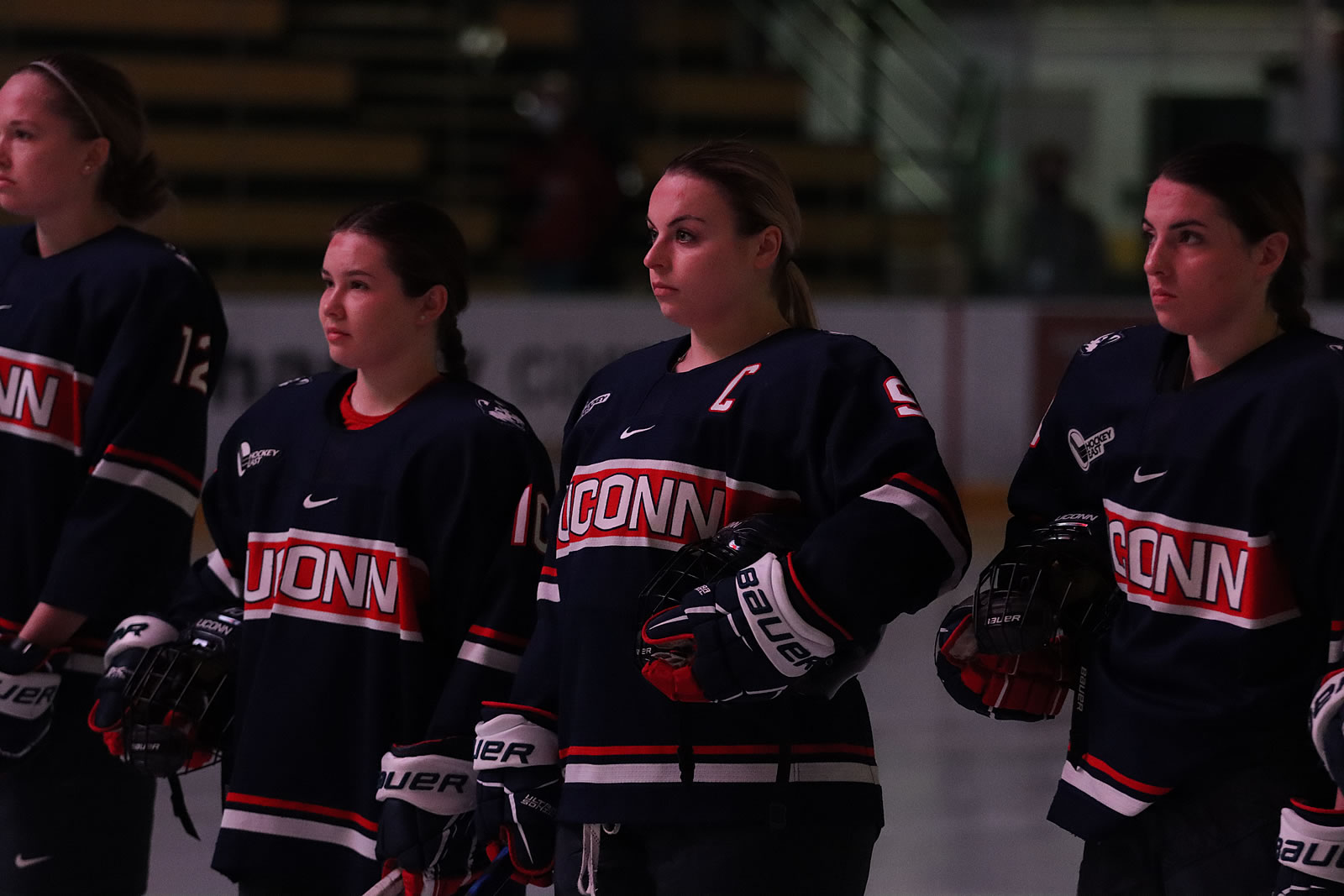 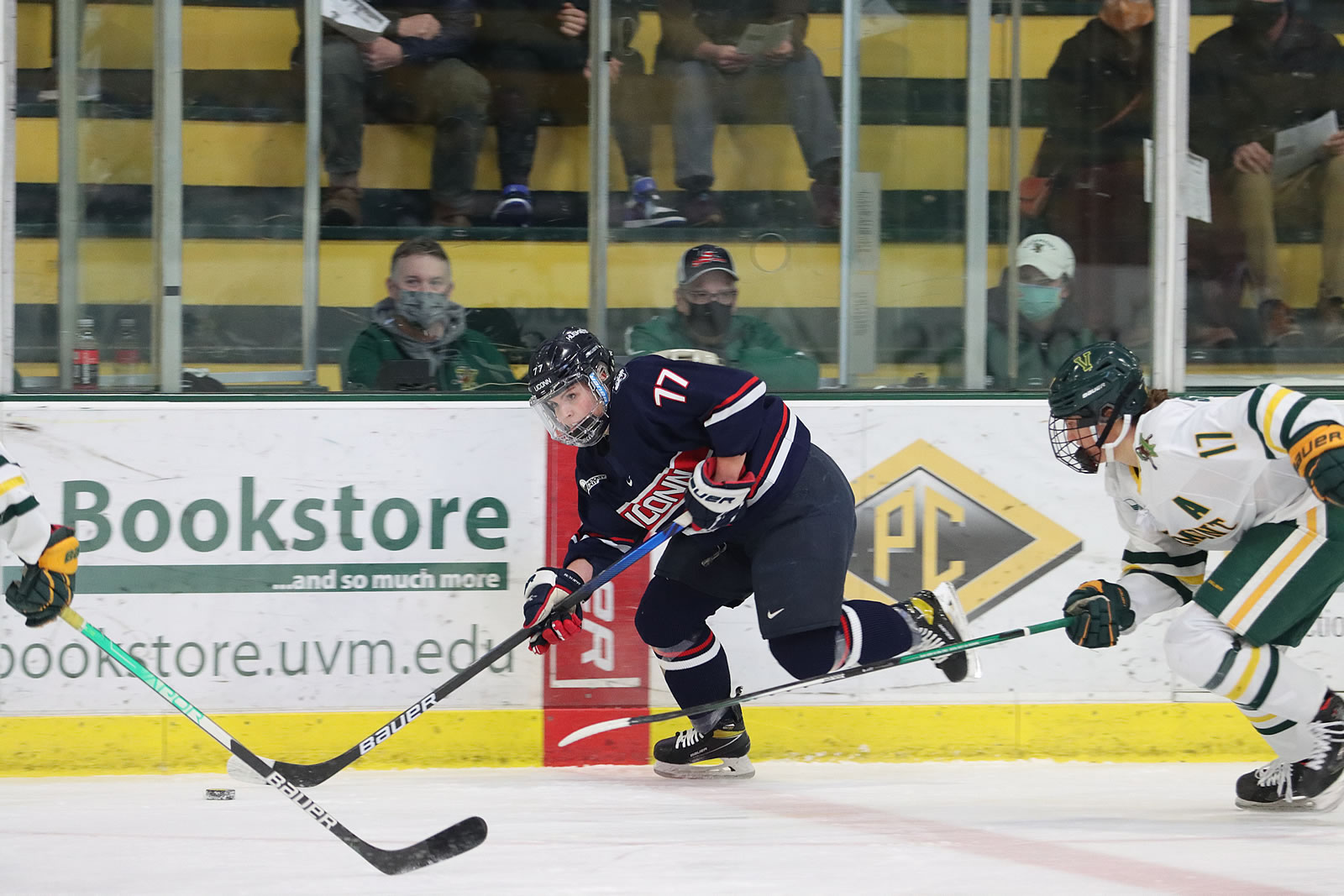 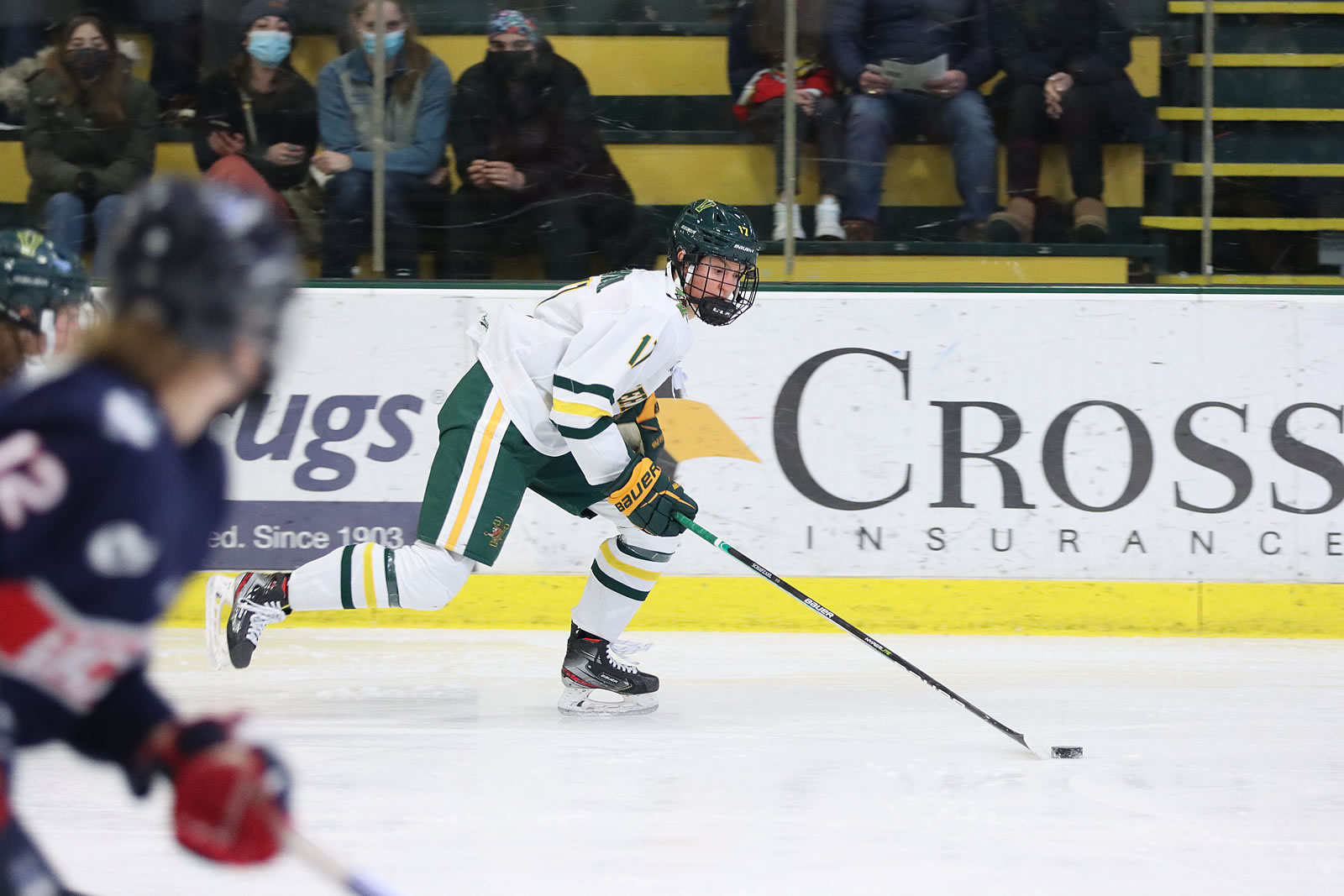 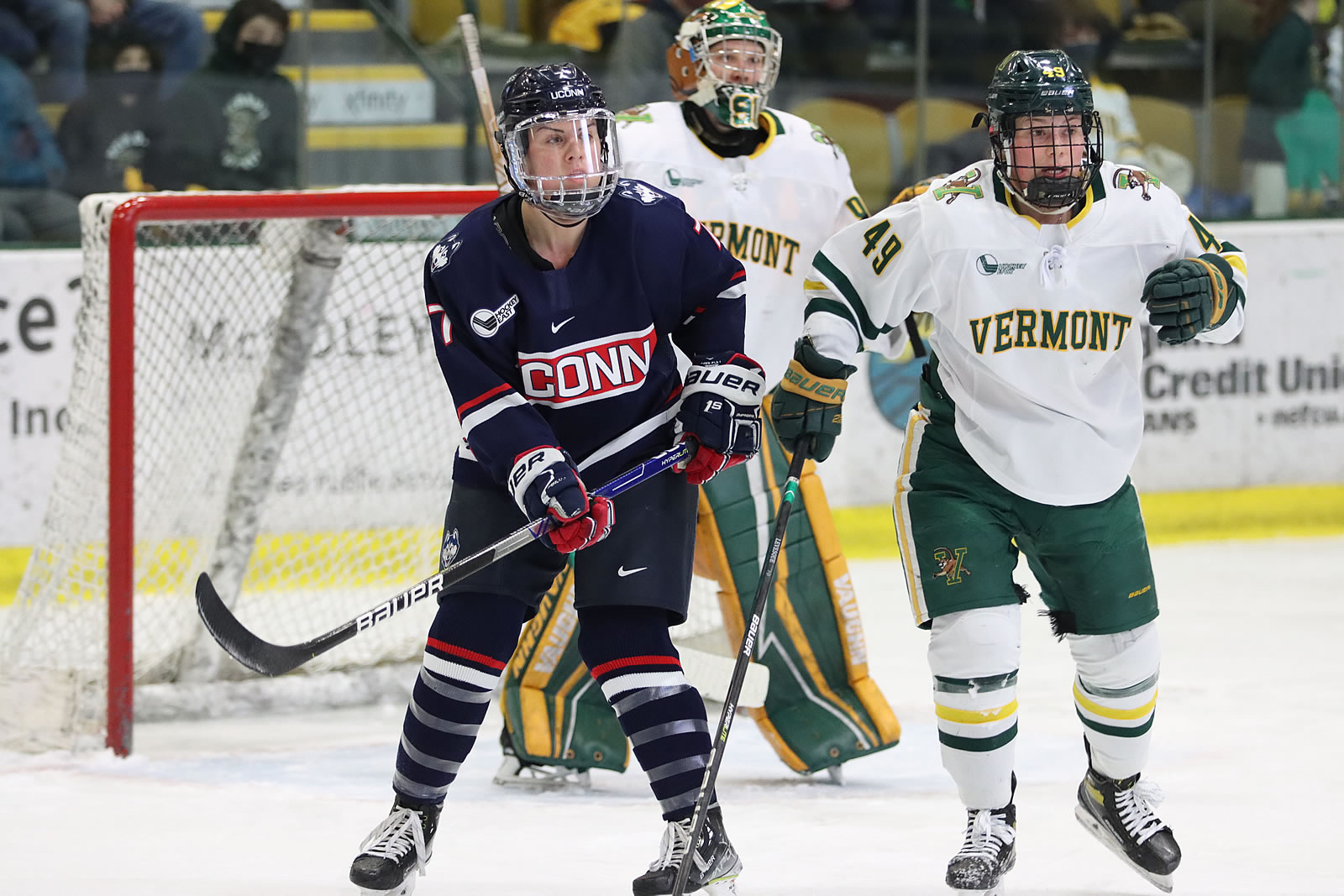 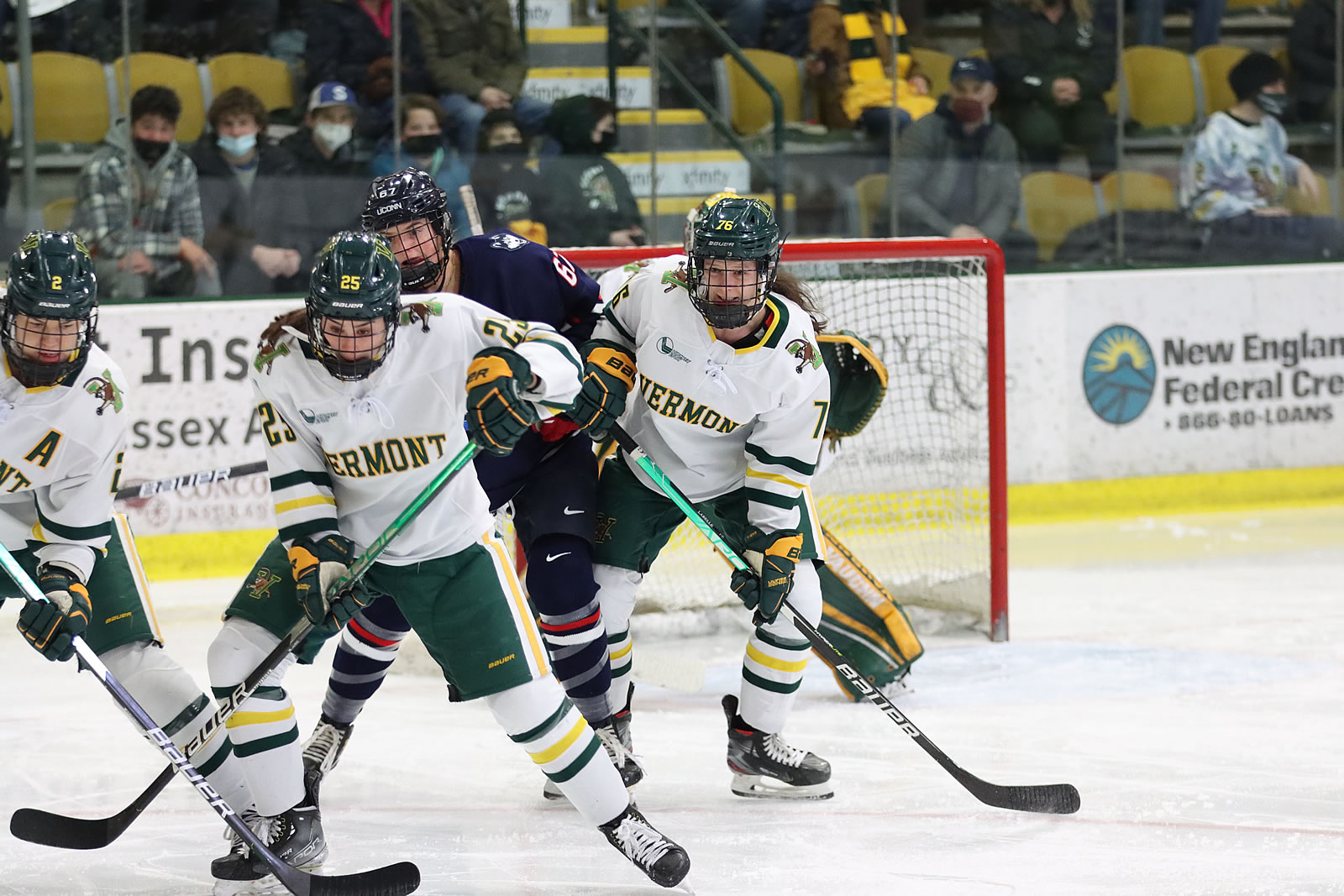 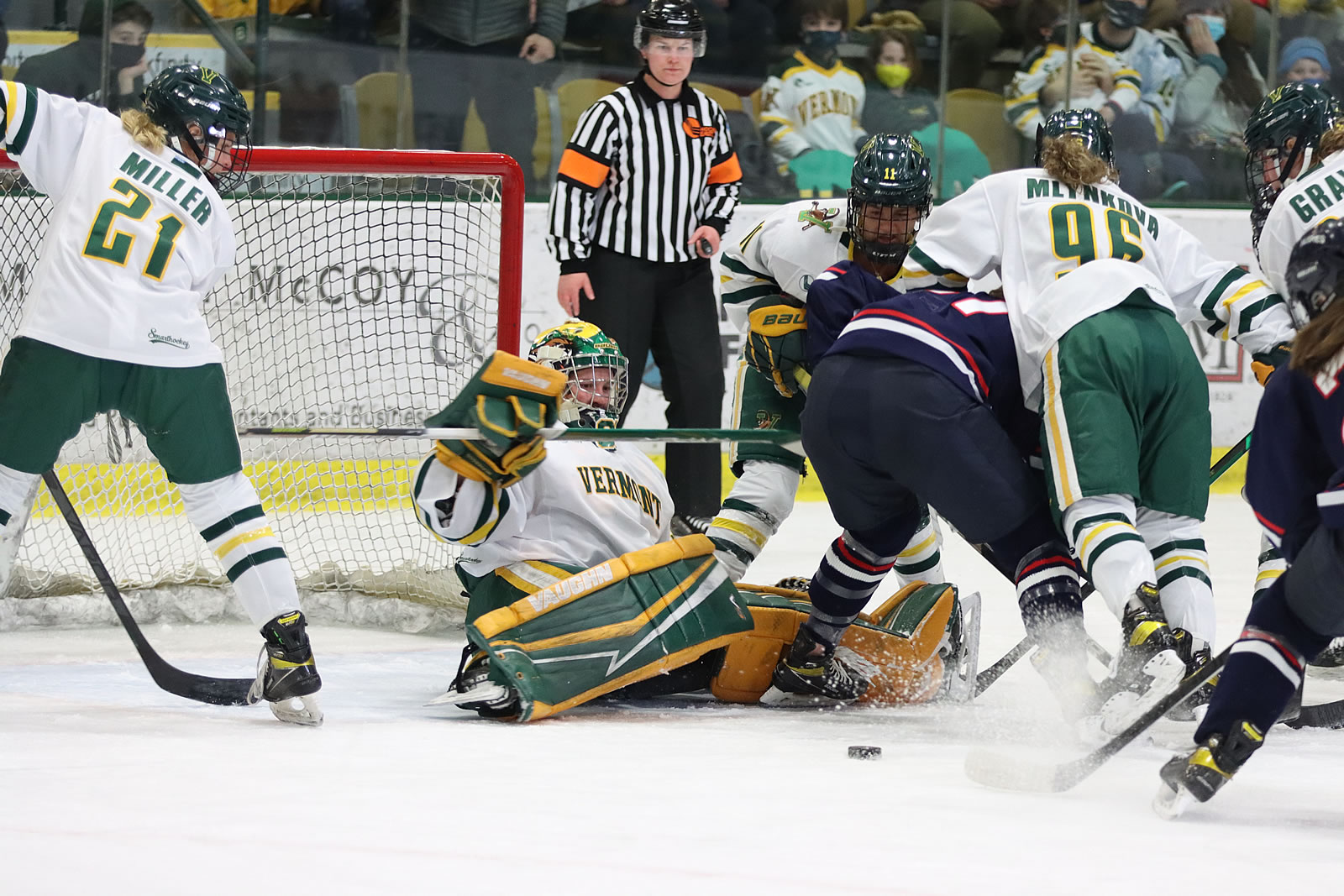 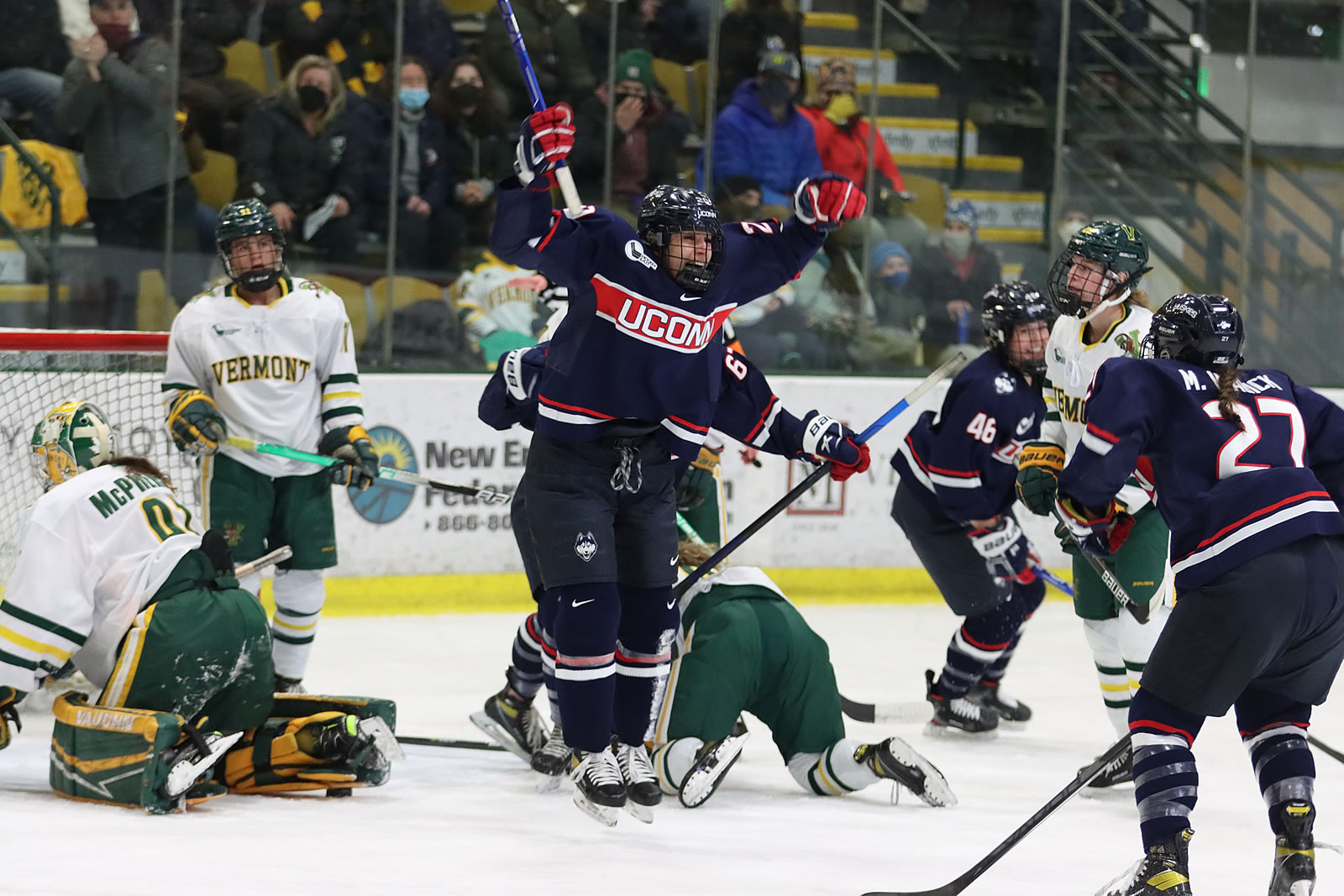 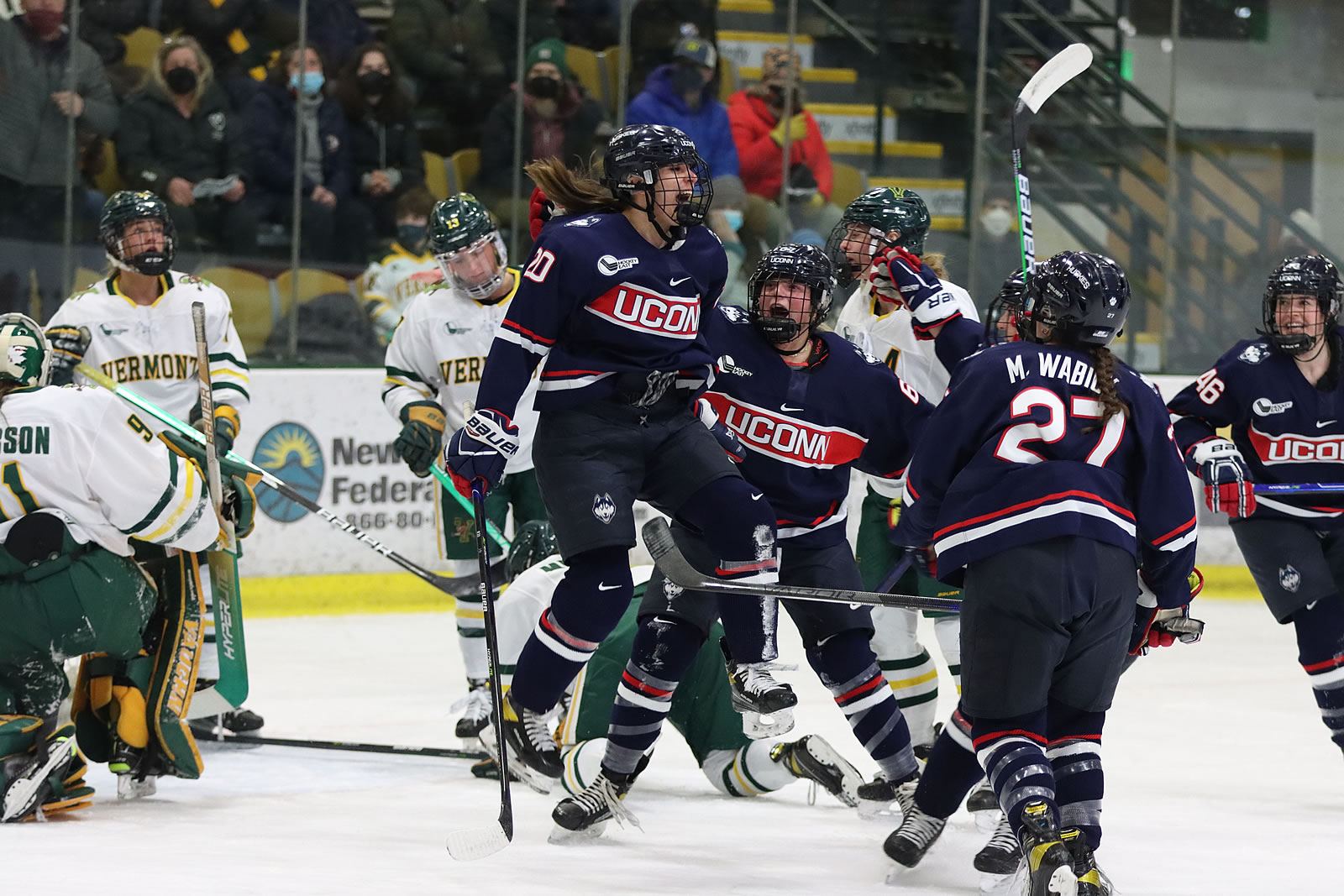 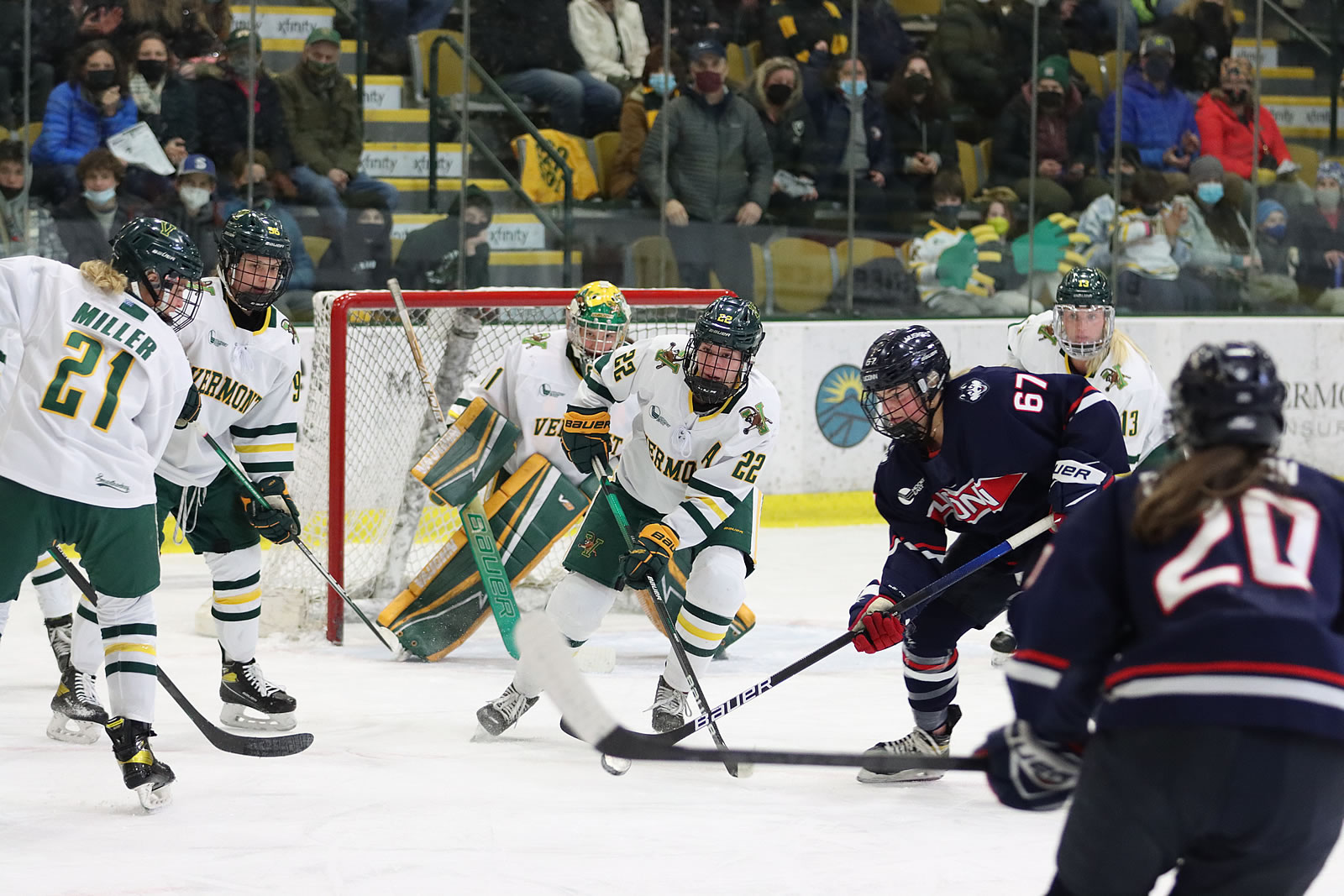