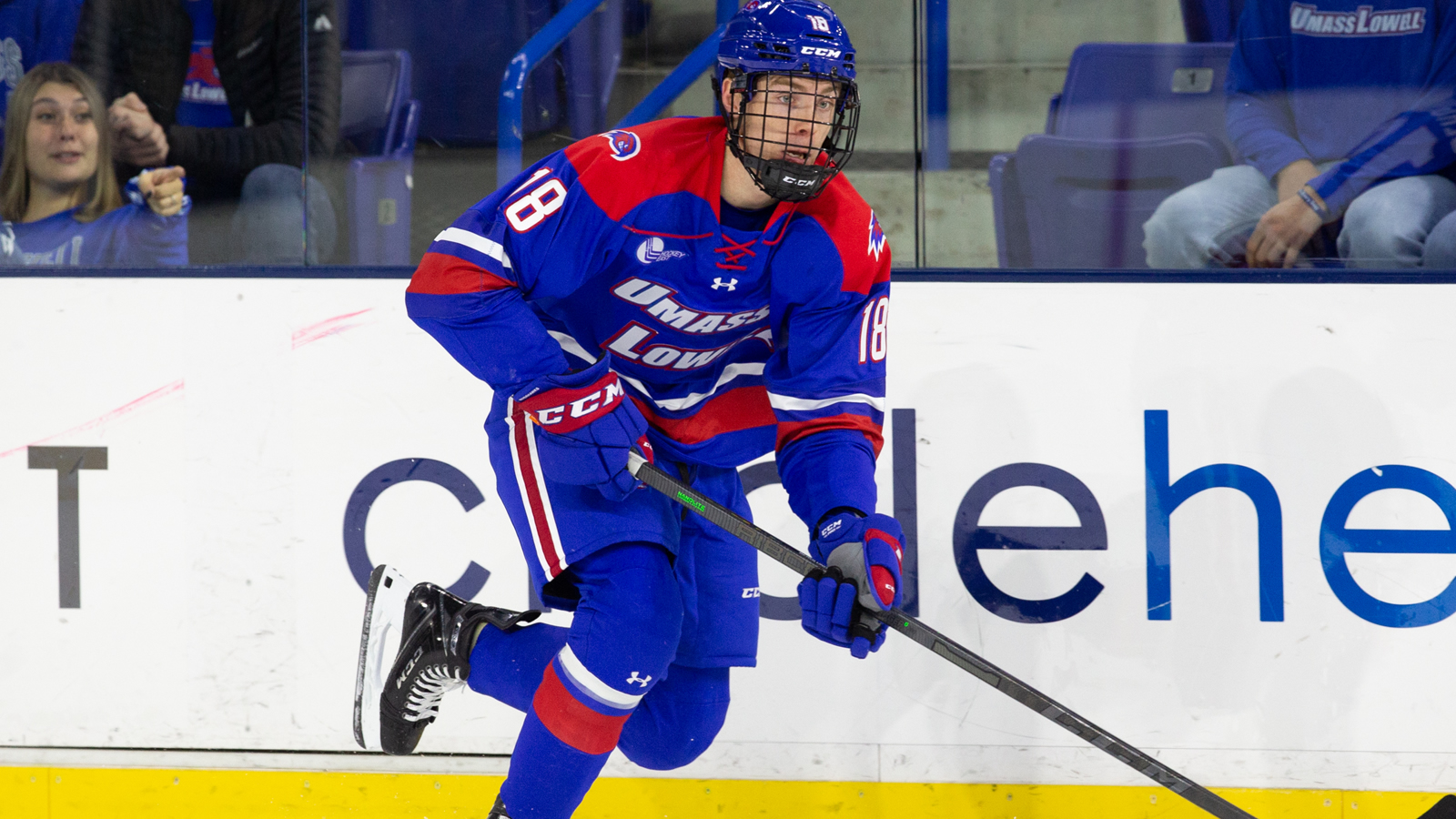 Leading the scoring charge, junior Andre Lee (Karlstad, Sweden) net a pair of goals in the six-goal rout, including the opening tally just over four minutes into play. Joining in on the goal-scoring efforts, seniors Lucas Condotta (Georgetown, Ontario) and Reid Stefanson (Winnipeg, Ontario) as well as juniors Blake Wells (Blackie, Alberta) and Marek Korencik (Zilina, Slovakia) picked up a tally each.

Junior Carl Berglund (Hammaro, Sweden) played a key role for the River Hawks in the matchup, dishing out three assists to pace the squad in points. The Swedish forward was one of four River Hawks to finish the night with multiple points. His three-point night was bolstered by two-point games from Stefanson, Lee and junior Brian Chambers (Weymouth, Mass.)

"We're pleased to get a road win at the Whittemore. It's been tough for us the last few outings here," commented Head Coach Norm Bazin. "Five different scorers, a road win, and I thought our goaltending was good. I thought our (penalty kill) was good, and we chipped in with a shorty. That's a big deal for us."

The River Hawks earned the early lead off a shot from Lee just 4:10 into the first. After shutting down the Wildcats in the zone, graduate student Nick Austin (St. Louis Park, Minn.) corralled the puck and sent it along the boards to an unattended Berglund under the blueline. Seeing his linemate in the neutral zone, Berglund sent the puck up to a waiting Lee. Facing minimal pressure, the forward coasted towards the UNH goal and flicked a shot through the legs of Wildcats goalie Mike Robinson to take the 1-0 lead.

Moments later, UNH leveled the score after an unlucky shot popped out of Savory's reach and crossed the goal line to tally one for the Wildcats.

Fending off another flurry of shots from UNH in the waning minutes of the first frame, freshman Isac Jonsson (Angelholm, Sweden) blocked a shot from Wildcats' centerman Jackson Pierson to halt their attack. Sodergren worked quickly to scoop up the loose puck and send it down the ice. Unguarded with nothing but open ice ahead of him, Wells outskated his defender and dangled the puck out of Robinson's reach before backhanding it in to grab UMass Lowell a 2-1 edge heading into the first break.

After a quiet start to the second period, a UNH trip along the boards at the 8:49 mark sent the River Hawks to the power play. Winning the faceoff, Berglund redirected the puck off the boards to Austin. The defenseman quickly settled the play and crossed a pass to Stefanson on the wing. The alternate captain wasted no time as he fired a strong wrister off the crossbar and into the net to hand UMass Lowell a 3-1 lead.

UNH closed in on the River Hawks' two-goal margin late in the second off a sneaky shot to make it a one-goal game heading into the final 20.

The third period was a decidedly UMass Lowell-centric period with three of the four goals scored coming off the stick of River Hawks skaters. Lee sparked the offensive onslaught with his second of the night coming just seven minutes into the third. Picking the puck off a blocked shot, Berglund pushed a pass to Lee as he barreled down the ice. Stickhandling around Robinson, Lee lifted the puck over the unbalanced netminder to push UMass Lowell back up to a two-goal gap.

The Wildcats crept back seconds later to slash the lead, but the River Hawks quickly bounced back three minutes after. Down a man after a call sent graduate student Connor Sodergren (Tewksbury, Mass.) to the box, UMass Lowell brought out the penalty kill unit to hold off the UNH attack. Aggressive pressure from Condotta knocked the puck out of Colton Huard's grasp, forcing Condotta and Pierson to battle for possession in the neutral zone. Using his height to his advantage, Condotta stretched his stick out to poke the puck to an unmanned Stefanson. Dodging Pierson's oncoming hit, Stefanson spun around and dished the pass to Condotta, who slapped in the one-timer to make it a 5-3 score.

With his shorthanded tally, Condotta moves into a second-place tie in the UMass Lowell record books with four career short-handed goals in league action. He joins former River Hawk Ed McGrane in second and sits just one behind all-time leader Joe Pendenza.

With under a minute to go, UNH pulled their goalie and sent out an extra attacker in hopes of fighting their way back. A misdirected Wildcats pass made its way to Korencik who sent it down the ice into the empty net to secure the 6-3 road victory.

The River Hawks close out the regular season with their final home tilt on Saturday, March 5, against the Wildcats. Puck drop is slated for 6 p.m.