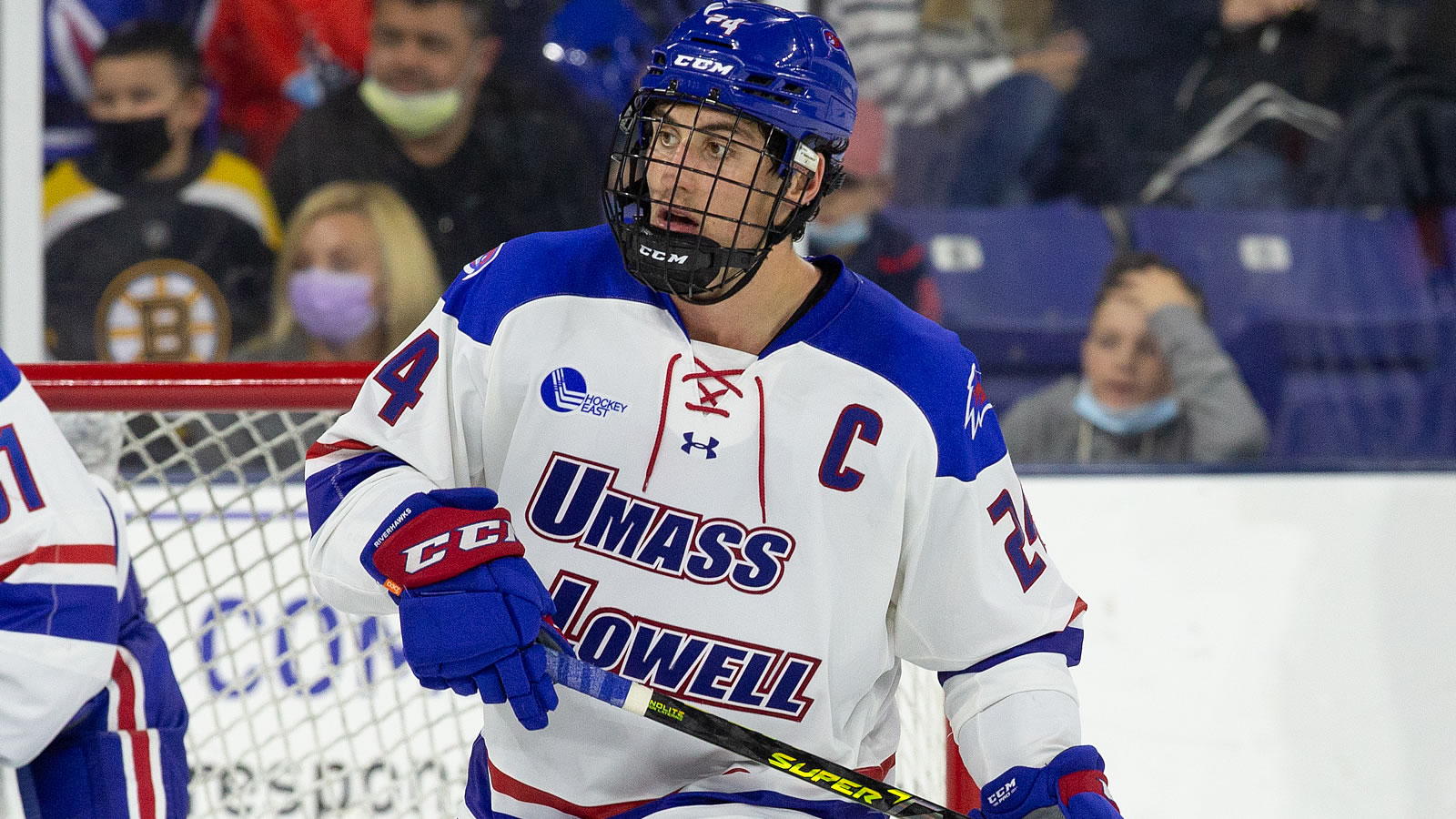 Senior forward Lucas Condotta scored a goal for the River Hawks
UMass Lowell Edged By Denver, 3-2, In Opening Round Of NCAA Tournament

"I liked the effort. I thought the guys left it on the ice. It's a very classy group of seven seniors. I liked our start today," commented Bazin. "Our penalty kill was good. Unfortunately, we got caught killing off three in the second, and that zapped a little bit of our energy. Where we were in the third, I was pretty comfortable with it. We gave one up on the power play, and that was the difference obviously."

"I fault nobodies' effort tonight. They left it on the ice, and I'm very proud of our group," remarked Bazin.

The River Hawks special teams capped its successful season with a perfect showing on the penalty kill, shutting down all four Denver power plays. Senior Owen Savory (Cambridge, Ontario) was a force between the pipes, stopping 25 shots and keeping the high-scoring Pioneer offense to just three goals.

"We didn't feel like the odds were stacked against us. We took it as a challenge and just came here. I thought we played a great game. They were just one goal better than us," commented Condotta.

The River Hawks applied the pressure early with a dominant presence at the faceoff dot and a shot on net off the stick of Korencik just 33 seconds into the action. UMass Lowell pushed forward with an aggressive offensive strategy, peppering Denver with a flurry of shots throughout the first 10 minutes.

The high-volume offense eventually cracked the scoring drought midway through the period when a quick wrister from Condotta in the slot shot past Denver's Magnus Chrona to give UMass Lowell the 1-0 edge early. With just over a minute on the clock, the Pioneers caught a lucky bounce to lock things up at 1-1 heading into the second frame.

The second period was decidedly defensive for both squads as they hunted down the lead. Although the Pioneers held a 9-3 edge in shots on goal, Savory held steady between the pipes to keep them off the board. An impressive defensive stand by the River Hawks penalty kill unit also shut down all three Denver power play opportunities to send the squads into the final block leveled at 1-1.

Denver struck first in the third to take a one-goal berth over the River Hawks with just over 10 minutes left. After trading penalties, both squads killed off the extra-man opportunities and brought things back to even strength. Back at full force, UMass Lowell wasted no time evening the score as Sodergren beat Chrona weakside to force a 2-2 tie with just over five minutes left.

With the threat of overtime looming, both teams put it in gear and traded blows as time winded down. The Pioneers eventually took back the lead off an unlucky bounce with just under three minutes left on the clock.

Pulling Savory in favor of the extra attacker, UMass Lowell went to work firing countless shots at Chrona in the search for the equalizer. Despite several close chances in the final minutes, the home team held on for the victory.