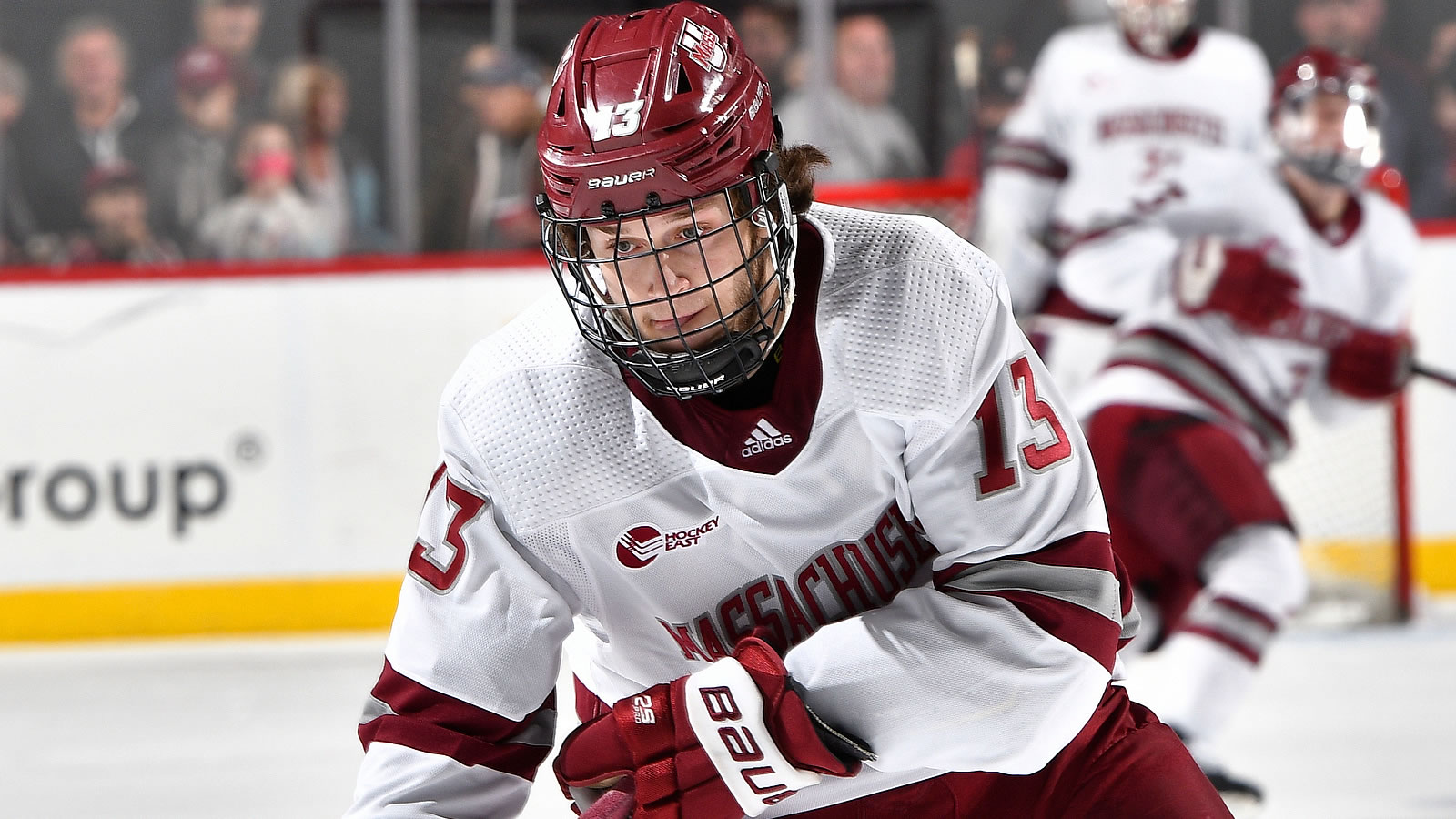 Junior forward Reed Lebster scored two goals for the Minutemen
Massachusetts Topped By Minnesota In Overtime, 4-3, In NCAA Opening Round

WORCESTER, Mass. - No. 10/9 University of Massachusetts hockey jumped out to a 2-0 lead, but No. 5/6 Minnesota rallied to force overtime and came up with the deciding goal in the extra stanza to defeat the Minutemen, 4-3 at the DCU Center on Friday night. With the setback, UMass ends the 2021-22 campaign with a record of 22-13-2.

The Minutemen opened the scoring with a 6-on-5 tally on a delayed penalty call 14:09 into the first period. Junior Reed Lebster knuckled a one-timer past goaltender Justen Close off tic-tac-toe passing from classmate Cal Kiefiuk and freshman Ryan Ufko for his eighth tally of the season.

Moments later on the ensuing power play, senior Garrett Wait redirected a shot from Ufko at the right point at the top of the crease to bring the advantage to 2-0 at the 15:05 mark. Senior Bobby Trivigno collected the secondary helper on the play for his 131st career point to become UMass' all-time leading scorer of the program's Hockey East era.

Minnesota took one of the goals back just before the intermission. Ryan Johnson's initial one-timer from Ben Meyers and Matthew Knies was denied by goaltender Matt Murray, but the puck deflected off a UMass skate and into the net 18:02 into the first.

Lebster opened the second period by putting the Minutemen back up by two with his second tally of the day at the 1:24 mark, collecting a loose puck from Kiefiuk and senior Anthony Del Gaizo and knocking it home at the post.

The Gophers made it a one-goal game once more with the second period winding down. Tristan Broz's deflected in a puck at the net front from Jaxon Nelson and Rhett Pitlick at 17:09, bringing the score to 3-2.

Minnesota then converted on the power play in the third period to tie the score at 3-3 as Matthew Knies picked off a UMass clearing attempt and fired a shot past Murray 13:17 into the frame.

Meyers later came up with the winner 8:31 into overtime for the Golden Gophers, connecting on a one-timer from Aaron Huglen and Nelson from point-blank range.

Minnesota edged the Minutemen in shots 24-23, while UMass went 1-for-1 on the power play and the Golden Gophers were 1-for-2.

Murray finished with 20 saves on the day, and Close also made 20 stops for Minnesota.