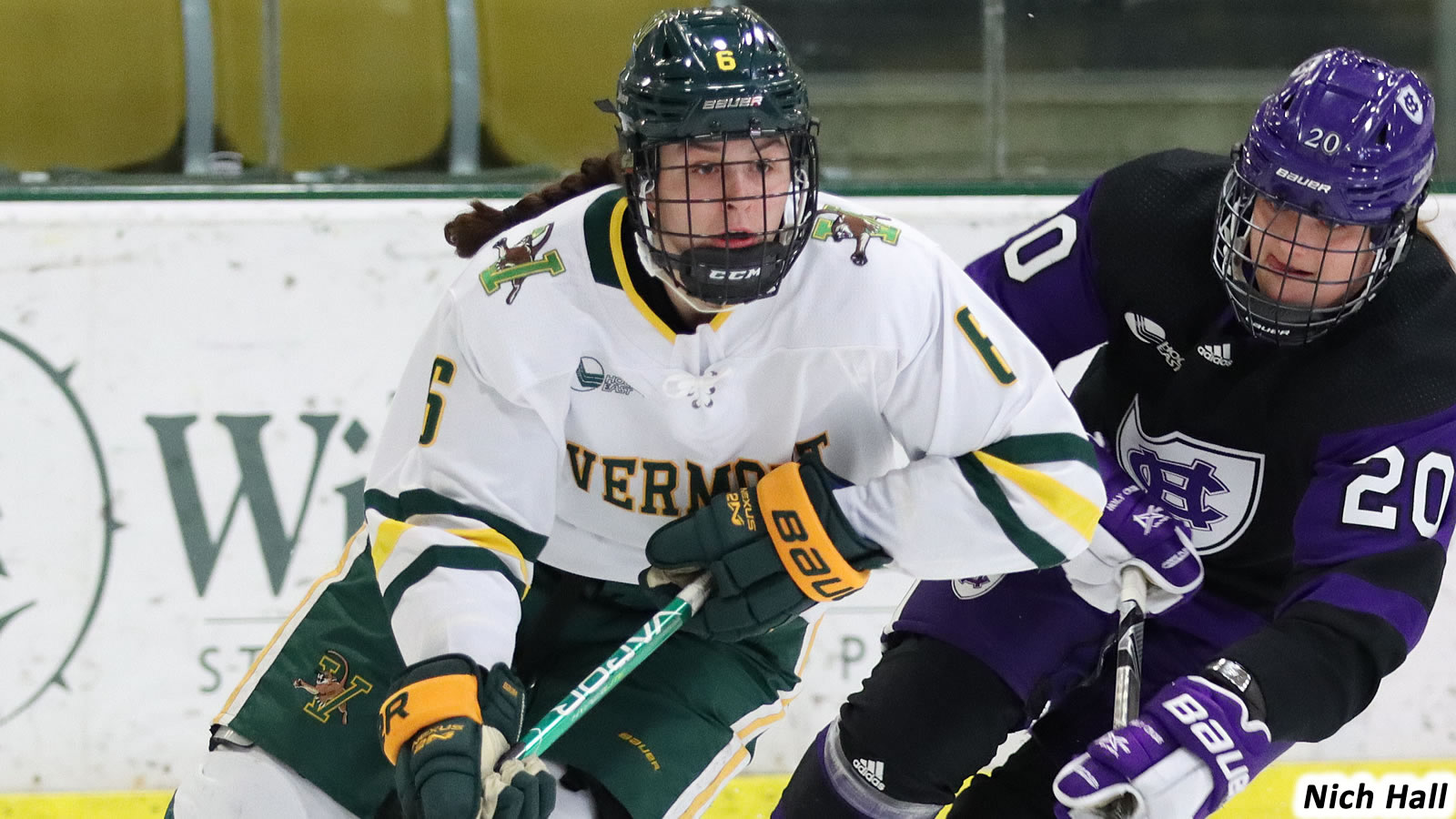 "Good first win for our team and there were really a lot of positives as we get started on the season," Head Coach Jim Plumer said. "We had some excellent flashes in the offensive zone and finished some great chances. Great game for Evelyne Blais-Savoie and for Hailey Burns to get us going and I am excited to see us improve from game-to-game."

- The Catamounts opened the scoring 8:13 into the first period off a faceoff win. Tynka Pátková won the puck straight back to Hailey Burns and she one-timed a low shot past RIT's Sarah Coe for UVM's first goal of the season.

- Vermont doubled its advantage 5:47 into the middle frame with an excellent exhibition of passing. On a three-on-one rush Corinne McCool passed to Natalie Mlýnková in the middle of the slot. Mlýnková passed over to Theresa Schafzahl who cut in on the Coe and beat her with a backhand for her first goal of the season.

- Mlýnková struck on a five-on-three power play with 10:02 left in the period to make it 3-0 for the Catamounts. Schafzahl fed Mlýnková in the slot and her shot fake fooled a defender before she wired a wrist shot through Coe. McCool earned the second assist on the power play tally.

- Evelyne Blais-Savoie one-timed a feed from Burns 43 seconds later, again on the power play to make it 4-0. Bella Parento also earned an assist on the tally.

- The Tigers got one back on the power play with eight seconds left in the middle frame. Chloe McNeil snuck a backhand past Jessie McPherson for her first goal of the season.

- 14:09 into the final frame Blais-Savoie struck again to put the game out of reach. In transition, Lily Humphrey skated towards the two RIT defenders before deftly dropping the puck to Blais-Savoie. Blais-Savoie cut into the slot and fired a shot just under Coe's glove for her first career two-goal game.

- RIT's Chloe McNeil did get one more goal back for the Tigers with 4:39 to play.

- Evelyne Blais-Savoie led the way for the Catamounts with two goals and a game-high five shots on net.

- With her goal and assist tonight Theresa Schafzahl is now just three points away from tying Amanda Pelkey (2011-15) with 105 career points, the most by a Catamount. Schafzahl also currently has 51 career assists, and needs five more to tie Pelkey's career mark for assists.

Saturday afternoon the teams will battle again at 2 p.m. Saturday will be Poster Day presented by UVM Print & Mail. The Catamounts will sign posters in the Gutterson lobby following the game.