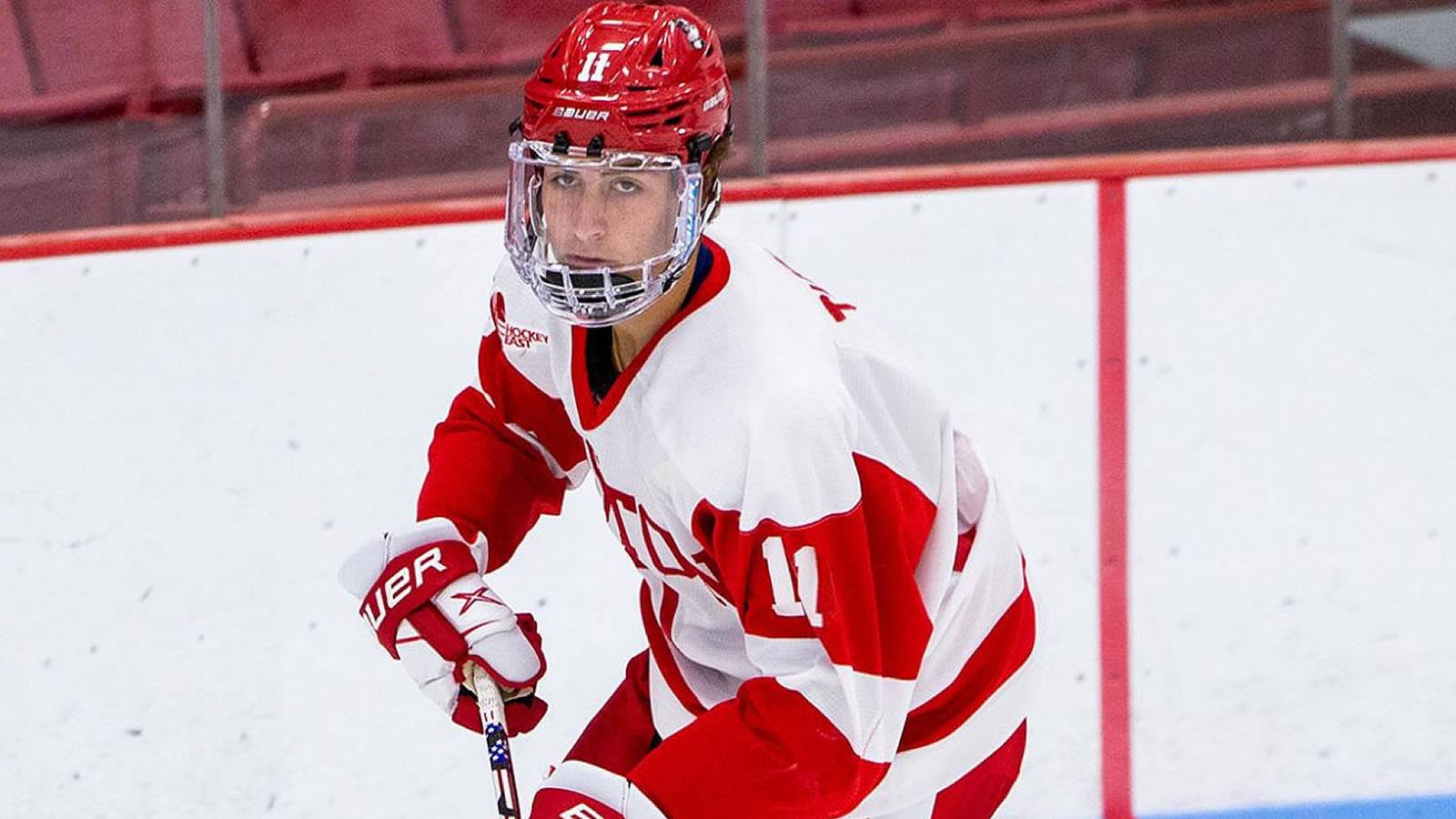 BU held a 3-0 lead after seven minutes and never looked back, eventually pushing the lead to 4-1 after 20 minutes. The Terriers then added two goals in each of the final two frames to complete the victory in head coach Jay Pandolfo's first game in charge of the BU bench.

Four freshmen in total found the back of the net on Saturday, as Devin Kaplan and Quinn Hutson joined Greene and Wilmer in lighting the lamp. Greene scored two goals and added one assist while Lane Hutson recorded three assists and Wilmer totaled one goal and two helpers. Quinn Hutson, Kaplan and junior Luke Tuch each secured one goal and one assist as six Terriers notched multiple points.

Seniors Sam Stevens and Matt Brown both lit the lamp, two of the seven different Terriers to score on Saturday. In total, 15 different BU skaters secured at least one point in the win.

Junior goaltender Drew Commesso was sharp, making 22 saves and helping to hold Bentley to an 0-for-6 mark on the power play.

- Quinn Hutson opened the scoring just 2:34 into the proceedings when he knocked home a rebound off a shot from sophomore Ty Gallagher.

- Brown pushed the lead to 2-0 at the 4:00 mark. Junior Dylan Peterson took a hit to make a play and get the puck out of the zone. Brown flew by a Falcon defender and got to the puck first before skating freely into the right circle and uncorking a shot past Nicholas Grabko.

- Greene's first of two straight markers in the opening period came just 3:00 after Brown's goal when he potted a rebound on the power play, while his second strike was a nifty backhander from the left circle.

- Bentley got within three with a goal in the final minute of the first period, but Wilmer made it 5-1 just 4:54 into the second stanza when he collected a pass from Greene and roofed a shot short side into the top left corner.

- Harrison Scott scored to cut the deficit to 5-2 late in the second, but Tuch made sure BU took a four-goal lead into the intermission. Lane Hutson faked out a defender in the offensive end and then zipped a pass across the zone to Tuch in the right circle for a blistering one-timer.

- Kaplan collected his first goal at 1:14 of the third period to extend the lead to 7-2. Fensore gathered the puck along the right half-wall and fired a pass across the zone to Kaplan at the left post for a one-timer.

- Stevens closed the scoring at 3:52 of the third when Zabaneh outmuscled a Bentley defender for a loose puck in the right corner and got it over to Stevens for the finish.

- Five of the six Terrier blue liners recorded at least one assist.

- All four of Greene's classmates that skated tonight assisted on one of his goals.

- The five freshmen combined for five goals and eight assists.

- The Terriers went 2-for-7 on the power play in addition to their perfect 6-for-6 mark on the penalty kill.

- The Terriers will host Waterloo in an exhibition next Saturday at Agganis.