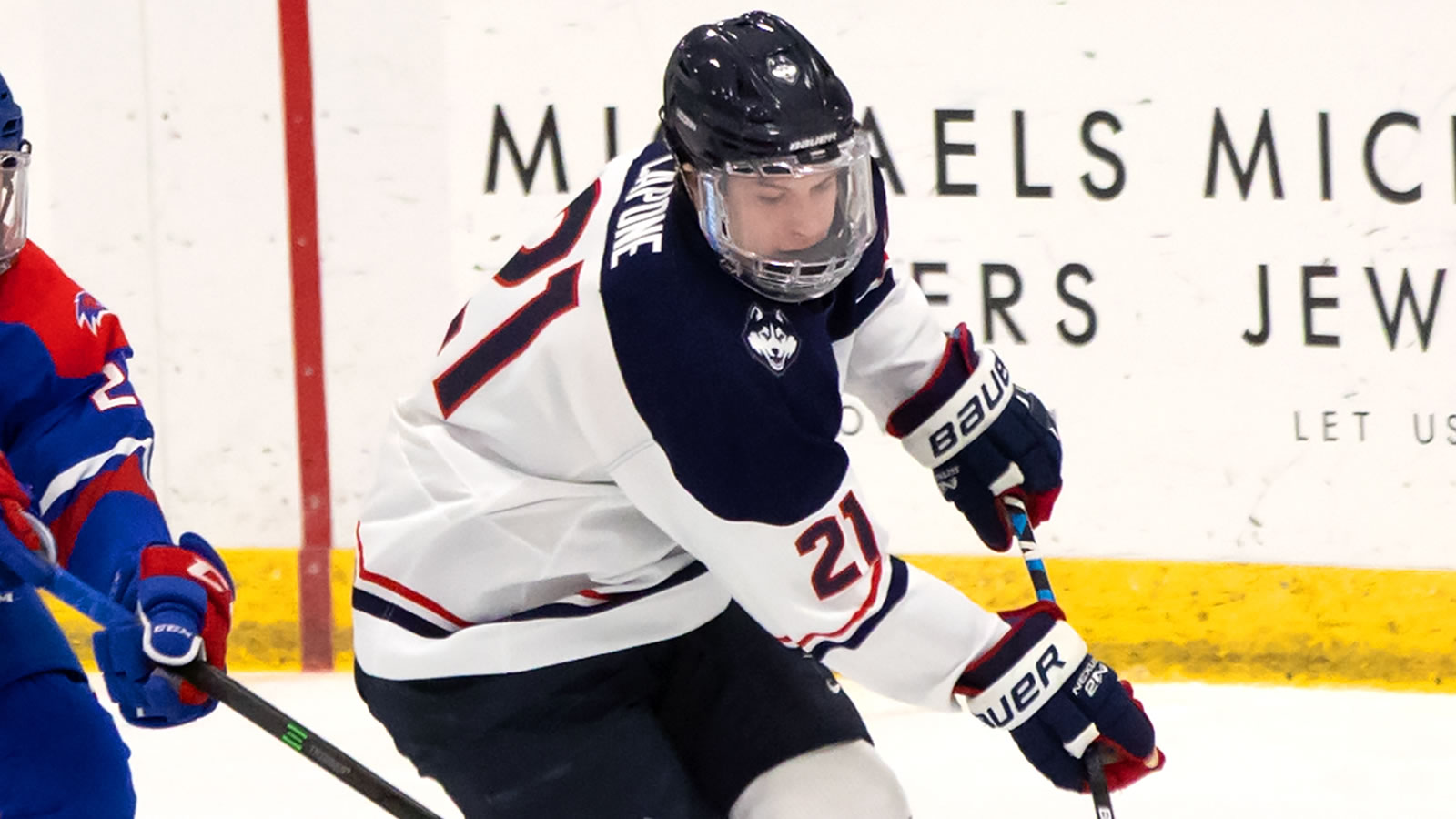 Burlington, VT. - The University of Connecticut men's hockey team scored two power play goals, and two goals in the third period Saturday night to open the 2022-23 season with a victory.

From the first puck drop, both teams had energy and were playing fast. Vermont would get the first chances of the game as a penalty by Justin Pearson would for the Huskies to play a man down. UConn's defense and sophomore goaltender Logan Terness would stand strong and prevent any chance of a Catamount power play goal. A Vermont tripping penalty would put the Huskies on the power play with the chance to get on the board first. UConn had a couple opportunities but saves by Vermont goaltender Gabe Carriere kept the game scoreless.

UConn would head back on the powerplay at 13:05 as Joel Matta would head to the penalty box for cross checking. The Huskies would fire pucks on net however Vermont's defense would remain strong killing off the penalty. Immediately following the penalty kill Joel Maatta would head to the box for a third time, giving UConn another opportunity. The Huskies would not let this opportunity go to waste as freshman Matthew Wood would take the cross ice pass from junior Andrew Lucas, and fire one home to give UConn the 1-0 lead late in the period. Following the UConn goal, an odd man rush following a UConn turnover would cost the Huskies as William Lemay of the Catamounts would tie the game at one.

Both teams would pick up right where they left off, playing aggressive and pushing the puck up ice. Once again UConn would look to capitalize off a Vermont penalty. One minute into the power play, Andrew Lucas would fire the puck to sophomore Ryan Tverberg who without hesitation would fire the puck right past the goaltender to give UConn the 2-1 lead early in the period. The Huskies defense would continue to impress, breaking up numerous odd man attacks and preventing Vermont from evening up the score. Vermont's best chance of the period came while on the power play late in the second period as a turnover in the Huskies defensive zone fell right to a Vermont Skater but was then broken up by senior Captain Roman Kinal. With time running down in the period, Vermont would have a three on two rush, however Kinal would put his body on the line and block the shot attempt keeping the lead intact heading into the break.

Following the second period, Andrew Lucas has two assists, and UConn as a team has 21 shots on goal to Vermont's 10.

UConn would start the third period strong and never look back. The Huskies would extend their lead as a shot by freshman Tristan Fraser would trickle right past the goaltender and give the freshman his first career goal. Immediately following the goal, the Huskies would win the faceoff, and sophomore Nick Capone would fire home the one timer to give UConn the 4-1 lead early in the period. With a three-goal lead, UConn's defense would continue to assert their dominance as they would limit Vermont to only six shots on goal in the period.

Sophomore goaltender Logan Terness would finish the night with 15 saves and his first career win, while transfer Andrew Lucas would finish with two assists.

UConn will finish the two-game series against Vermont, Sunday October 2, with puck drop scheduled for 4:05pm. The game can be streamed on ESPN+.