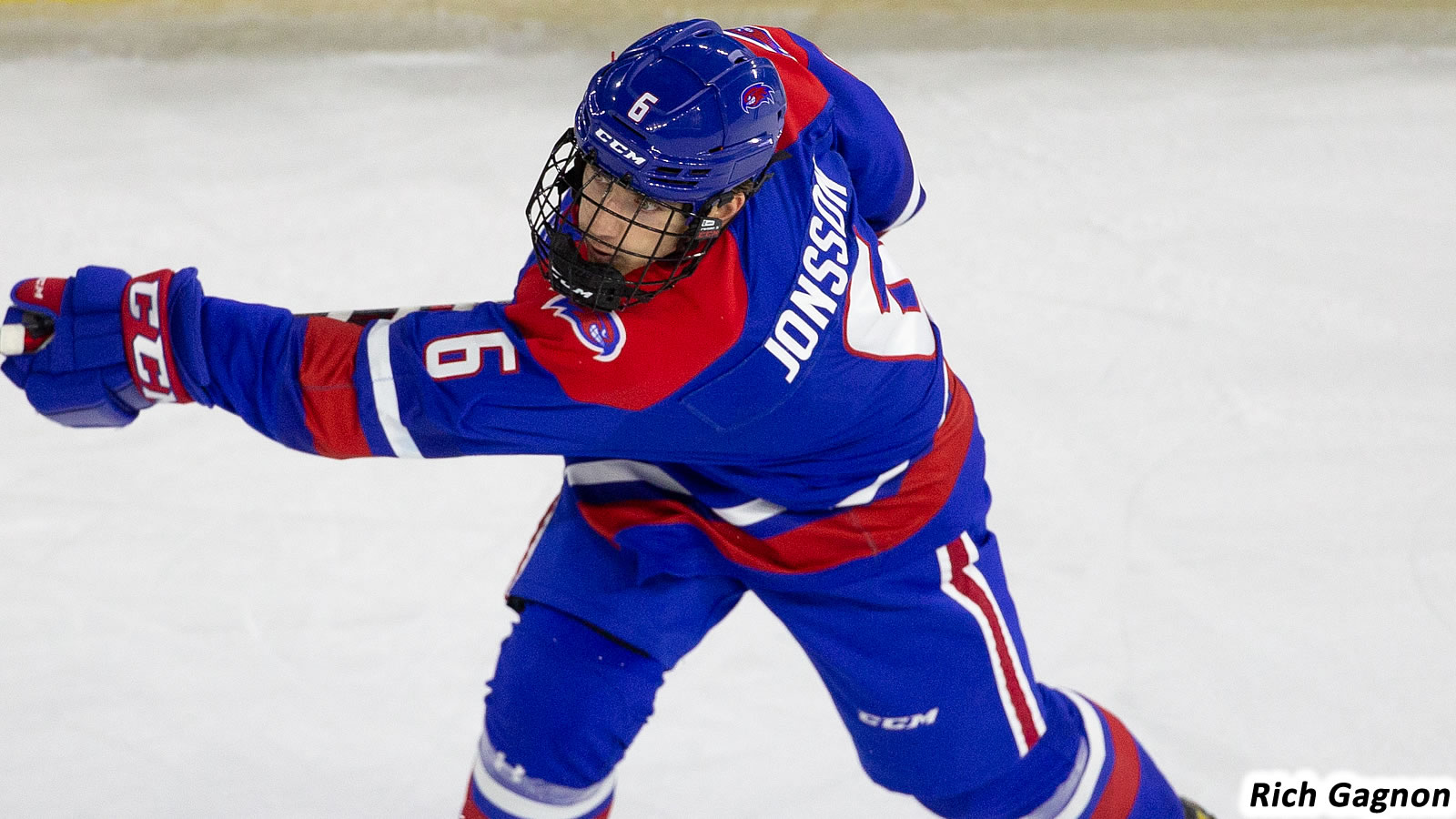 "We knew tonight was going to be a challenge. We faced an excellent opponent, and we were the benefactors of a quick start. We learned a great deal about our team, and everyone knows we have plenty to work on," said Head Coach Norm Bazin following the game.

Graduate student Gustavs Davis Grigals (Riga, Latvia) backstopped the team to victory with 27 saves in his River Hawk debut to pick up the shutout. With his clean sheet, Grigals becomes just the second goaltender in program history to record a shutout in his first appearance.

Freshman Scout Truman (Lethbridge, Ontario) added to the night of firsts with an assist on Kaiser's power play tally to pick up his first point as a River Hawk. The rookie forward also finished the night with a +2 rating.

"I was pleased with the urgency the guys displayed in the faceoff circle and in terms of shot-blocking. Our goaltending proved the difference early. We'll take Sunday off and get back to work with some valuable game footage to develop from," remarked Bazin.

After stifling an early St. Lawrence power play opportunity, UMass Lowell quickly turned up the heat with an aggressive offensive push that kept possession deep in the zone. Saints' netminder Emil Zetterquist kept the River Hawks at bay through an early flurry of shots until a hooking penalty put UMass Lowell on the power play.

Unable to capitalize on the extra-man chance, both teams reset as St. Lawrence returned to full strength. Jonsson, seeing an opportunity to keep the River Hawks on the attack, settled a clear attempt off the boards and fired a centering shot towards Meehan in front of the net. Tipping the puck away from an advancing Saints skater, Chambers followed the deflection and redirected the shot past the glove of Zetterquist to put UMass Lowell up 1-0 just 8:31 into the action.

The momentum only increased after the opening tally from Chambers. Advancing up the ice, senior Marek Korencik (Zilina, Slovakia) dumped the puck into the zone as the River Hawks brought on fresh skaters. Senior Ryan Brushett (Montreal, Quebec) found the pass and tapped it to Berglund along the boards. The captain flexed his stickhandling as he dangled the puck around a group of defenders and flicked the puck into the back of the cage for the 2-0 lead.

A hooking call against St. Lawrence at 13:29 put the River Hawks back on the extra-man chance. As the seconds ticked down on the penalty clock, Korencik settled the play and connected with Truman at the top of the circle. The freshman hit a quick shot to Crasa along the goal line, who reacted with a timely look towards Kaiser. Capitalizing on crisp passing, Kaiser knocked in the wrist shot towards the far side of the net to lock in the 3-0 margin heading into the first intermission.

A quiet second frame kept the score in favor of the River Hawks as the teams entered the final 20 minutes. The UMass Lowell penalty kill unit went to work to keep the Saints off the board, shutting down all three St. Lawrence power plays in the third to stay perfect in their first game of the year.

With time winding down, the Saints looked for an offensive edge and pulled Zetterquist in favor of the extra skater. St. Lawrence attempted to steer the puck up the ice, but a physical battle for the puck between Kaiser and Saints' Josh Boyer knocked it loose and onto the stick of Jonsson. The sophomore ripped the shot towards the unmanned cage to ultimately secure the 4-0 win to kick off the season.

The team wraps up its three-game homestand next weekend, Oct. 7-8, when it hosts Miami University. Puck drop for Friday night's tilt is slated for 7:15 p.m.