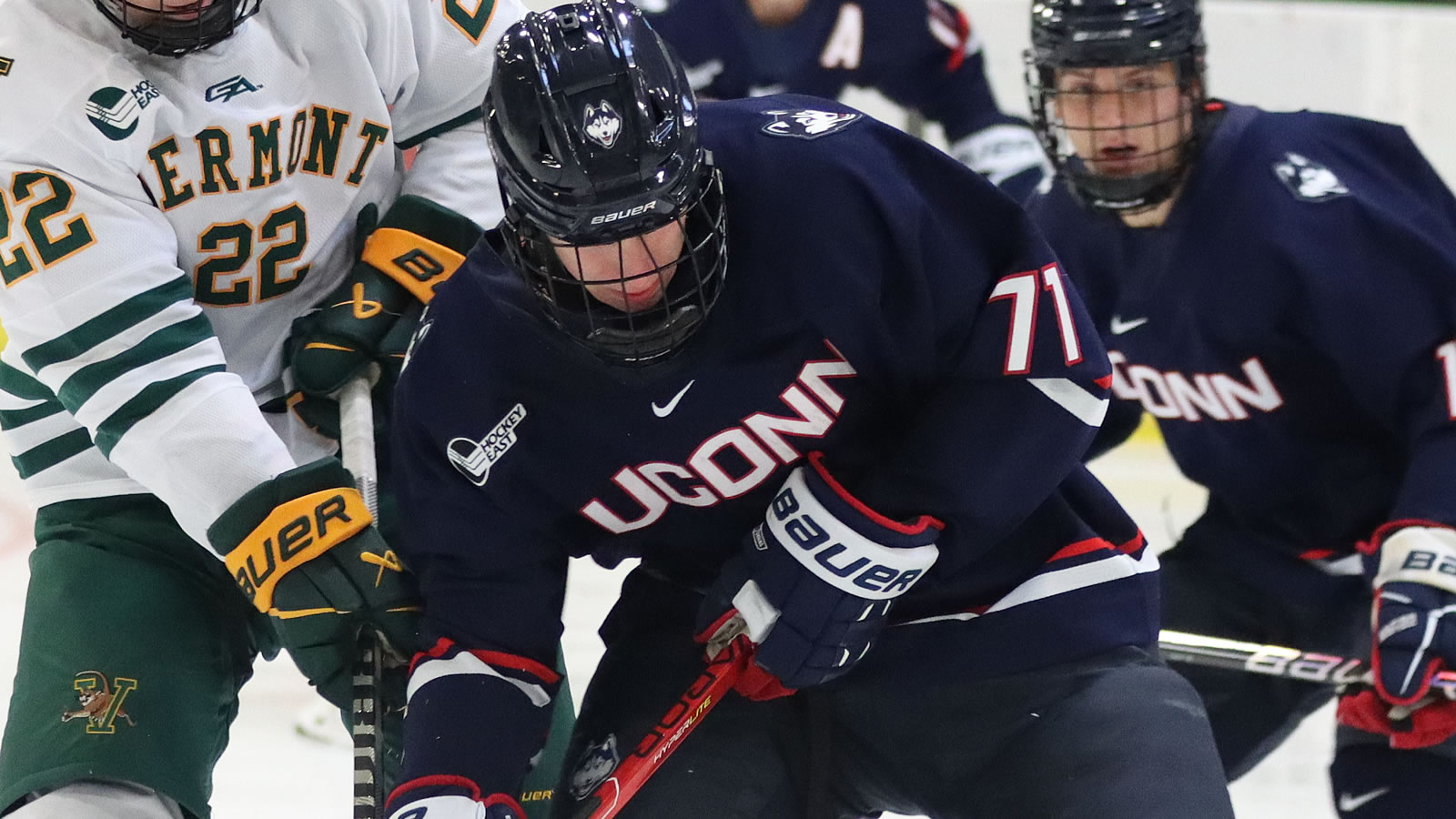 BURLINGTON, VT. - The University of Connecticut men's hockey team used a two goal second period to take home the victory over Vermont Sunday afternoon. With the win, the Huskies move to 2-0 on the season.

On the second leg of back to back games, neither team showed signs of being tied. UConn would look to go on the attack early as they would throw pucks in deep and look to use their speed to beat Vermont. UConn's best chance of the period came with time running down in the power play as a shot by the Huskies would hit the pipe and trickle across the goal line before being cleared away by the Catamounts defense.

The Huskies defense was on full display as freshman goaltender Arsenii Sergeev would make 11 saves in the period including one sprawling leg kick save to prevent a power play goal for Vermont. The Catamount's best chance came late in the period when Sergeev was caught out of position leaving the net wide open. Sophomore Ryan Tverberg would put his body on the line diving across the ice to block the shot and keep the game scoreless heading into the period break.

UConn's offense would not remain silent for long, as they would start the second period overwhelming the Catamount's defense. UConn's speed and strength would cause problems for Vermont as they would head to the penalty box three times in the second period. UConn's offense wouldn't have to wait long for a goal as Matthew Wood would take a pass from transfer Andrew Lucas and fire a shot right past the goaltender for the power play goal. The Huskies would not let up, as they would continue to pressure Vermont in their defensive zone. Following a Vermont turnover, Nick Capone would pass the puck right to Chase Bradley who was in perfect position to deflect it home for the goal. UConn's defense would hold Vermont to only five shots on goal in the period.

UConn would continue to build off the momentum gained from the second period. Shortly into the third period, transfer Ty Amonte would take the puck behind the net and go for the wrap around, after being denied once, Amonte would force it home to give UConn the three goal lead. Late in the third period Vermont would get on the board off a one-timer to cut the Huskies lead to two. The Huskies would only allow one goal as they would come away with a 3-1 victory and the weekend sweep over the Catamounts.

The Huskies will return home and begin prepping for their home opener against Union College on October 7 and 8.