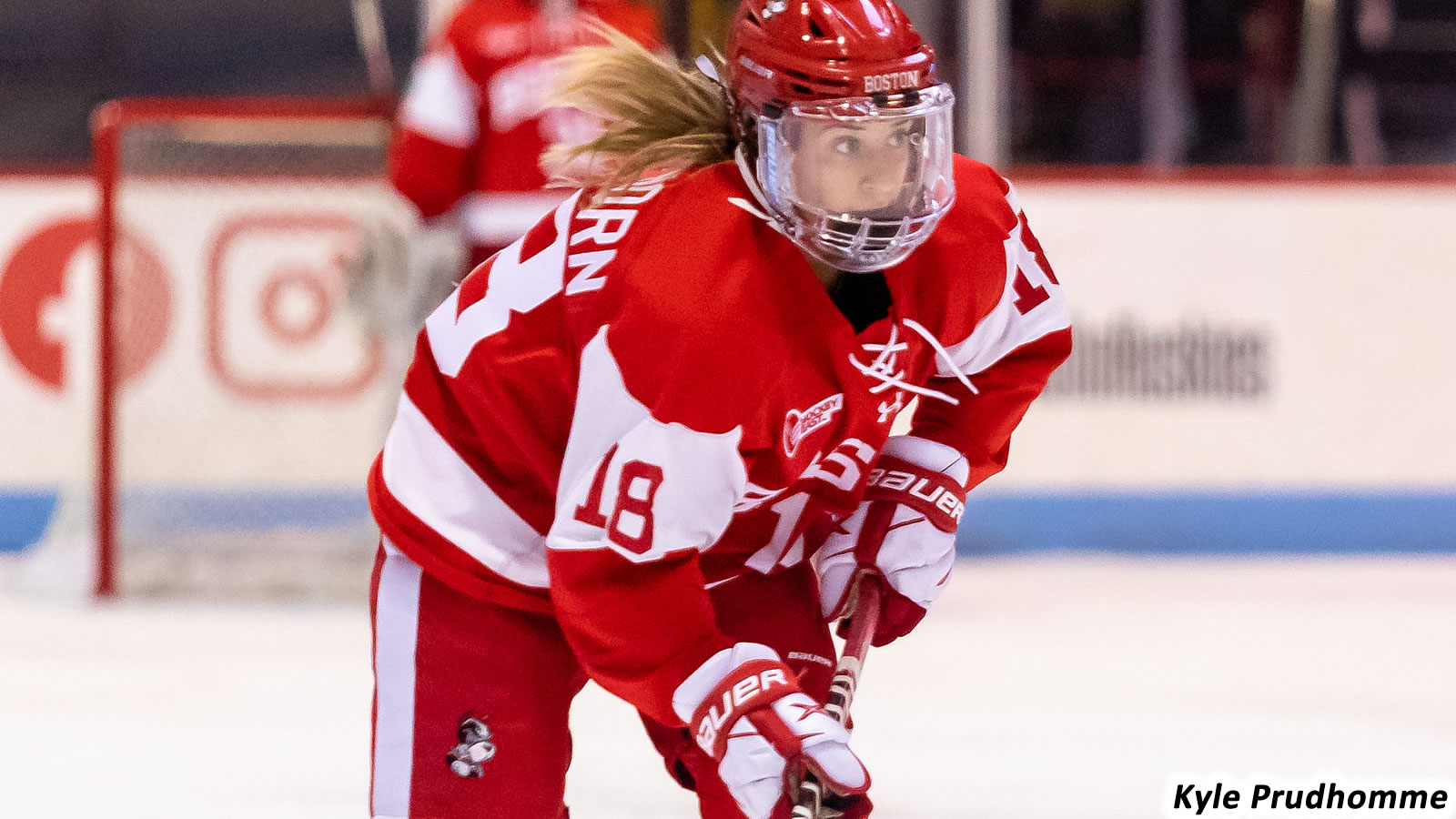 BOSTON, Mass. - Senior Haylee Blinkhorn broke a 2-2 tie with her first two goals of the season to help the Boston University women's ice hockey team earn a 5-2 victory and complete a weekend sweep of No. 12 UConn on Saturday afternoon at Walter Brown Arena.

The Terriers never trailed in the contest as the Huskies erased deficits of 1-0 and 2-1 before Blinkhorn provided the game-winner late in the second and then added an insurance goal late in regulation.

BU now owns a three-game win streak - all against ranked opponents - and will enter Thanksgiving week with an overall record of 6-8-0 and a Hockey East mark of 5-7-0.

- After killing off an early UConn power play, the Terriers were able to get on the board first at 13:21 of the opening stanza.

- Freshman Clara Yuhn found sophomore Christina Vote off a rush and after Vote's shot was blocked, Yuhn's rebound attempt was saved, but junior Catherine Foulem was at the crease to send it home for her third goal of the year.

- Just over a minute later, UConn found an equalizer when Kathryn Stockdale netted the puck to tie it up, 1-1.

- After coming up empty on their first two power-play chances, the Terriers used a third player advantage to regain the lead midway through regulation.

- A center-point shot by senior captain Nadia Mattivi made its way through traffic for her third goal of the season off assists from classmate Julia Nearis and junior Lacey Martin.

- UConn once again tied things up just over seven minutes later with a goal from Kate Thurman.

- The second deadlock did not last long, however, as junior Andi Calderone moved the puck up the ice quickly and used a quick turn to leave the puck for Blinkhorn at the top of the right circle, where the senior sent home a snap-shot to record the game-winner with her first goal of the season.

- In the third period, UConn had a 5-on-3 power-play chance but goaltender Callie Shanahan and the Terriers were able to get back to full strength unscathed.

- BU continued to put pressure on UConn and at 16:37 in the third, Blinkhorn lit the lamp for the second time when she knocked in a loose puck crease to go up 4-2.

- UConn pulled their goalie to add an extra skater and Nearis put the finishing touches on the win when she scored on the empty net from her own blue line.

- Shanahan saved 25 of the 27 shots she faced to earn her second consecutive win.

- Twelve Terriers recorded at least one point in the victory.

- The Terriers had nine blocked shots to UConn's eight.

- Foulem lit the lamp for the Terriers for the second consecutive home game.

- This was the final contest in a stretch of 12 straight Hockey East games for the Terriers.

- The Terriers will return to action on Friday (Nov. 25) when they head to Las Vegas to take on No. 6 Yale in the opening round of the Henderson College Hockey Showcase.

- This will be the longest trip in program history, topping the journey to Vail, Colo., nine seasons ago.