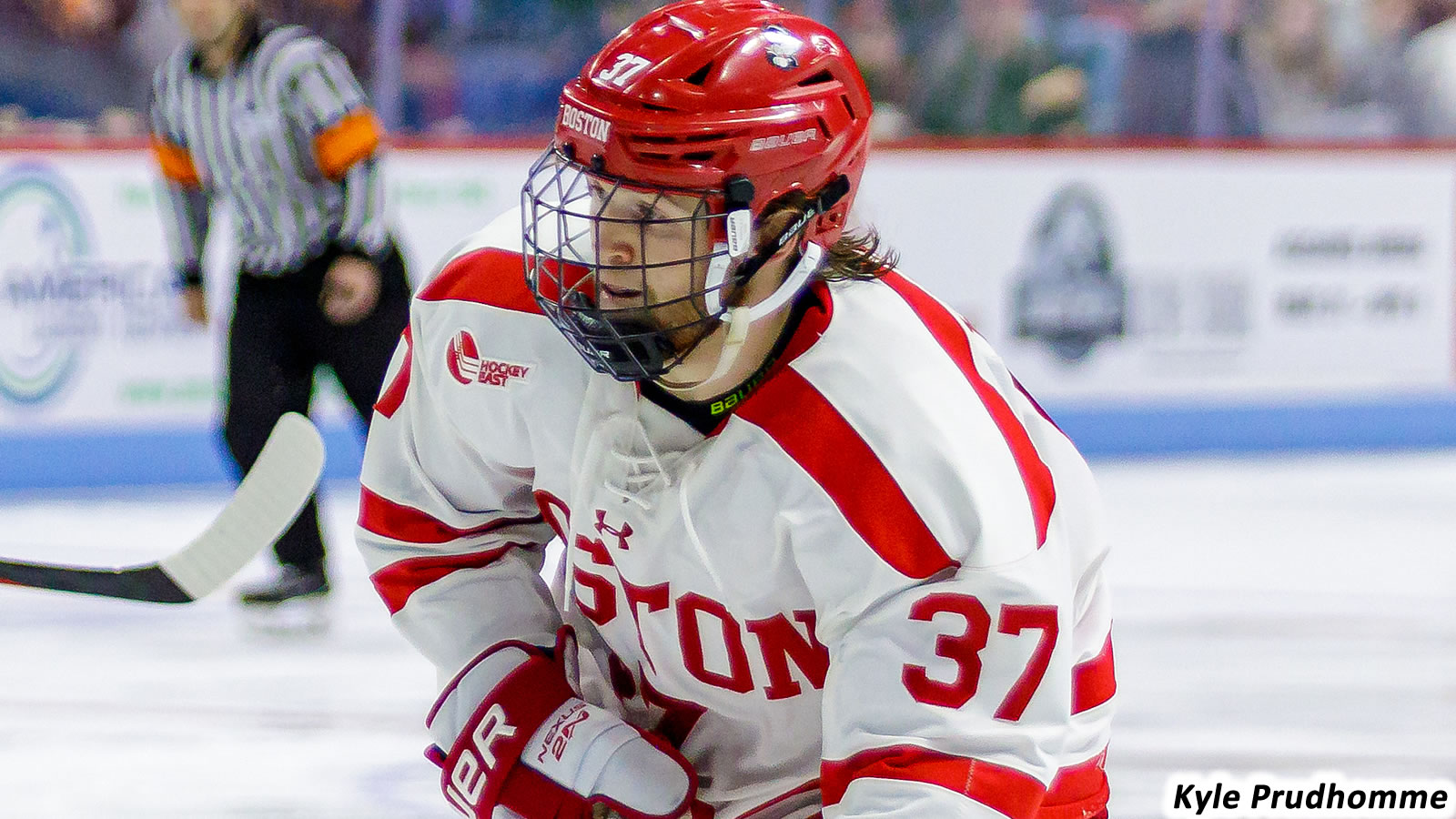 BU (8-4-0) won its second straight game thanks to three third-period goals, with both Hutson and Brown lighting the lamp in the final frame. Brown assisted on both of Hutson's goals, providing the primary helper on the rookie's opening salvo before earning an assist on Hutson's strike just 35 seconds into the third period which put BU up, 3-1.

Sophomore Ty Gallagher had a pair of primary assists, setting up goals by seniors Domenick Fensore and Sam Stevens. Seniors Case McCarthy, Jay O'Brien and Wilmer Skoog each recorded an assist, as did junior Luke Tuch and freshman Jeremy Wilmer.

Junior Drew Commesso made 26 saves to improve to 6-2-0 on the season. The best save of the night was by a defenseman, however, as junior Cade Webber dove into the crease and knocked away a loose puck before a Notre Dame skater could poke it past Commesso.

- BU took a 1-0 lead just 9:34 into the proceedings. McCarthy gathered the puck in the defensive end and dished it to Hutson, who gained the blue line and passed it to Brown. Hutson continued towards the goal and deftly redirected Brown's shot past Ryan Bischel (38 saves).

- The Irish tied it at 16:23 of the first to send the teams to the intermission on level terms.

- Fensore regained the Terriers' lead at 7:49 of the second stanza with a shot from the half-wall that caught Bischel off guard. The puck slipped past the unsuspecting netminder for Fensore's third goal of the campaign.

- Hutson's second goal of the night gave the Terriers a 3-1 lead only 35 seconds into the final frame.

- With the teams skating 4-on-4, Hutson got the puck at the right point and skated around the top of the zone until he got to the bottom of the right circle. From there, he set up Skoog for a one-timer in the slot that was blocked. The rebound popped right to Hutson behind the net, however, and he circled around the cage before lifting the pack past Bischel.

- The Irish cut the deficit to one at 3-2 at the 4:36 mark, but Brown struck on the power play exactly four minutes later to reestablish the Terriers' two-goal cushion.

- A terrific redirection by Stevens off a Gallagher shot closed the scoring with 9:20 remaining in regulation.

- The Terriers outshot the Irish, 43-28, marking the fourth time in the last five games that they have generated over 40 shots on goal.

- Hutson now has three game-winning goals this season, including each of the last two.

- This was Brown's fifth multi-point effort of the season.

- Fensore has found the back of the net in two straight tilts while Wilmer has secured an assist in two consecutive contests.

- Commesso owns a .949 save percentage at home this season.

BU will welcome the U.S. National Under-18 Team to Agganis on Saturday for an exhibition contest. Puck drop is scheduled for 2 p.m.