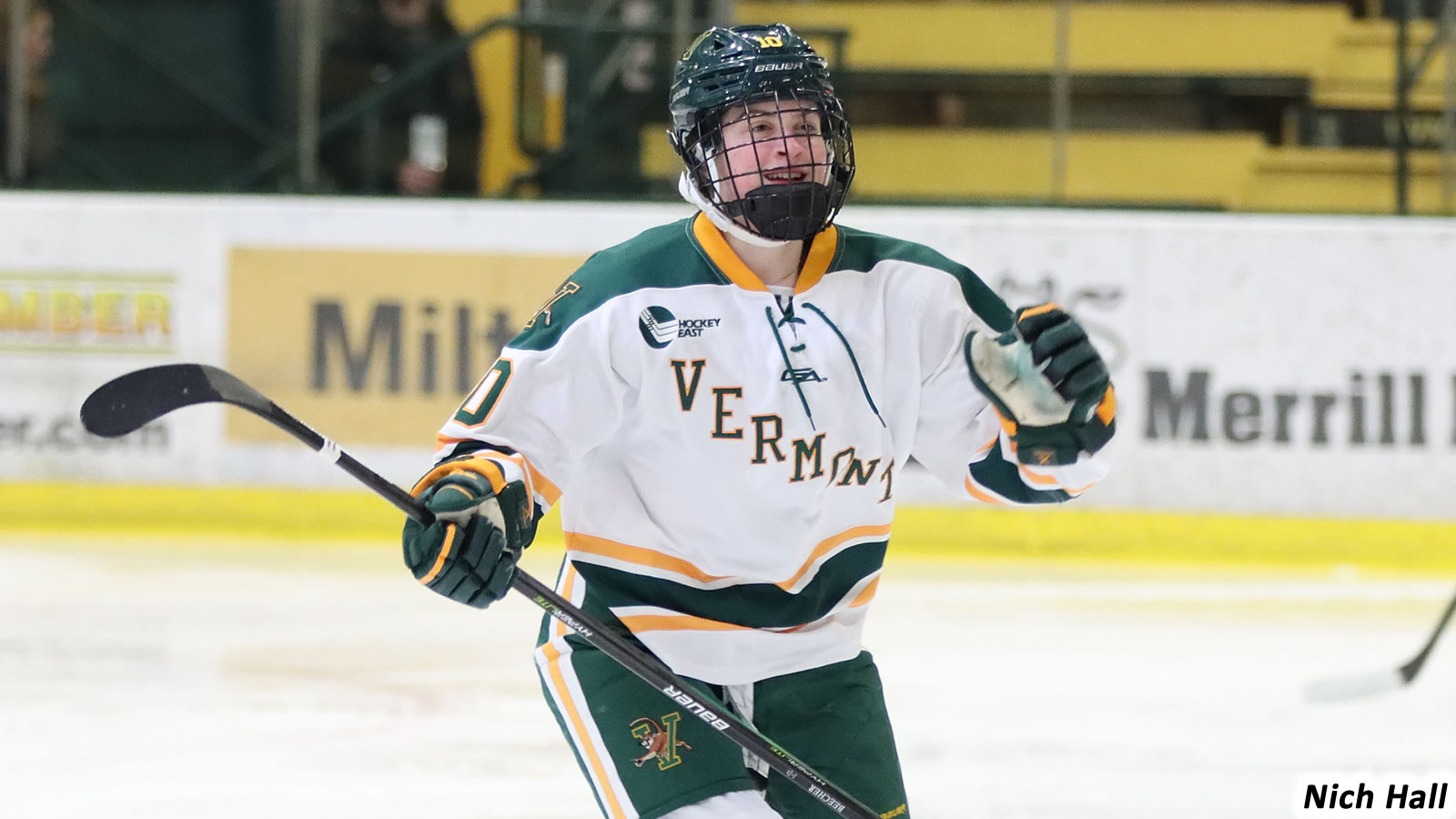 BURLINGTON, Vt. - First year forward Lara Beecher registered her first career two-goal game as the 13th ranked Catamounts defeated No. 9 Providence 2-0 Friday night in Hockey East action from Gutterson Fieldhouse. Jessie McPherson made 16 saves for the Catamounts as she tied the program record for wins with 32. With the win Vermont improves to 14-7-1 this season while the Friars fall to 16-6-1.

"I'm very pleased with the way we played tonight," Head Coach Jim Plumer said. "It started with fantastic defensive effort by our defensive corps and Jessie McPherson. We were relentlessly efficient on the forecheck and Lara Beecher took care of putting pucks in the net. It was great to get going again and we are mindful that this was just round of three against a very good Providence team and I expect tomorrow to be a battle."

- Vermont opened the scoring just 77 seconds into the contest with Beecher cashing in on her fifth goal of the season. In front of the Providence's Sandra Abstreiter Krista Parkkonen and Beecher had multiple rebound looks. On the fourth attempt Beecher found the back of the net for the icebreaker. Hailey Burns earned the secondary assist on the goal.

- The Catamounts outshot Providence 7-3 in the middle frame but neither team found the back of the net and the teams headed to the third with UVM up 1-0.

- Beecher doubled the Vermont advantage 1:36 into the final frame. From a sharp angle Beecher roofed a shot just under the bar for her second of the game. Evelyne Blais-Savoie and Lily Humphrey assisted on the tally.

- Lara Beecher's two-goal game was the first of her career. She has six goals this season leading all UVM first years, three of her goals have been game-winners.

- After earning three points with tonight's regulation win the Catamounts are two points behind Providence for second place in Hockey East.

The Catamounts and Friars will go at it again tomorrow evening at 5 p.m. from Gutterson Fieldhouse. Saturday will be Youth Day presented by Healthy Living. In the Indoor Track (adjacent to Gutterson Fieldhouse) there will be a face painter, lawn games, a dress like a Catamount station, arts and crafts and small giveaways from Healthy Living from 4-5:30 p.m. For kids 12 and younger admission is free. Following the game there will be a Post Game Skate with the Cats. All participants must wear a helmet. In addition, anyone who attends Saturday's women's basketball game at 1 p.m. will also receive free admission to catch the Catamounts and Friars.