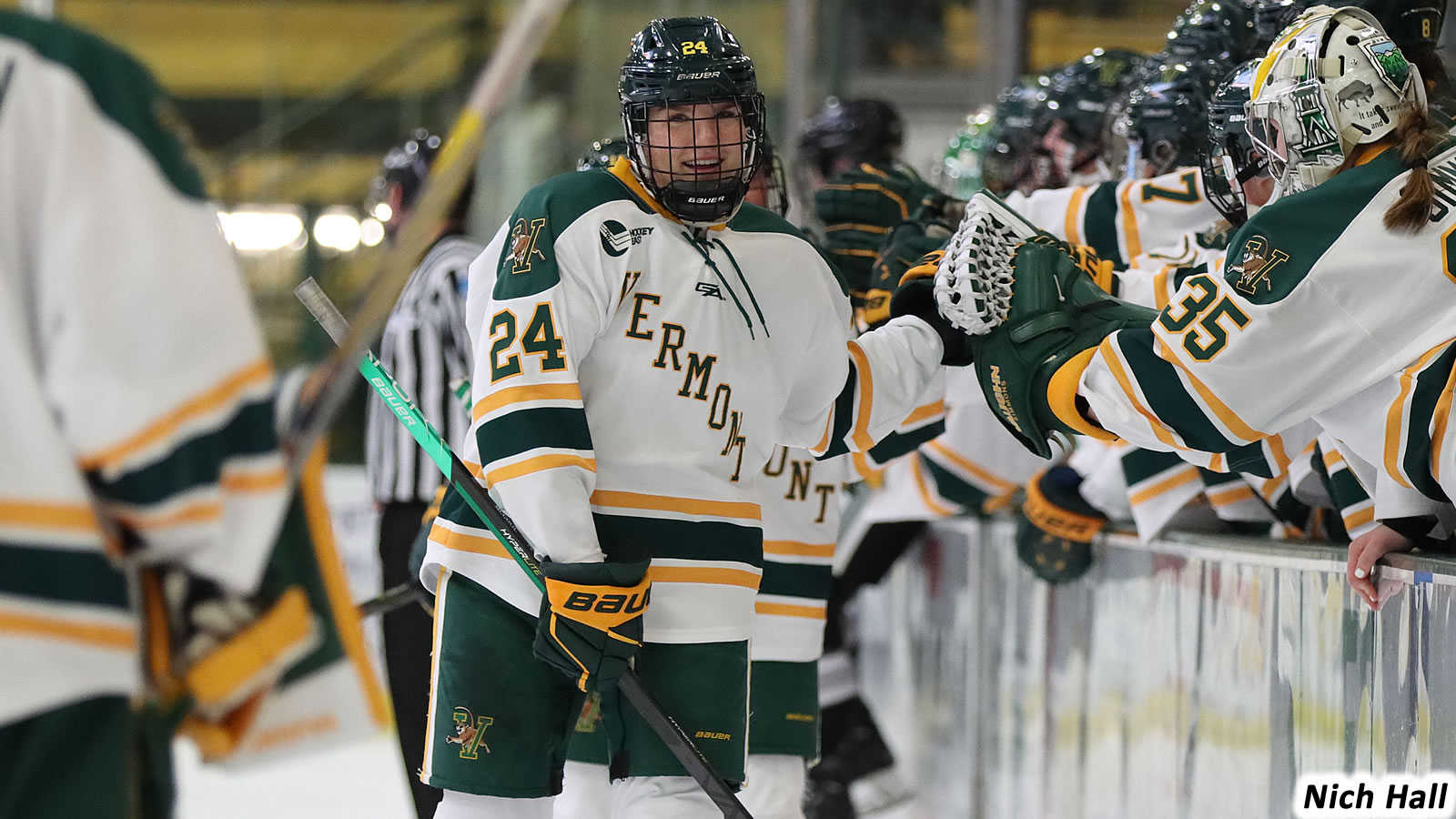 BURLINGTON, Vt. - 13th ranked Vermont scored three first periods goals on their way to a 4-1 win over No. 9 Providence Saturday evening in Hockey East action as the Catamounts swept the weekend series on Youth Day presented by Healthy Living. The win was junior goaltender Jessie McPherson's 33rd win as a Catamount setting a new program record. With the win Vermont improves to 15-7-1 this season while the Friars fall to 16-7-1.

"We couldn't have scripted a better start tonight and that really made it difficult for Providence," Head Coach Jim Plumer said. "This was no easy win by any means. Providence pushed us hard in the second half of the game and I am proud of this team's ability to weather some storms. Jessie McPherson stood tall this weekend and I am thrilled for her to break the record for most career wins, with a lot of games ahead in her career still. She's worked for it and she allows us to play with so much confidence. In the end, it was a total team win and now we have to get ready for round three with Providence next Friday night down there. I know it will be another battle."

- Natálie Mlýnková opened the scoring for the Catamounts 9:55 into the opening frame. In transition Corinne McCool from her knees passed over to Mlýnková in the slot and she ripped a shot past Providence's Sandra Abstreiter for her 14th goal of the season. Theresa Schafzahl earned the secondary assist on the play.

- Just 3:02 later the Catamounts top line struck again. On the forecheck Lilly Holmes forced a turnover behind the PC net and she fed a pass to McCool, wide open in front. McCool one-timed a tally past Abstreiter for her ninth goal of the year.

- With 3:32 to play in the first Lara Beecher scored her third goal of the weekend series to make it 3-0. Evelyne Blais-Savoie won an offensive zone faceoff back to Hailey Burns and she fired on net. The puck deflected off a PC defender and came right to Beecher who lifted it over Abstreiter for her seventh goal of the year.

- Hunter Barnett scored Providence's first goal of the weekend set with 5:33 to play in the middle frame. Ashley Clark fed a pass to Barnett in front of the net and she redirected it on net, McPherson made the initial save but Barnett tapped home the rebound for her fourth goal of the season.

- McPherson made eight saves for the Catamounts in the third period and graduate student Lilly Holmes iced the contest with an empty-net tally with 1:07 left in regulation.

- After earning three points with tonight's regulation win the Catamounts are now in second place in Hockey East with a one-point cushion on the Friars.

The Catamounts and Friars will face off again on Friday, January 13 at Schneider Arena in Providence. Puck drop is set for 7 p.m. in the final regular season meeting between the two teams.