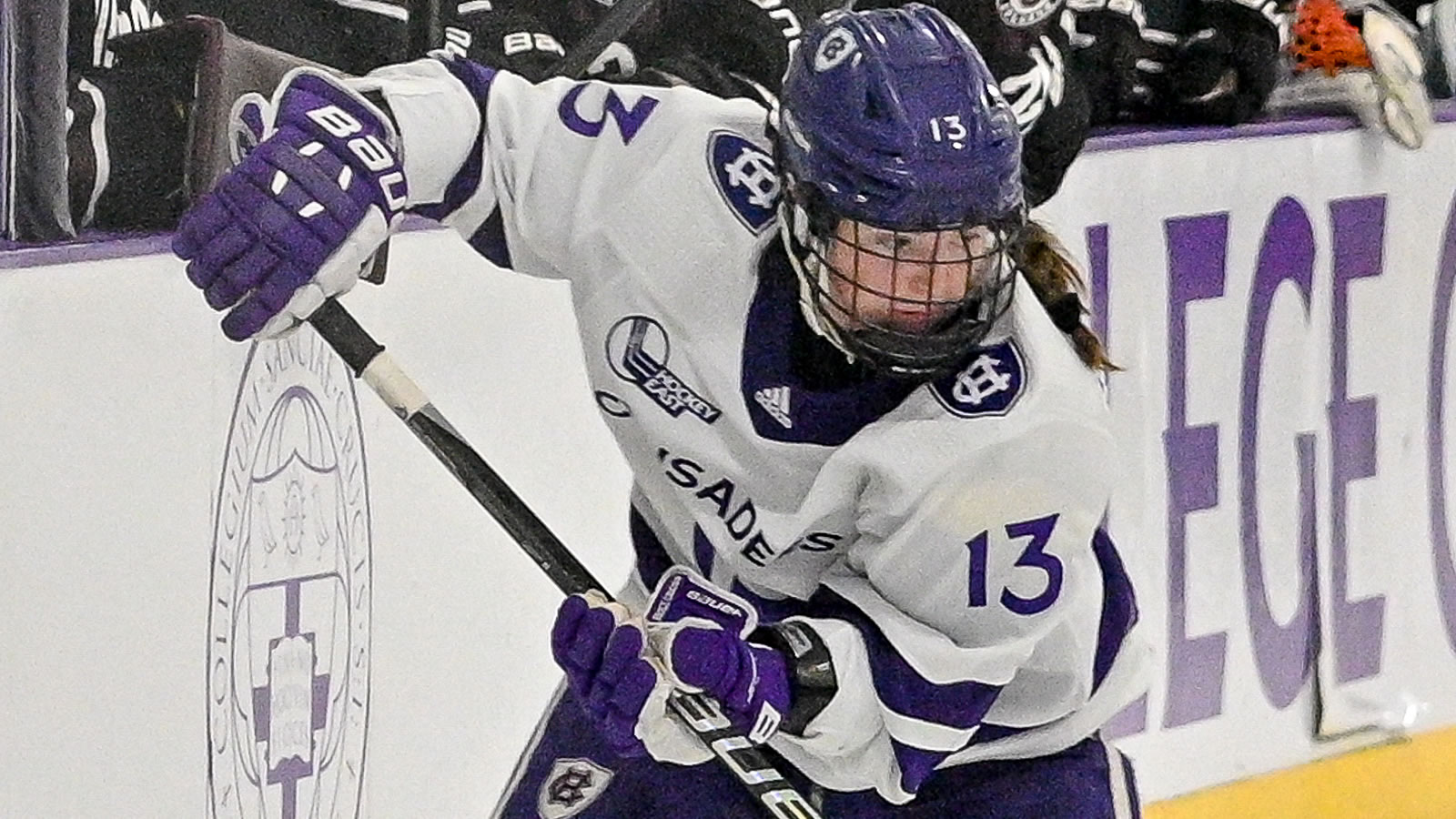 WORCESTER, Mass. - One week after Frozen Fenway, the Holy Cross women's ice hockey team took down Boston University for the second time this season. The Crusaders improve to 4-18-1 (3-14-0 Hockey East) while the Terriers fall to 7-15-0 overall and 6-12-0 in Hockey East play.

The Crusaders added another point towards the Turnpike Trophy rivalry, giving Holy Cross a 2-0 lead for the spring semester.

- The game started fast-paced and didn't slow as the game progressed. Both teams created opportunities up-front but were unable to convert. After the first period, shots on goal fell in favor of the Terriers, 10-8.

- Boston University drew their first penalty of the night for interference. The Crusaders took three shots on goal, all turned away by the Terriers' goalie, Andrea Brändli.

- The second period passed with strong play from both ends. The teams entered the locker room for second intermission, still scoreless.

- Early in the third period, Holy Cross drew their first penalty of the night. The Terriers only managed one shot on goal during their two-minute advantage.

- BU managed their second interference penalty at 10:22 in the third period.

- Senior Mary Edmonds won the faceoff and the Crusaders established their offense on the power play.

- Freshman Casey Borgiel fired a shot from the point that ricocheted off a Terrier defender. Senior Darci Johal collected the puck taking a shot from just outside the crease. Brändli made the save, sending the puck back into play. Edmonds secured the rebound and quickly dumped the puck in the net to give the Crusaders a 1-0 lead at 11:09 in the third period.

- The Terriers eagerly tried to find the equalizer and received an opportunity when Holy Cross drew a late penalty for hooking with 2:13 left in regulation. Brändli left the net, giving BU a 6-on-4 advantage.

- Boston University tied the game with a quick goal from Clare O'Leary. Following the goal, Holy Cross forced eight shots on goal before the clock hit zero to send the game to overtime.

- The Crusaders won the initial faceoff and wasted no time going for the win. Edmonds tapped the puck in the net 24 seconds into the extra period, securing the victory for Holy Cross. She was assisted by freshman Lane Lewis and senior Kailey Langefels.

- Edmonds continues to lead the Crusaders in points (11) and goals (7). She continues her point streak, tallying six points in her last five games.

- Borgiel, Johal and Langefels each add to their assist column, securing their fifth of the season. They hold the second highest assist total behind junior Millie Sirum (6).

- This is Holy Cross' first overtime victory of the season.

- Holy Cross will return on Saturday, Jan. 14 to face the Boston College Eagles at 6 p.m. in the Hart Center.