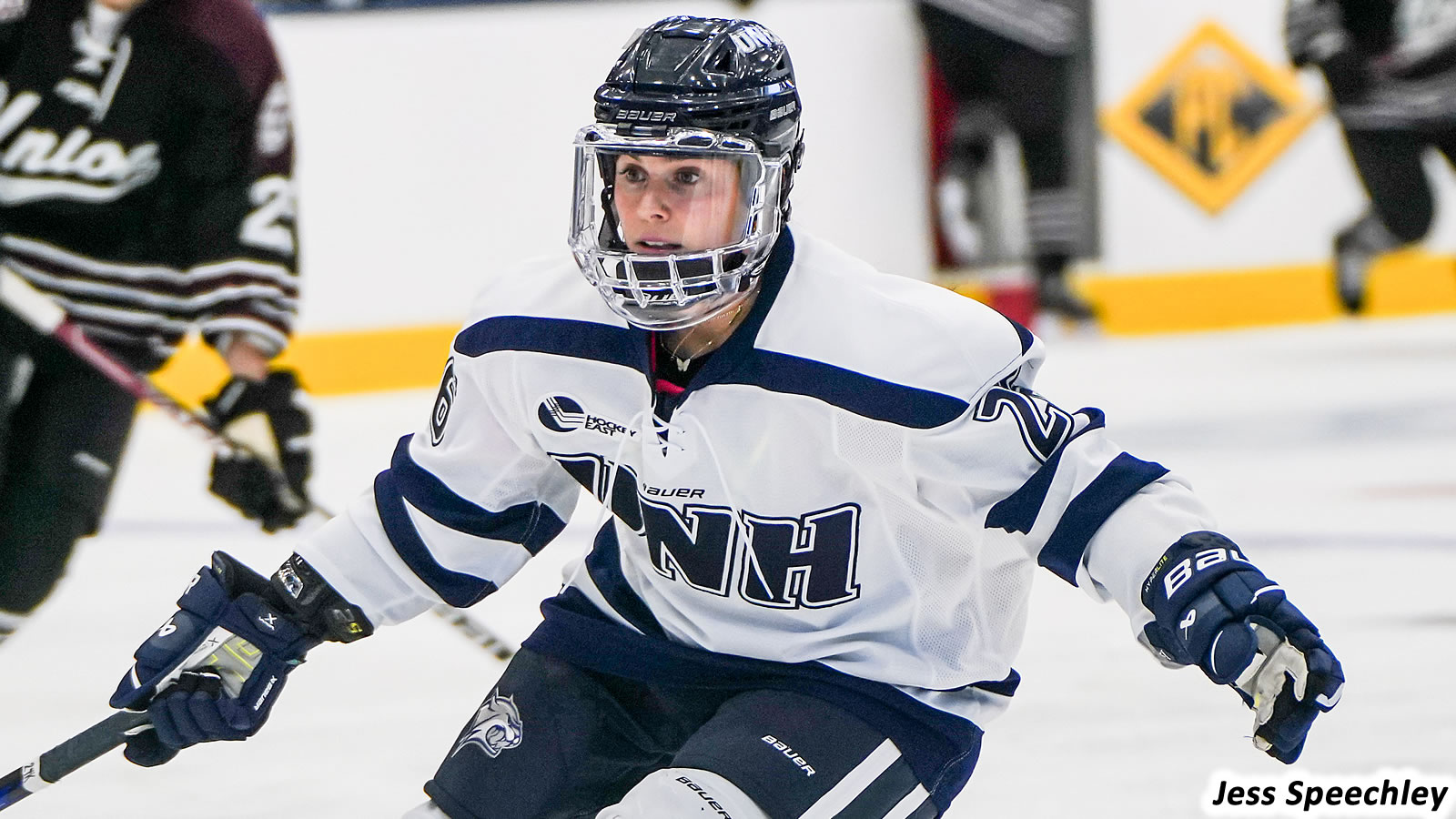 DURHAM, N.H. - In a back-and-forth game, graduate student forward Emily Pinto (Mulmur, Ontario) scored the game-winning goal with 79 seconds left in regulation to lift the University of New Hampshire to a 5-4 victory against the University of Maine at the Whittemore Center in Friday's Border Battle presented by Buffalo Wild Wings.

Senior goaltender Nicky Harnett (Plymouth, Minn.) made 12 of her 25 saves in the second period. Maine goalie Brooklyn Oakes stopped 25 shots, including 10 in the final frame and the Black Bears had four different goal scorers.

- Then on Saturday, Jan. 21, the UNH men's and women's hockey teams both hit the ice to promote mental health awareness and suicide prevention in what has become an annual tradition: a Stick it to Stigma game co-hosted by local non-profit organizations Connor's Climb Foundation and The Benny Fund. Admission is free to the women's game.

- Sixty-seven seconds into the game, Luisa Welcke corralled Ava Stevenson's lead pass through the defensive zone to break in alone through the right circle and wristed a low shot into the cage. Lilli Welcke passed the puck to Stevenson to earn the secondary assist.

- Juodikis swept a rebound in front of the net past Oakes' left leg pad to tie the score 1-1 at 8:53. The scoring sequence started when senior defender Rae Breton (Brighton, Ontario) snapped a shot from the high slot that junior forward Chavonne Truter (Uxbrige, Ontario) redirected on goal.

- Then at 12:45, Alyssa Wruble scored off a 2-on-1 rush with a shot that sailed between Harnett's legs to give the Black Bears the 2-1 lead.

- Shortly after, at 14:16, Pinto shot the puck from the left circle to the bottom right corner of the cage off Brooks' amazing wraparound from the slot to once again tie the score, 2-2.

- At 5:15, Mira Seregely fired a slapshot from the slot to the bottom right corner to give the Black Bears their third lead of the game, 3-2. Rahel Enzler recorded the assist on the play.

- At 9:24, Juodikis scored her second of the game and a power-play goal by battling at the left post and jamming her own rebound into the net. Pinto won control of the puck in the left corner, advanced along the boards and circled back to the corner before finding Juodikis to earn an assist.

- Then at 12:38, Thierus intercepted a pass and sniped the puck over the glove of Oakes from the left circle to give the Wildcats their first lead of the game, 4-3.

- Shortly afterward at 15:33, Emma Lange fired a screened shot from the high slot over the blocker of Harnett to forge the fourth tie of the game, 4-4. Ida Kuoppala, with the wrapaound the boards, and Kennedy Little, with the back pass to Lange from the left half-wall, set up the goal.

- Brooks led a 2-on-1 rush down the right wing and snapped a pass across the slot to the streaking Pinto, who one-timed it over the left pad of Oakes to give UNH a 5-4 lead at 18:41.

- Maine pulled Oakes in favor of an extra skater with 65 seconds on the clock, but Harnett stopped the only Black Bears' shot the rest of the way - Lange's chance with 32 seconds remaining - to preserve the one-goal lead.

- The Wildcats went 1-for-1 on the power play while the Black Bears went 0-for-5.

- The line of Pinto, Brooks and Juodikis combined to record eight of UNH's 11 points with totals of four goals and four assists.

- This was Pinto's first multiple-goal game as a Wildcat and third career two-goal game. The three points mark her best as a 'Cat and ties her career high done three times while at Mercyhurst College.

- This was Juodikis' third two-goal game of the season and fifth career. She now has three three-point efforts this season and four career.

- Brooks matched her career high of two assists. She has done that thrice this season and four times in her career.