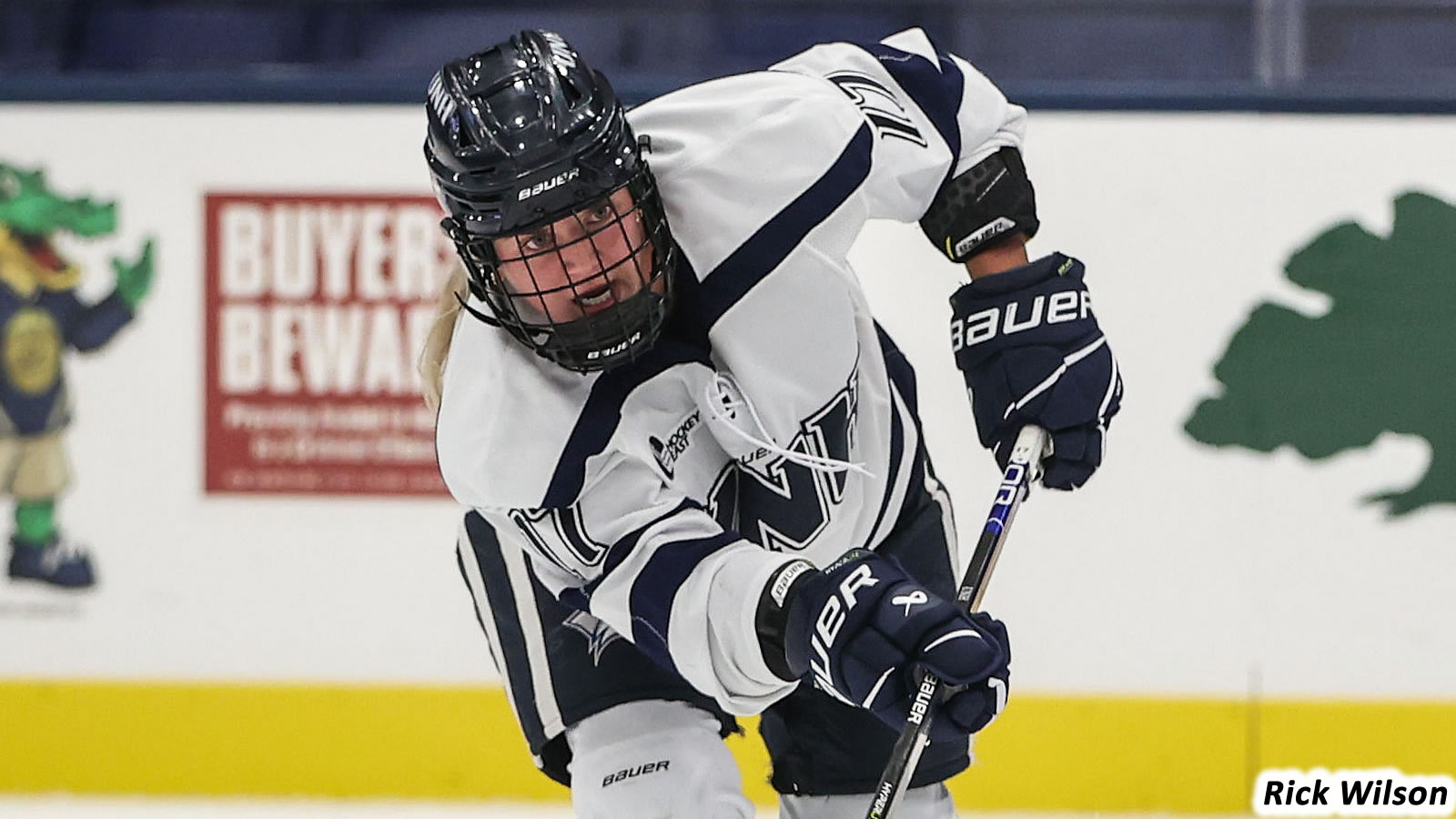 UP NEXT: The Wildcats will return to action on Friday and Saturday,

- This is the Wildcats' annual Stick it to Stigma game with the objective of promoting mental health awareness and suicide prevention.

- Gaby Roy corralled a loose puck off the right doorstep and deposited a shot into the net to give BC a 1-0 lead at 7:52.

- UNH went on the first power play of the game at 18:56 and scored with 8.2 seconds on the clock to tie the score 1-1. Brooks initiated the sequence with a diagonal pass from the left circle to junior Kyla Bent (Halifax, Nova Scotia) at the right point. She slipped the puck along the blue line and grad student Lauren Martin (Cambridge, Ontario) blasted a slap shot that Brooks, now positioned in the slot, redirected inside the left post.

- BC had a pair of quality scoring chances in the opening five minutes of the second stanza, but Boutilier turned aside Abby Newhook's screened wrister at 4:00 and then denied Kelly Browne from close range and Kate Ham in front off the rebound at 4:20.

- UNH had a 5-on-3 power play for 85 seconds, but Levy stopped all four shots to backbone BC's successful penalty kill.

- Alvarez pinched in from the point to score from a scrum at the top of the crease to give the Wildcats at 2-1 lead at 10:11 - 42 seconds after the Eagles killed the overlapping penalties. Junior Nicole Kelly (Brantford, Ontario), who took the initial shot, and classmate Chavonne Truter (Uxbridge, Ontario) were credited with assists.

- One minute later, UNH generated a 2-on-1 rush but the redirection off the stick of senior Annie Berry (Milton, Mass.) in the low slot was smothered by Levy.

- BC leveled the score, 2-2, at 16:49 when Guay's pass off the boards in the neutral zone was collected by Browne, who advanced down the slot and scored.

- Juodikis scored off her own rebound at the left post to put New Hampshire back on top, 3-2, 27 seconds into the final frame. Brooks advanced the puck through the neutral zone to Pinto, whose centering pass from the left wing found Juodikis charging down the slot.

- Guay snapped a shot from deep on the right side into the upper near corner of the net to forge the third tie of the game, 3-3, at 3:06. Newhook, who slipped the puck across the slot, and Hannah Bilka set up the tally.

- In the sixth minute, Boutilier made a reflex save to deny Caroline Goffredo and made a sprawling save off Jenna Carpenter's rebound in front to keep the score deadlocked.

- UNH regained the lead, 4-3, at 18:01. Senior forward Tamara Thiérus (Saint-Jérôme, Quebec) initiated the sequence by winning the battle for the puck on the end boards to Juodikis, whose backhanded pass found Brooks in front and she lifted a shot into the net.

- BC pulled Levy in favor of an extra skater with 1:35 remaining.

- The Wildcats won possession in the defensive zone, however, as both junior Charli Kettyle (Perth, Ontario) and Pinto chipped the puck up the boards to the neutral zone. Brooks skated onto the loose puck and advanced down the slot before firing the puck past a BC defender into the open net at 18:55.

- The Eagles went on a power play with 29.6 seconds remaining, called time out and once again pulled Levy in favor of an extra skater.

- Boutilier made one save - denying Bilka with 10 seconds on the clock - the rest of the way to secure the win.

- The line of Pinto, Brooks and Juodikis combined for eight points with four goals and four assists.

- The three goals and four points were both career highs for Brooks; she scored two goals Jan. 23, 2021 vs. Merrimack College and had a best of two points 11 times.

- The previous time a Wildcat recorded 4+ points in a game was Oct. 22, 2017, when Meghara McManus tallied five points (one goal, four assists).

- Brooks has six points (three goals, three assists) the past two games and a three-game point streak with seven points (3-4-7).

- Brooks was also the top 'Cat in the faceoff circle with 13 wins.

- Juodikis extended her point streak to three games; she has three goals and three assists for six points in that span.

- Pinto's two assists tied her personal best, which she has now done eight times. She also extended her goal streak to three games with three goals and three assists.

- Grad student Gabby Jones (Westfield, Mass.) was strong in the faceoff circle with 10 wins in 15 draws.

- This is UNH's second win against a nationally-ranked team this season. The Wildcats previously defeated No. 14 UConn, 4-0, at the Whitt on Dec. 2.