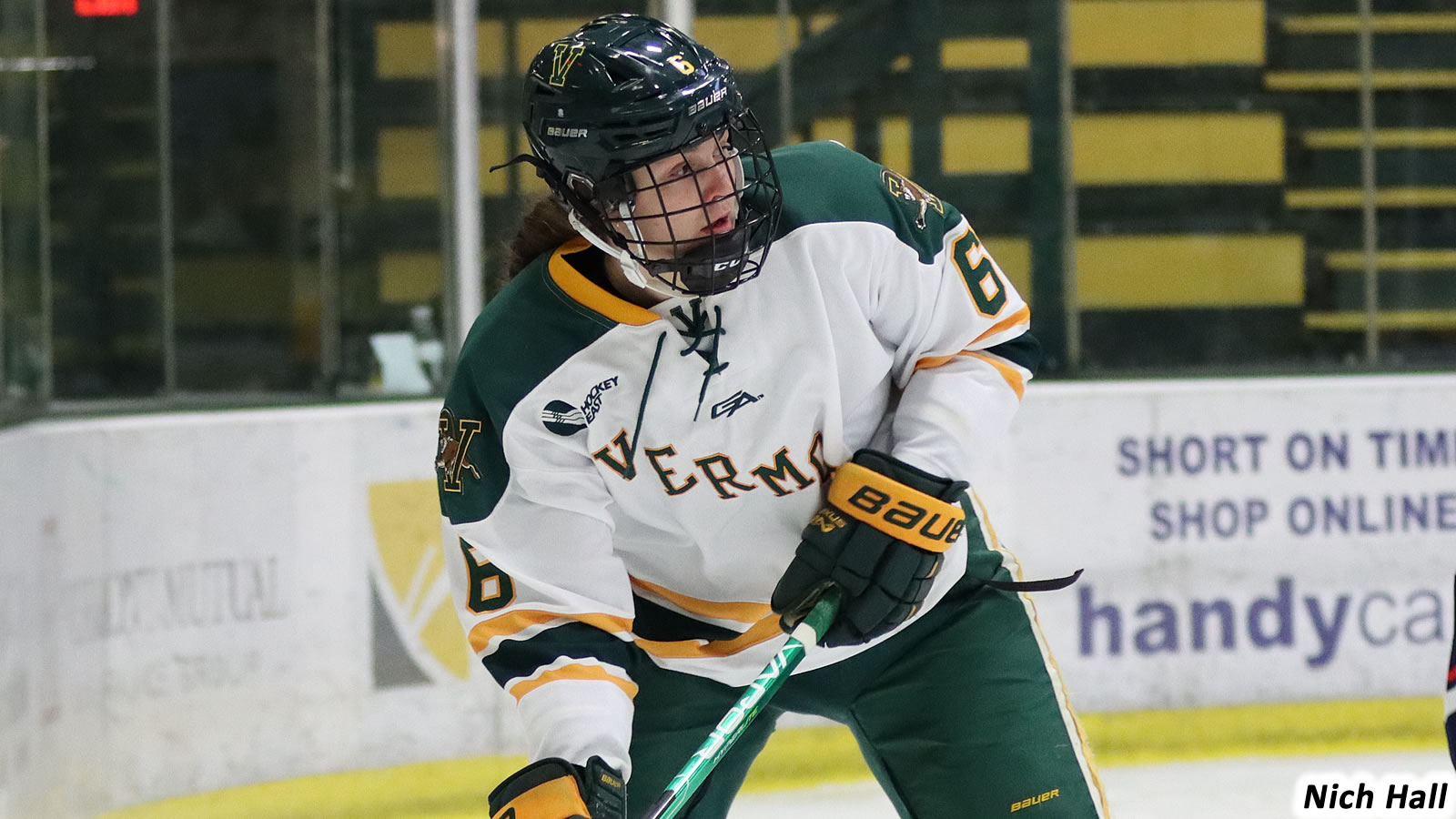 BURLINGTON, Vt. - The 11th ranked Vermont women's hockey team defeated Holy Cross 3-1 Friday night during their annual Pack the Gut Challenge presented by the Windjammer. The Catamounts set a new women's Hockey East attendance record for a game on a campus site with 2,210 fans. With the win Vermont improves to 17-8-1 this season and 12-6-1 in league play.

"What a great crowd we had tonight and we really got the energy," Head Coach Jim Plumer said. "It was important for us to get off to a good start and get the crowd into the game so it was key to get that first period goal. Evelyne Blais-Savoie was outstanding and Corinne McCool was clutch again with the game-winner. Congrats to Jessie McPherson for setting the single season win record as well. The MVP of the game though, were the 2,210 who helped us break the Hockey East attendance record. I hope they'll be back tomorrow!"

- Evelyne Blais-Savoie opened the scoring for the Catamounts 7:43 into the first period. Anna Podein dumped the puck into the Holy Cross zone and Hailey Burns was first to the puck behind the net. She found Blais-Savoie as she cut to the net and Blais-Savoie ripped a shot bar down for her ninth goal of the season.

- After sustaining pressure throughout the second period the Catamounts finally doubled their advantage with 23 seconds left in middle frame. From the point Corinne McCool fired a hard-low shot through traffic that the Crusaders' Brooke Loranger never saw. McCool's 10th of the year was assisted by Natálie Mlýnková and Theresa Schafzahl.

- Midway through the third period the Crusaders cut the Vermont lead in half. On a broken play Sofia Smithson fired on net and Jessie McPherson made an initial save but the rebound came to Mary Edmonds who stashed it home for her eighth of the season.

- Holy Cross pulled its goaltender in the final moments of the third searching for an equalizer. With 28 seconds left Maddy Skelton drew a penalty on Holy Cross all but icing the contest.

- Just 11 seconds into that power play Blais-Savoie struck again to cap the exceptional night in Catamount Country. McCool one-timed a feed from Schafzahl and Blais-Savoie was left with a tap-in rebound.

- Jessie McPherson picked up her 16th win of the season tonight re-setting her own program single season record. Her 16 wins is tied for the fourth most in the NCAA this season.

- This evening was Evelyne Blais-Savoie's third career two-goal game, all of which have come this season.

- With Providence's shootout loss against UConn tonight the Catamounts have reestablished sole possession of second place in Hockey East with 40 points. UVM sits two points ahead of PC and five ahead of UConn. UVM also has two games in hand on PC and one on UConn.

Vermont is back in action tomorrow evening as they host No. 7 Northeastern in the two teams' final Hockey East regular season matchup of the season at 4 p.m. Saturday's contest will air live on ESPN+ with Rob Ryan on the call. The game will also be available on a pay-per-view basis outside of North America at https://portal.stretchinternet.com/hockeyeast. Subscriptions to the service are available for $9.99 USD per month or $4.99 USD for individual games.