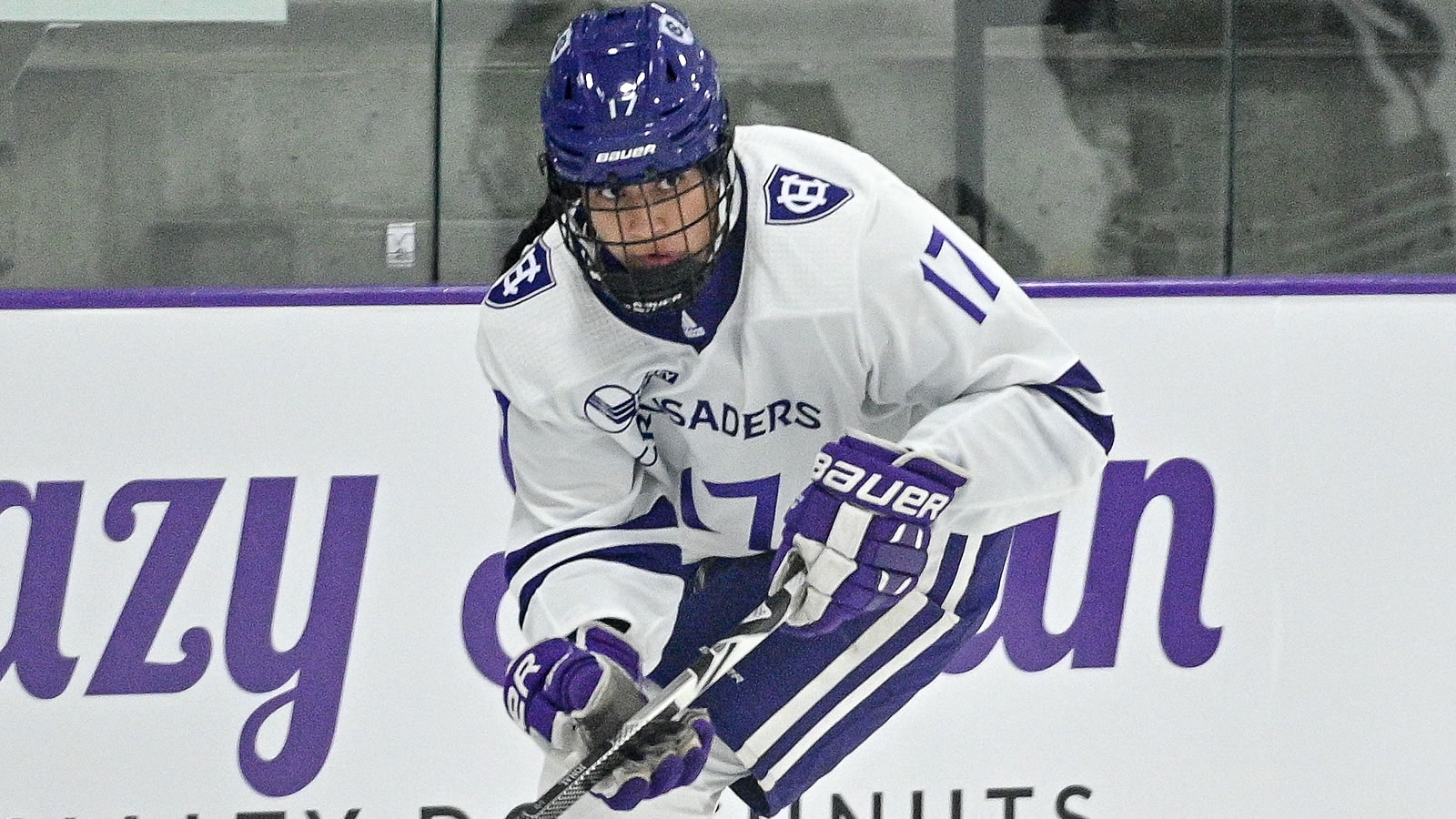 - Holy Cross received the first power play of the game early in the first period. They managed three shots on goal, but they were turned away by Warrior goalie, Emma Gorski.

- Merrimack scored the first goal of the game shortly after the power play ended, taking an early lead at 6:13 in the first period.

- Merrimack sent a skater to the box for interference. Senior Darci Johal took advantage of the power play and snuck the puck through the legs of Gorski at 8:45 in the first. She was assisted by seniors Sofia Smithson and Kailey Langefels.

- The score remained the same with each team posting 10 shots on goal by the end of the first period.

- Johal posted her second power play goal of the night, giving Holy Cross its first lead at 2:40 in the second period. She was assisted by senior Mary Edmonds and Smithson.

- Freshman Alexia Moreau possessed the puck, then got stuck along the boards. Junior Bryn Saarela swept it free and fed it to sophomore Emilie Fortunato. Fortunato skated into the offensive zone on a breakaway and rocketed the puck past Gorski at 15:56 in the second period.

- The Crusaders held a two-goal lead heading into the third period.

- The Warriors continued to find themselves in penalty trouble, picking up their fourth of the night for too many skaters at 2:19 in the third. Saarela added the Crusaders' fourth goal with seven seconds remaining in the power play. She was assisted by sophomore Carmen Elliott and Langefels.

- Moreau added the final goal of the night at 18:27 in the third. She was assisted by Saarela and Smithson.

- Johal posted a single game career-high two goals, marking four on the season. She brings her point total to nine.

- Saarela added one goal and two assists to her season total. She holds the second-highest point total with 12, from five goals and seven assists.

- Smithson notched three assists and now holds the highest assist total with eight. She owns the third-highest point total with 11.

- Edmonds posted her fifth assist of the season, adding to a career-high season total 13 points. She leads the team in points and goals (8). She has tallied eight points in her last eight games.

- Moreau tallied the first assist of her career. She later notched her sixth goal of the season, bringing her point total to seven.

- Langefels tallied her sixth and seventh assist of the year.

- Fortunato scored her first goal of the season.

- Holy Cross remains on the road as they prepare to play No. 7 Northeastern on Jan. 27. The Crusaders will travel to Boston, Mass. for a 3 p.m. puck drop.